Protein imaging equipment enables enzymes to be observed in real-time

The imaging equipment, European XFEL, is said to mark a new age of protein movie-making and enables enzymes involved in disease to be observed in real-time. 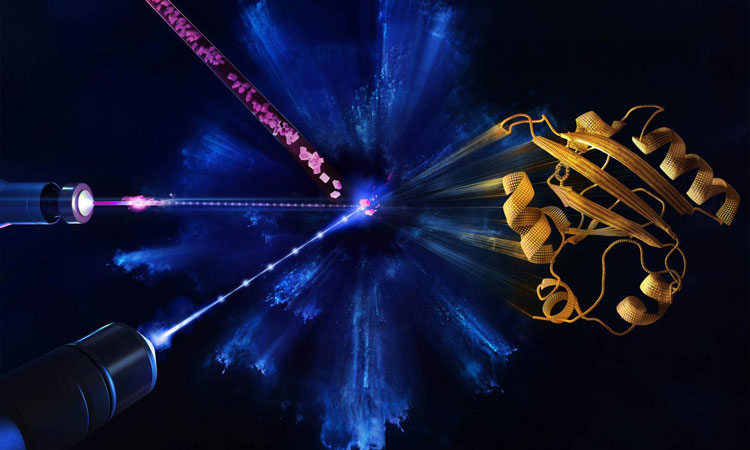 Microcrystals are injected (top, left) and a reaction is initiated by blue laser pulses hitting the proteins within the crystals (middle, left). The atomic structure of the protein (right) is probed during the reaction by the X-ray pulses (bottom, left). At the European XFEL, femtosecond optical laser pulses match the X-ray pulses that fire at a megahertz rate. X-ray pulses are six orders of magnitude larger than that at other X-ray sources. This makes it possible to produce diffraction patterns for nearly any protein, yielding still images recorded over rapid time increments that form molecular movies (credit: European XFEL/Blue Clay Studios).

Building on testing of the imaging equipment European X-ray Free-Electron Laser (or EuXFEL), that has the speed to see molecules changing and interacting, a team of physicists from the University of Wisconsin-Milwaukee, US has completed the facility’s first molecular movie or ‘mapping’ of the ultrafast movement of proteins.

This allows scientists to observe how proteins do their jobs or how their shape-changing goes awry, causing disease. Their findings are said to mark a new age of protein research that enables enzymes involved in disease to be observed in real-time for meaningful durations in unprecedented clarity.

“Creating maps of a protein’s physical functioning opens the door to answering much bigger biological questions,” said Marius Schmidt, a UWM professor of physics who designed the experiment. “You could say that the EuXFEL can now be looked on as a tool that helps to save lives.”

The EuXFEL produces intense X-rays in short pulses at a megahertz rate – a million pulses a second. The rays are aimed at crystals containing proteins, in a method called X-ray crystallography. When a crystal is hit by the X-ray pulse, it diffracts the beam, scattering in a certain pattern that reveals where the atoms are and producing a ‘snapshot’.

The rapid-fire X-ray pulses produce two-dimensional (2D) snapshots of each pattern from hundreds of thousands of angles where the beam lands on the crystal. Those are mathematically reconstructed into moving three-dimensional (3D) images that show changes in the arrangement of atoms over time.

The European XFEL, has taken this atom-mapping to a new level, the scientists say. Powerful bursts contain X-ray pulses at a quadrillionth of a second, in ‘bursts’ that occur at 100 millisecond intervals.

Schmidt’s experiment began with a flash of blue, visible light that induced a chemical reaction inside the protein crystal, followed immediately by a burst of intense X-rays in megahertz pulses that produce the ‘snapshots’.

Schmidt, a biophysicist who has participated in more than 30 XFEL imaging projects to date, said he has witnessed how multiple proteins work together, how enzymes responsible for antibiotic resistance disable a drug and how proteins change their shape in order to absorb light and enable sight.

The paper was published in Nature Methods.