Researchers reveal a reduction in the number of eosinophil immune cells in belly fat with age may be the underlying cause of many age-related conditions with chronic low-grade inflammation. 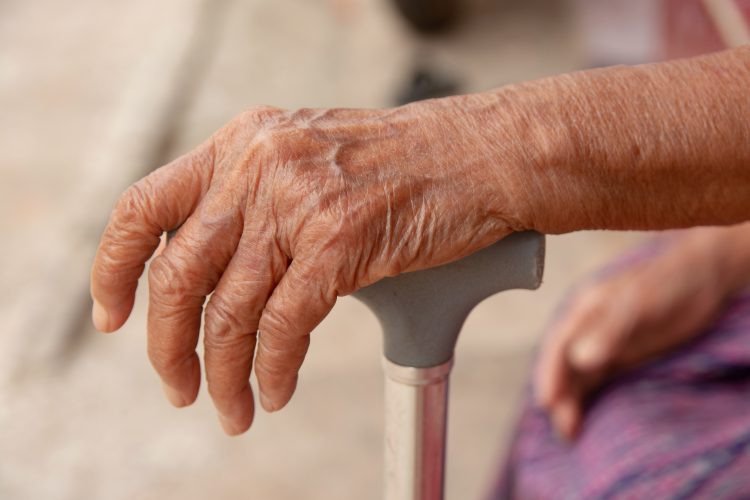 Elderly people are particularly at risk of infection by COVID-19 and many other infectious diseases, due to the age-related decline in their immune function. This has two key implications for immunology: first, people become increasing vulnerable to infections as they age, and second, vaccination become less and less effective, as elderly people fail to mount a sufficient immune response. This group are also commonly affected by frailty and so, as the size of our aging population grows, the burden of age-related health issues does too.

In a new study, researchers from the Department for BioMedical Reserarch (DBMR) and the Institute of Pathology at the University of Bern as well as the University Hospital Bern (Inselspital), all in Germany, have demonstrated that visceral adipose tissue (belly fat) has a crucial role in the development of chronic low-grade inflammation, thought to be the cause of many age-related health disorders.

According to the paper in Nature Metabolism, certain immune cells (called eosinophils) in the visceral fat play an essential role in regulating chronic low-grade inflammation and downstream aging processes. The team also demonstrated in their research that transferring eosinophils from healthy donors could reverse these processes. 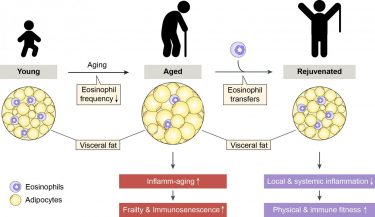 With age the frequency of adipose tissue eosinophils decreases gradually. This leads to the production of inflammatory mediators, which promote age-related impairments (e.g. frailty and immunosenescence). Eosinophil cell transfers increase the frequency of these cells in adipose tissue and dampen age-related chronic low-grade inflammation. This results in systemic rejuvenation of the aged organism [Credit: DBMR, University of Bern, D. Brigger].

Dr Mario Noti, formerly at the Institute of Pathology and Dr Alexander Eggel from DBMR revealed that eosinophils, which are predominantly found in circulation, also occur in the visceral adipose tissue of humans and mice. Typically these cells help the body defend against parasitic infections or promote allergic reactions; however, in belly fat they are responsible to maintain local immune homeostasis.

Rejuvenating the elderly and frail

The team then investigated if they could reverse age-related conditions by redressing the imbalance in the visceral adipose. “In different experimental approaches, we were able to show that transfers of eosinophils from young mice into aged recipients resolved not only local but also systemic low-grade inflammation,” says Dr Eggel.

Dr Noti added: “In these experiments, we observed that transferred eosinophils were selectively homing into adipose tissue.” The team said the therapy had a rejuvenating effect on the aged mice, which showed significant improvements in physical fitness as assessed by endurance and grip strength tests. The eosinophil transfers had a rejuvenating effect on the immune system manifesting in improved vaccination responses of aged mice.

“Our results indicate that the biological processes of aging and the associated functional impairments are more plastic than previously assumed,” said Dr. Noti.

Importantly, the observed age-related changes in adipose immune cell distribution in mice were also confirmed in humans and Dr Eggel concluded: “A future direction of our research will be to now leverage the gained knowledge for the establishment of targeted therapeutic approaches to promote and sustain healthy aging in humans.”

The hope of rejuvenation: using plasma to reverse ageing in mice…