Binding of SARS-CoV-2 spike proteins to the brain’s endothelial cells can cause the blood-brain barrier to become leaky, potentially causing the neurological symptoms associated with COVID-19. 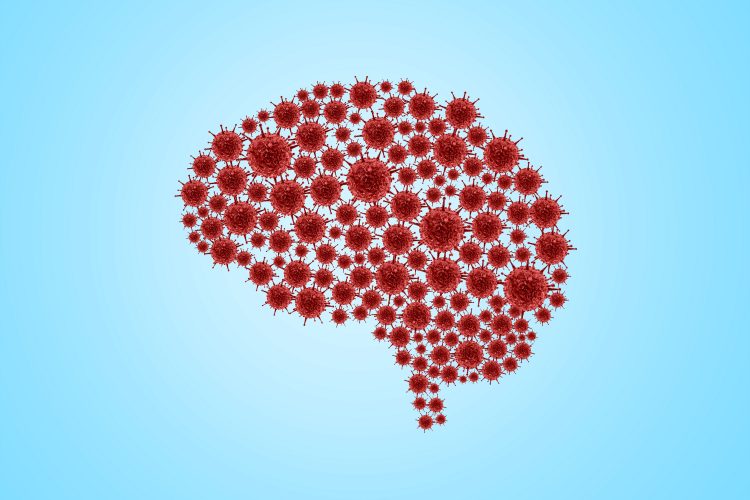 While the causes of respiratory symptoms related to SARS-CoV-2 infection have been well studied, the vascular and neurological symptoms are more poorly understood.

In the case of respiratory symptoms, it is known that entry of the SARS-CoV-2 virus into host cells triggers an immune response, primarily in the lungs because it is an airborne pathogen. However, there is increasing evidence that blood vessel inflammation is key to the severity of COVID-19 (the disease caused by SARS-CoV-2 infection). Further, some 30 to 80 percent of patients experience neurological symptoms associated with the infection, including dizziness, headache, nausea and loss of concentration. These symptoms suggest that SARS-CoV-2 also affects cells of the central nervous system (CNS).

There is currently no evidence that the virus can invade the brain; however, a paper published in Neurobiology of Disease shows that the SARS-CoV-2 cell surface spike (S) proteins can bind to the endothelial cells that form the blood-brain barrier. According to the paper, S binding causes the barrier to become leaky, potentially disrupting the delicate neural networks within the brain and enabling SARS-CoV-2 neuroinvasion and infection.

“Previous studies have shown that SARS-CoV-2 infects host cells by using its spike proteins to bind to the angiotensin converting enzyme 2 (ACE2) on the host cell surface,” explained Dr Servio Ramirez, Professor of Pathology and Laboratory Medicine at the Lewis Katz School of Medicine at Temple University, US, and principal investigator on the new study.

ACE2 is expressed on endothelial cells, which form the inner lining of blood vessels, as well as the blood-brain barrier, and have a pivotal role in mediating different functions of the cardiovascular system. According to Dr Ramirez, “since ACE2 is a major binding target for SARS-CoV-2 in the lungs and vasculature of other organs in the body, tissues that are behind the vasculature – that receive blood from affected vessels – are at risk of damage from the virus.”

However, it has been unclear whether ACE2 is also present in the brain vasculature, or whether its expression changes in health conditions that worsen COVID-19, such as high blood pressure (hypertension). To establish this, the team examined post-mortem human brain tissues from a variety of individuals, including those without underlying health conditions and those who has hypertension and dementia. The analyses revealed that ACE2 is expressed throughout blood vessels in the frontal cortex of the brain and is significantly increased in the brain vasculature of those with a history of hypertension or dementia.

The team then investigated what effects SARS-CoV-2 S protein binding would have on brain endothelial cells in cell culture models. According to the team, introducing the S protein – particularly a portion called subunit 1 – resulted in substantial changes in endothelial barrier function that led to declines in barrier integrity. The researchers also observed that subunit 2 of the S protein can directly impact blood-brain barrier function. Postdoctoral fellow and first author on the new report, Dr Tetyana Buzhdygan explained: “This is of importance because unlike subunit 1, subunit 2 of the spike protein does not bind to ACE2, meaning that a breach to the blood-brain barrier could occur in a manner that is independent of ACE2.”

“Our findings support the implication that SARS-CoV-2, or its shed spike proteins circulating in the blood stream, could cause destabilisation of the blood-brain barrier in key brain regions,” Dr Ramirez said. “Altered function of this barrier, which normally keeps harmful agents out of the brain, greatly increases the possibility of neuroinvasion by this pathogen, offering an explanation for the neurological manifestations experienced by COVID-19 patients.”

While the long-lasting effects of altered blood-brain barrier function in the presence of SARS-CoV-2 are unknown, the expression of ACE2 being so heightened in the brains of those with existing comorbidities in which the vasculature has already suffered injury could result in extensive neurological damage, according to the study authors.

Dr Ramirez concluded that the SARS-CoV-2 genome has yet to be discovered in the specific cell types of the brain, so “the next steps in our work are to look for genomic viral copies in different parts of the brain using autopsy material from COVID-19 cases and to investigate the pathogen’s ability to neuroinvade using different cell culture and tissue-engineered constructs.”

2 responses to “SARS-CoV-2 can disrupt the blood-brain barrier, find scientists”