Scientists have shown how SARS-CoV-2 induces changes in the architecture of host cells to drive replication and made their data available to all. 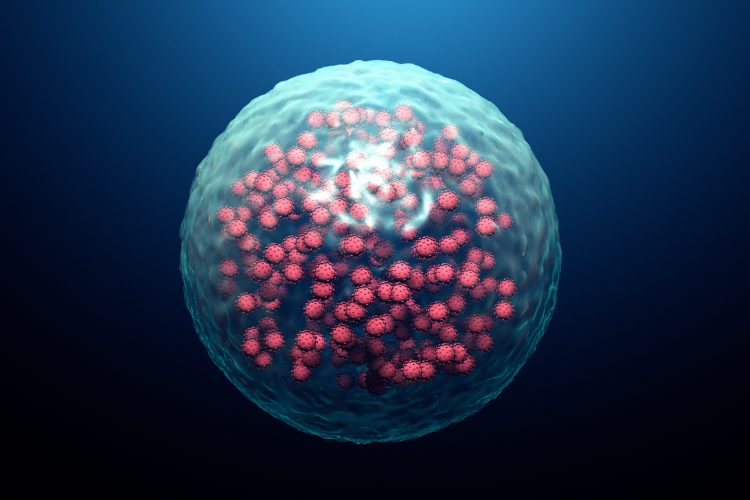 Researchers have demonstrated that the SARS-CoV-2 virus changes the intracellular structure of infected host cells; creating organelles which function solely to replicate the viral genome within only a few hours of infection. The team believes this is why infected cells die so quickly and hope that the information collected in their imaging studies will help in the development of antiviral drugs.

Ralf Bartenschlager, professor in the Department of Infectious Diseases, Molecular Virology at Heidelberg University, Germany, said: “By now we can expect the [SARS-CoV-2] coronavirus to become seasonal. Thus, there is an urgent need to develop and implement both prophylactic and therapeutic strategies against this virus.” He explained that, in order for drugs to be developed that can successfully combat SARS-CoV-2 replication in infected cells, a better understanding of the biological mechanisms driving the virus’ replication cycle is essential.

The team said their primary objective was to identify the morphological changes within SARS-CoV-2 infected cells that force them to produce viral progeny, even as it causes their own death. 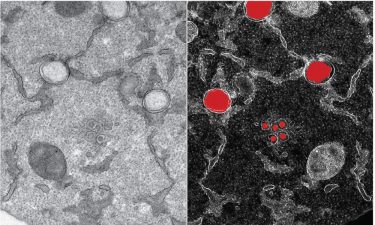 A portion of an infected cell is observed by transmission electron microscopy, in which SARS-CoV-2-specific structures (in red, from the mirrored image on the right) can be detected as early as six hours after infection. The virus’s genome is replicated in high copy number in two membrane layers forming a big balloon (large structures in red), which forms a very shielded compartment. New virions (small structures in red) are being formed by budding at the interface of the endoplasmic reticulum and Golgi apparatus [Credit: Yannick Schwab/EMBL].

Using state-of-the art imaging techniques they determined the three-dimensional (3D) architecture of SARS-CoV-2-infected cells and identified alterations caused by the virus. Bartenschlager explained that their 3D reconstructions of whole cells and their subcellular compartments showed that virus induces changes to the membranes within host cells – producing its own replication organelles where the viral genome is amplified.

According to the researchers, to achieve this it exploits the cellular endomembrane system, a system that enables the cell to define different compartments and sites. However, the replication organelles produced by the virus are distinct from normal organelles; the scientists describe it as a massive accumulation of bubbles, where two membrane layers form a big balloon. They said that within these balloons – which form a very shielded compartment – the viral genomes are multiplied and released to the Golgi Apparatus and Endoplasmic Reticulum where they are incorporated into new viral particles. 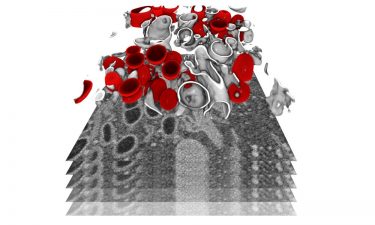 Infected cells were imaged by focused ion beam scanning electron microscopy, a powerful technique to reveal the organisation of a cell at the subcellular level in 3D. In this image, a subvolume of one cell was segmented to display membrane-bound organelles (in grey) and double-membrane vesicles (in red) – a virus-specific compartment where the viral genome is replicated in large quantities [Credit: Julian Hennies/EMBL].

Their paper states the change in cell architecture is visible only a few hours after infection. The authors added that until now little was known about how SARS-CoV-2 affects human cells, other than how it enters them, and that their new understanding of how the infection leads to cell death will foster the development of therapies reducing virus replication and, thus, disease severity.

They stated that their data, and in particular the repository of 3D structural information about virus-induced substructures, can be accessed by everyone. Schwab said: “I believe we are setting a precedent on the fact that we are sharing all data that we produced with the scientific community… This way we can support the global effort to study how SARS-CoV-2 interacts with its host.”

The team concluded that they hope their information will help in the development of novel antiviral drugs for SARS-CoV-2.

The study was published in Cell, Host & Microbiome.