Having revealed the activation mechanism and functional states of A2AR signalling, a GPCR, researchers say this could aid drug discovery. 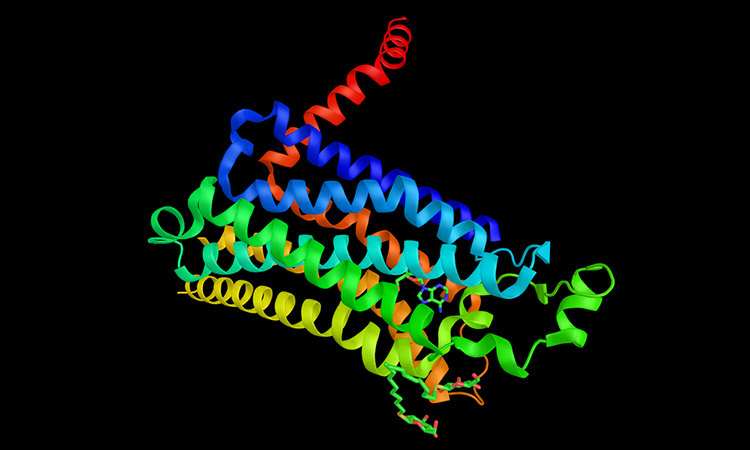 A multinational research team has carried out experimental and computational studies, revealing key steps associated with the activation of the human adenosine A2A receptor (A2AR). According to the team, A2AR is a member of the superfamily of G protein-coupled receptors (GPCRs), which engage the G protein and initiate cell signalling.

The scientists were led by Dr Adnan Sljoka from RIKEN, Japan, and Professor R Scott Prosser from the University of Toronto, Canada. 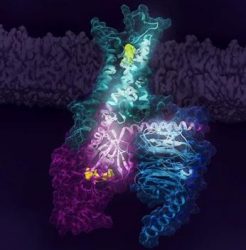 Activation of the human A2AR (turquoise) in complex with a G protein consisting of the α, β and γ subunits (shown in violet, light blue and dark blue, respectively), is exquisitely controlled by changes in dynamics and action of the ligand, highlighted in lime at the top of the figure. Activation pathways are observed to extend from the ligand binding site (lime) to the nucleotide binding site (yellow) in the G protein [credit: Cell].

The researchers explain that GPCRs affect almost every aspect of human physiology, with 35 percent of all approved drugs acting on GPCRs. In most cases, GPCRs are situated in the plasma membrane that surrounds the cell while the drug or ligand that acts on the GPCR binds to an extracellular pocket. Activation is then transduced across the receptor, resulting in complexation with proteins on the cell interior. Since input arrives at the cell exterior and initiates signalling pathways inside the cell, this makes GPCRs useful in pharmacology as the drug in many cases need not enter the cell. However, GPCR activations relate to dynamic events and key intermediate states that arise between the time that a ligand binds and when the G protein is activated. Capturing conformational dynamics of GPCRs and description of intermediate states and its role in activation and signalling has been a formidable challenge, which has hampered progress in understanding activation mechanisms of GPCRs.

A2AR is a well-known GPCR that is distributed in the nervous system, platelets, immune cells, lungs, heart and vasculature. A2AR drugs have been developed to address wound healing, vascular diseases, including atherosclerosis, restenosis and platelet activation, in addition to inflammation and cancer. Thus, understanding its functional states associated with receptor signalling can yield new opportunities in pharmacology and general understanding of GPCR activation mechanisms. 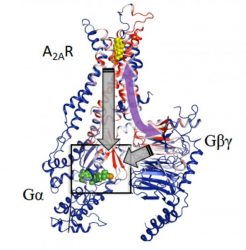 Computational analysis based on modelling and mathematical rigidity theory identifies an activation network pathway encompassing the receptor A2AR, the Gβγ subunit and the Gα subunits of G-protein, harbouring the nucleotide (green). Gβγ subunit was discovered to be critical for signalling and sampling of fully active states of receptor resulting in optimal receptor activation [credit: Cell].

Using Fluorine-nuclear magnetic resonance (19F-NMR), mathematical rigidity theory and molecular dynamics simulations, the team discovered the key mechanism of activation of A2AR as it proceeds through the signalling pathway. The researchers focused on biasing key conformational states of A2AR by complexing it with G protein and different ligands to better understand signal transduction and receptor activation.

The researchers also used molecular dynamics simulations to create a structure of A2AR bound to heterotrimer G-protein complex, where rigidity theory methods identified an activation pathway where A2AR initiates communication with the G protein which traverses the receptor’s ligand binding site and G-protein. The Gβγ subunit was discovered to serve as a critical domain for facilitating signalling and activation.

The team conclude that understanding the activation mechanism and functional states of A2AR signalling may provide new opportunities for drug discovery.