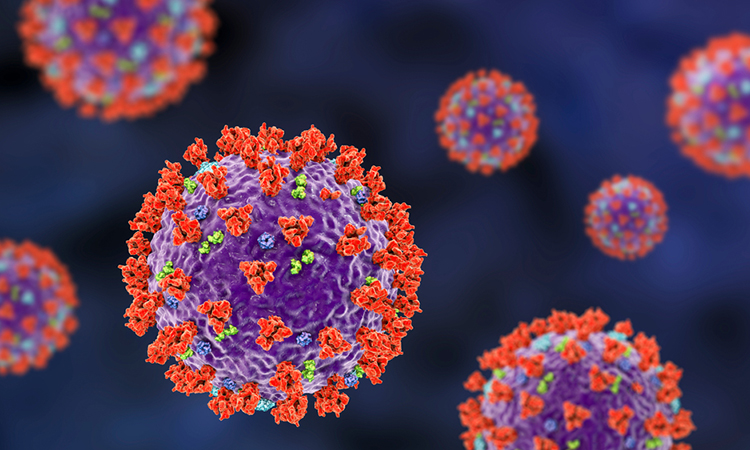 New research has demonstrated that fragment screening could provide a strategy to develop directly-acting antivirals with novel modes of action that would combat COVID-19 by suppressing the SARS-CoV-2 viral infection. The study was conducted by a team from the University of Oxford, UK, and the University of California San Francisco (UCSF), US, in collaboration the XChem platform at Diamond Light Source, the UK’s national synchrotron.

The researchers focused on the macrodomain of the Nsp3 gene product that SARS-CoV-2 uses to suppress the host cell’s natural antiviral response. This part of the virus’s machinery, also known as Mac1, is essential for its reproduction – previous studies have shown that viruses that lack it cannot replicate in human cells, suggesting that blocking it with a drug would have the same effect.

Fragment screening is an approach to identify building blocks of a future drug molecule, observing how they interact with the protein under study, contextualising those interactions and providing starting points for molecules that directly influence the biology of the protein. The researchers say this method significantly reduces the number of compounds that need to be screened to find one that binds, while still informing a broad range of potential molecules. Doing the experiment through structural biology yields this information directly in three dimensions (3D), greatly accelerating the design process and ensuring a far more cost-effective overall experiment.

The current study involved a crystallographic fragment screen of the Nsp3 Mac1 protein. The team discovered 234 fragment compounds that directly bind to sites of interest on the surface of the protein. According to the researchers, these fragments cover a wide range of chemical motifs.

The UCSF collaborators also used another innovative drug discovery technique, computational docking. This deploys computer models and simulations to assess the likely interactions of virtual molecules for favourable interactions with Mac1 and their promise as starting points for drug discovery. The team identified 60 candidates from a virtual library of 20 million molecules, which were then experimentally tested using X-ray crystallography, yielding 20 good hits.

“Robustly identifying this kind of chemical matter for promising and tractable targets like Nsp3 is a first step in rational drug discovery. This is always a long journey fraught with difficulty and failure, but the battery of new structural biology methods that we combined in this study, including fragment screening at Diamond and computational docking at UCSF, are helping to change drug discovery and make it easier to find effective drug candidates,” commented Principal Beamline Scientist, Frank von Delft.

The next steps are to design more elaborate molecules that combine the observed themes, synthesising them and confirming experimentally whether they strongly bind the protein and have a biological effect. The most promising compounds can then be progressed in fully-fledged drug discovery programmes.

The team say the mapped out chemical motifs and protein-compound interactions can be utilised by researchers and pharmaceutical companies to design compounds that could be developed into antiviral drugs.

“This is a significantly higher-than-random hit rate, validating the new specific docking methodologies developed by our UCSF colleagues. The high quality structural data of Mac1 that we obtained by X-ray crystallography was essential, but the validation of the approach means that in future, we have additional power for exploring compounds that are not physically available. Overall, this work not only accelerates our ability to validate whether targeting NSP3 Mac1 is an effective way to develop antivirals, but it also is hugely valuable in improving the template of methodologies for future inhibitor discovery and development throughout the community of drug discovery,” concluded von Delft.