Mitochondrial DNA (mtDNA) mutations cause severe disorders that are untreatable and mostly affect the nervous system. The difficulty in funding therapies may also be explained by the lack of viable modelling systems… 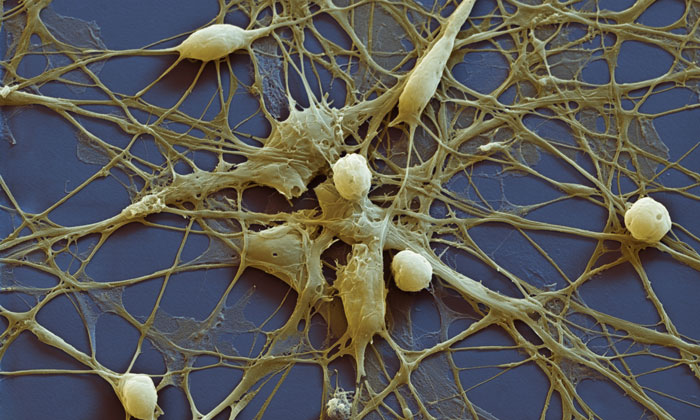 Animal models are scarce due to the challenge of mtDNA engineering and cell types used for compound screening are mostly limited to peripheral cells from patients or immortalised cell lines. However, these cells do not share the same functional and metabolic features of the nervous system cells that are affected in patients. We recently showed that neural progenitor cells (NPCs) differentiated from patient-derived induced pluripotent stem cells (iPSCs) represent an effective drug discovery cell model for mtDNA disorders. We believe that their use may pave the way for the identification of novel therapeutics against these hitherto incurable human diseases.

The major task of mitochondria is to produce energy in the form of ATP, which is used by every cell. The functionality of the mitochondria is under the control of both the nuclear and the mitochondrial genome. Mitochondrial DNA (mtDNA) encodes for only 37 genes encoding for proteins of the electron transport chain (ETC) and ATP synthase located in the inner mitochondrial membrane. mtDNA is exclusively maternally inherited and is present in multiple copies within each cell. This latter feature is very important for understanding the pathogenesis of mtDNA mutations. In fact, a certain mutation can be either homoplasmic, when it is present in all the mtDNA copies, or heteroplasmic, when it is present in only some of the mtDNA copies. The level of heteroplasmy can associate with the biological effect of the mutation.

Mutations in mtDNA occur with a minimum disease prevalence of one per 5,000.1 Deletions or point mutations have been reported in virtually every mtDNA gene. The mutations are strongly linked to diseases affecting the nervous system with various clinical phenotypes ranging in severity from asymptomatic to fatal within the first years of life.2,3 Importantly, no effective treatment exists for mtDNA diseases.

One of the major hurdles for the discovery of therapies is the paucity of model systems available. In fact, it has been difficult to develop animal models for mitochondrial disease, due to challenges inherent in engineering mtDNA. Existing cellular models lack the functional and metabolic features of neural cells. Moreover, they do not provide the patient-specific match between mitochondrial and nuclear genomes. This aspect is crucial, since specific characteristics of an individual nuclear DNA may influence the course of these diseases.

A decade ago, Shinya Yamanaka demonstrated that adult somatic cells can be reprogrammed into embryonic-like cells.4,5 The resulting cells, dubbed induced pluripotent stem cells (iPSCs), share the same properties as embryonic stem cells (ESCs). In addition, iPSCs can be derived from every individual from easily accessible peripheral cells. Hence, iPSCs do not have any ethical limitations. More importantly, iPSCs retain the ability to differentiate into cell types of the body, including non-accessible cells like those belonging to the central nervous system.

With the progress of iPSC technology, modelling of complex neurological diseases is now possible. Patient-derived cells can be reprogrammed to iPSCs and further differentiated into neuronal cells. Using this approach, several kinds of human neuronal subtypes can be obtained in a dish, including midbrain dopaminergic neurons,6,7,8 GABAergic neurons,9,10 and serotonergic neurons.11

Unfortunately, however, neuronal differentiation from iPSCs is cumbersome, costly, and extremely time-consuming. Complex protocols are necessary to reach neuronal maturation and appropriate expression of protein markers. Furthermore, the obtained cultures are mostly heterogeneous with batch-dependent differences.12,13,14 Therefore, several hurdles need to be overcome to allow the use of iPSC-derived neurons in high-throughput (HT) studies. In fact, HT drug discovery platforms require the reproducibility and robustness of the cell model used. Targeting mitochondrial diseases with iPSC-derived NPCs In order to advance our understanding of the pathogenetic mechanisms of mitochondrial disorders, it is therefore critical to establish appropriate model systems. These systems should fulfil three main properties: 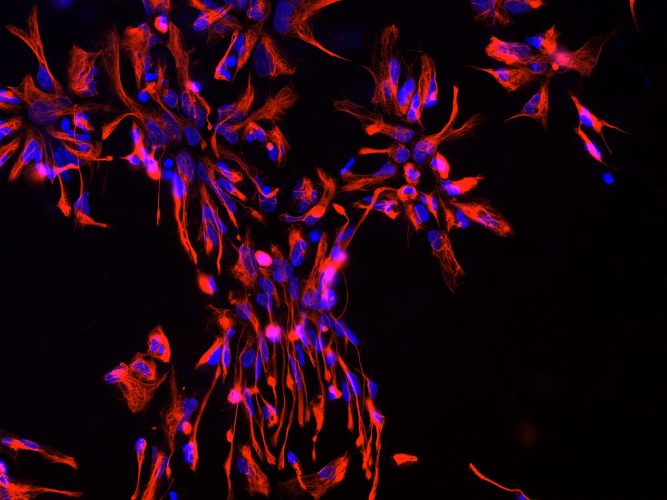 Many of the differentiation protocols used for neuronal generation from iPSCs require the intermediate induction of neural progenitor cells (NPCs). NPCs are multipotent cells that can give rise to both neurons and glia (Figure 1). In vivo, NPCs enable neurogenesis even in the adult human brain15,16 and are located in defined brain regions, ie, the subgranular zone of the dentate gyrus in the hippocampus and the subventricular zone of the cortex.17,18 In vitro, NPCs can be rapidly produced from iPSCs using different strategies, including the formation of embryoid bodies (EBs) followed by manual isolation of NPCs from neural rosettes.19,20 As a rapid alternative, small molecules can be applied to convert iPSCs directly into NPCs in only one week.21,22 Importantly, our recent data showed that the transcriptomic iPSC-derived NPCs are similar to that of brain-derived NPCs.23

In comparison to fully mature neurons, NPCs may hold key advantages for drug discovery applications.24 First, NPCs can be readily obtained from iPSCs in a cost-effective fashion. Second, the resulting cell population is mainly homogeneous and does not require additional purification steps. Third, NPCs are proliferative, which makes their cultivation and expansion relatively feasible.

In order to employ NPCs for mitochondrial diseases, it is important to determine whether the cells rely on functional mitochondrial metabolism. We and others demonstrated that during the generation of NPCs from human and mouse PSCs, mitochondria undergo a functional maturation.23,25 This maturation leads to elongated organelle morphology with clearly defined cristae. In parallel, there is an increase in mitochondrial mass and mtDNA content.26 This remodelling of mitochondrial morphology during NPC derivation is associated with a metabolic shift towards oxidative phosphorylation (OXPHOS)- based metabolism, while glycolysis and lactate production are reduced.23 These data imply that NPCs exhibit a metabolic state that depends on mitochondrial functionality.

In our recent work, we demonstrated that during generation of patient-derived iPSCs and subsequent neural induction to NPCs, the mitochondrial genome is entirely retained.23 At the same time, no additional mtDNA modifications were observed. This aspect is crucial as it can allow us to assume that every kind of phenotype observed in the culture is only due to the patient-specific mutations and not to reprogramming-induced artefacts.

In fact, given that NPCs show increased OXPHOS metabolism, it was possible that the consequent increase in reactive oxygen species (ROS) production may damage the mitochondrial genome.27 However, this was not the case. This is very important, as the failure to maintain mtDNA integrity can lead to impaired neuronal maturation.28 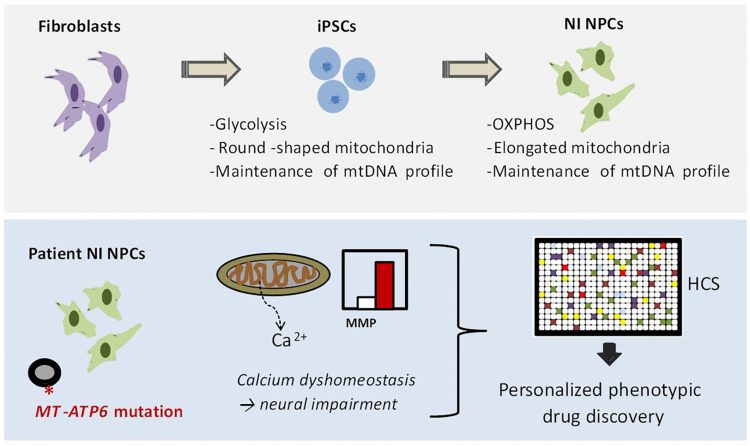 FIGURE 2: NPC-based drug discovery for mitochondrial disorders. In our recent manuscript,23 we first demonstrated that iPSC-derived NPCs exhibit a metabolism dependent on mitochondrial oxidative phosphorylation (OXPHOS) and retain the mtDNA profile of the patient somatic cells. We next generated iPSC-derived NPCs generated from patients carrying the mutation m.9185T>C in the mitochondrial gene MT-ATP6. We identified increased mitochondrial membrane potential (MMP) and calcium defects in patient NPCs as potential causes for neural impairment. Finally, we employed these phenotypes to develop a high-content screening (HCS) method for screening FDA-approved drugs directly on patient NPCs.

In our recent work, we demonstrated that iPSC-derived NPCs exhibit the correct functional, metabolic, and genetic features to be used for drug discovery of mitochondrial diseases (Figure 2).

Having identified these patient-specific cellular phenotypes, we employed patient NPCs to carry out a small-scale high-content screening (HCS) using FDA-approved drugs. The screening aimed to identify compounds capable of ameliorating the abnormally increased MMP of patient NPCs. We discovered that one compound was able to do that: the phosphodiesterase type 5 (PDE5) inhibitor avanafil. By applying avanafil overnight on patient NPCs and patient neurons, we were then able to partially rescue the mitochondrial calcium defects. PDE5 inhibitors are FDA-approved drugs and are already employed safely in some paediatric conditions (for example, pulmonary hypertension). Hence, their repositioning in the context of Leigh syndrome may potentially allow the quick translation of our findings into medical applications.

Taken together, NPCs allow phenotypic drug discovery for mitochondrial disorders affecting the nervous system. This promising iPSC-based strategy provides a useful in vitro platform for a better understanding of mechanisms in mitochondrial disorders, and for the identification of therapeutic approaches for these hitherto incurable human diseases.

We declare no competing financial or commercial interests and acknowledge financial support from the Bundesministerium für Bildung und Forschung (BMBF) (e:Bio Young Investigator grant AZ. 031A318) and the Berlin Institute of Health (BIH).

CARMEN LORENZ is a PhD student in her fourth year in the team of Dr Prigione at the MDC in Berlin. Her project deals with the development of iPSC-based strategies for studying maternally inherited Leigh syndrome. The project is supported by a PhD Translational Fellowship from the Berlin Institute of Health (BIH).

GIZEM INAK is currently doing her PhD in Dr Prigione’s Lab at the (MDC) in Berlin. She completed her Master’s degree in Cellular and Molecular Neuroscience in Tuebingen. Her PhD project is focusing on functional and bioenergetic defects in iPSC-derived dopaminergic neurons from patients with Leigh Syndrome. 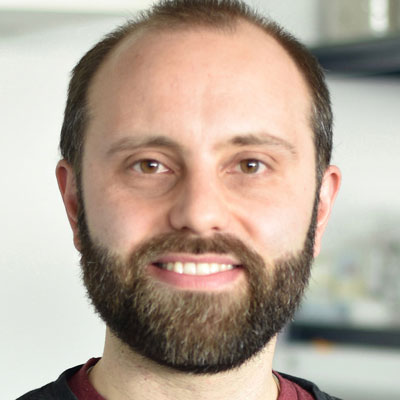