Rheumatoid arthritis (RA) is joint-related, immune-based inflammatory disarray that affects almost 1% of the world’s population. The most evidenced pathogenesis is T-cell activation, which leads to clusters of differentiation (CD) in the T-cells and concurrently increases various inflammatory biomarkers. 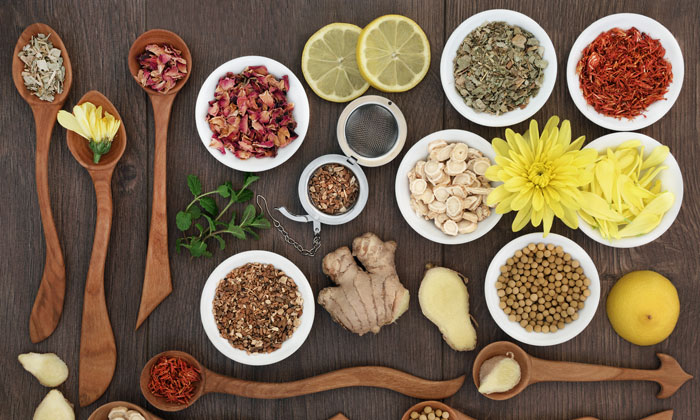 These include nitric oxide, cytokines, chemokines, adhesion molecules, NF-kβ, lipoxygenase, matrix metalloproteinase (MMP) and arachidonic acid. Ultimately, these all destroy cartilage and bone by remodelling and degradation. Based on this, incorporation of bioactives such as polyphenols, thymoquinone, resveratrol, curcumin, celastrol, hesperidin and gambogic acid show high efficacy against RA in a dosedependent manner via targeted action on inflammatory biomarkers. This article explores the potential of herbals in RA therapy and their targeting action on biomarkers.

Rheumatoid arthritis is associated with synovial tissue polyarticular inflammation, which leads to damage of the bones and articular cartilage.1 Causative factors associated with the progression of RA are environmental and genetic, and can change the shape of immunological phenomenon.2 RA may be due to an abnormal immune response that finally leads to joint destruction and synovial inflammation, but its complete aetiology is still not clear.3 However, T-cell activation leads to CD and simultaneously enhances the secretion of cytokines such as TNF-a, IL-1, IL-3, IL-6, inhibitory factors, and macrophage migration.4 These inflammatory mediators elicit functions of synovial tissue, including expression of metalloproteinase, proliferation and secretion of other prostaglandins, chemokines, and adhesion molecules.3,4

Adhesion molecule expression leads to T-cells excessively binding to synovial-type B-cells, which finally produces large amounts of MMP.5 Other factors, like cyclooxygenase, neutral proteases and nitric oxide synthase, trigger neo-angiogenesis.6 The group of auto-antibodies including IgG, IgM and IgA are well known as rheumatic factors (RF) and are responsible for aggravating RA.5 T hey play a role in fixing complements, neutrophils, screen macrophages, cytokines and lymphocytes, by ligating the macrophages’ Fc-c receptors, which leads to inflammation in RA.7,8

Therapeutic treatments such as glucocorticoids (GCs), non-steroidal anti-inflammatory drugs (NSAIDs), biological agents like IL-1 receptor antagonists (IL-1Ra) and TNF-a blockers, and disease-modifying anti-rheumatic drugs (DMARDs), reduce pain and joint inflammation.7 However, there is a need to improve the safety and efficacy of RA treatment with efficacy and adequate safety that has fewer side effects. There are currently challenges in this area, as several cyclooxygenase-2 inhibitors have been withdrawn from the market due to their cardiotoxicity, and DMARDs have side effects that include chronic fungal infections, tuberculosis, liver injury, lymphomas and myelo-suppression with long-term use.10

Biologic agents act by inhibiting IL-6, IL-1ß and TNF-a immune mediators. Despite their availability and the high cost of injectables, patients are often unable to continue biological therapy or they discontinue their medication after short-term use.10

Conventional medications have limited efficacy and high toxicity, according to the American College of Rheumatology. Furthermore, people are dissatisfied with available therapies and 60-90% are dependent on complementary and alternative medicine.11 Herbals have tremendous potential, with wide structural diversity not commonly seen with synthetic drug molecules. The anti-RA action of various phytoconstituents, such as terpenoids, flavonoids, fatty acids and steroids, has been explored.12 These all target the actions of various inflammatory mediators such as nitric oxide (NO), cytokines, chemokines, adhesion molecules, NF-kβ, lipoxygenase (LOX) and arachidonic acid (AA). Details on phytoconstituents have been discussed, as below.12 Pomegranate extracts (PE) are obtained from fruits of Punica granatum, which contain polyphenols, ellagitannins, quercetin, gallic and ellagic acid, and oral administration prevents cartilage destruction in arthritic rat models.13 It also slows down regulation activity against JNK-MAPK and NF-kβ activity, which are the major sites for targeting drugs in arthritis.13

Thymoquinone (TQ) is a bioflavonoid isolated from Nigella sativa seeds. It is extensively used as an alternative medicine in Far- and Middle-Eastern countries to treat several diseases. Various literature surveys on TQ indicate its benefits in inflammatory diseases such as osteoarthritis, RA and inflammatory bowel disease.14 Tekeoglu and colleagues explored TQ administration by injection into the intraperitoneal cavity in adjuvant induced arthritis (AIA) in rats, and found that it exhibits the same therapeutic value as MTX.15 Another study revealed that TQ oral administration at 5mg/kg/ day leads to inhibition of the serum TNF-a and IL-1β levels in RA.16

Resveratrol is a natural polyphenolic compound widely present in the epidermis of grapes (Vitis vinifera). Various literature reports have explored the medicinal uses of resveratrol.17 Along with grape epidermis, Polygonum cuspidatum roots, which are rich in resveratrol, are used as a folk medicine in Japan and China. Resveratrol intra-articular injection is effective against RA by retarding the level of ROS, IL-1, PGE2, tumour protein (p53) induced apoptosis, MPPs and LTB-4 in animal models.18 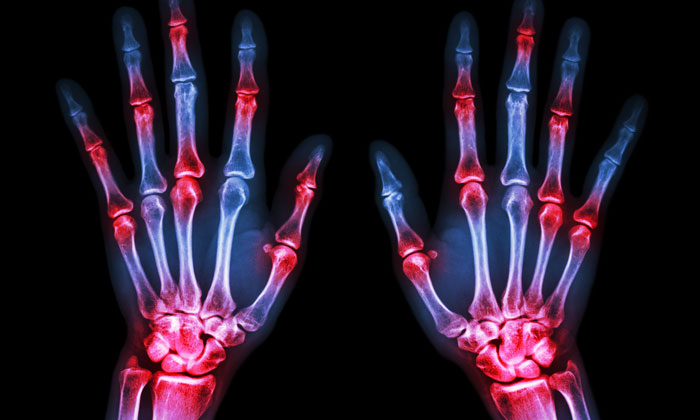 Hesperidin is a citrus flavonoid known for its pharmacological potential, and its therapeutic significance has been extensively investigated in models of rat arthritis. Hesperidin’s intragastric dosage of 80 and 160mg per kg successfully reduced secondary paw-swelling, and decreased the production of TNF-a, IL-6 and IL-1 in RA.19 Another study showed that hesperidin’s effect on the model of rat adjuvant arthritis involves well-marked proliferation suppression of synoviocytes.19 Curcumin is a tetraterpenoid isolated from rhizomes of Curcuma longa. It demonstrates a wide range of pharmacological activities, such as anticancer, antioxidant and anti-inflammatory effects.20 Due to low bioavailability it is not clinically established for oral administration. Currently, curcumin is studied for its beneficial effects in RA, where its intra-peritoneal dosing of 23mg total curcuminoids per kg, per day, suppresses the catabolic and inflammatory mediators such as stimulated nitric oxide, MMP-9, IL-b, COX-2, PGE2, MMP-3, and IL-8. Furthermore, it also inhibits mediators like JAK/STAT pathways, NF-kb and JNK in human chondrocytes.21

Extracts of green tea orally administered at 200mg per kg show anti-arthritic potential, owing to the presence of non-toxic epigallocatechin-3-gallate (EGCG). It also retards the release of IL-1-induced glycolaminoglycan by blocking the activity of NF-kB in chondrocytes. Furthermore, it inhibits nitric oxide synthase (iNOS) stimulated by IL-1, JNK action and nitric oxide, which induce destruction of cartilage.22,23 RA synovial fibroblasts containing TNF-a-induced ERK (extracellular signal-regulated kinase), MMP-3, MMP-1, JNK, p38 and AP-1, are also successfully inhibited by EGCG. It inhibits expression of oncostatin M-stimulated CCL2 chemokine in human osteoblasts and decreases the severity of arthritis induced by collagen (CIA). Hence, from in-vivo and in-vitro studies, it can be concluded that EGCG reduces cartilage degradation, synovial hyperplasia and bone resorption through different targets in the joints.24

Celastrol is a pentacyclic triterpene isolated from Trypterigium wilfordii and used as a conventional Chinese medicine. It shows anti-inflammatory and anti-tumour activity.25 Intra-peritoneal administration at 1g per gram of body weight every day to AIA rats exhibits an anti-inflammatory potential through the inhibition of NF-kβ activation and down-regulation of caspase 1.25,26 It down-regulates the TNF and IL-1β secretion in a rat model of adjuvant-induced arthritis (AIA), and it recently reached clinical trial phase I.26 Gambogic acid (GA), is a poly-prenylated xanthone resin isolated from Garcinia Morella and Garcinia hanburyi. It is used in South-east Asia as an alternative and complementary medicine.27 GA can be used as a promising anti-arthritic agent, which reduces the secretion of TNF and IL-1β. Intra-peritoneal administration of GA at a dose of 4g per gram body weight each day to AIA rats in the starting and late arthritis phase causes the removal of the inflammatory infiltrate and cell proliferation.27

Sinomenine is an alkaloid isolated from Sinomenium acutum plant. Its intraperitoneal administration exerts an effect in RA by suppressing MMP-9, MMP-2, and IL-6 in the animal model of arthritis.28 The Centella asiatica plant is used as a conventional Chinese medicine and shows significant effects in RA. Triterpenoid compounds isolated from the plant include madecassoside, asiaticoside, asiatic acid and centelloside. A recent study reported that asiaticoside successfully exhibits anti-inflammatory potential by CIA mice. After madecassoside oral administration at 10, 20 and 40mg per kg dose in a CIA mouse, the histopathology revealed that increased inflammatory cells infiltration and synovial hyperplasia helps in providing protection against joint destruction.29

Treatments for RA have several demerits that hinder their efficacy. Based on inflammatory biomarkers, herbal pharmacotherapy has wide structural diversity and great potential against RA treatment, which is not commonly seen with synthetic treatments. Administration of phytomolecules such as polyphenols, thymoquinone, resveratrol, hesperidin, curcumin, celastrol and gambogic acid, in a dose-dependent manner, gives high efficacy against RA. The benefits are attributed to their targeting action against cytokines, chemokines, adhesion molecules, NF-kβ, nitric oxide, etc.

DR SARWAR BEG is a Research Scientist at Jubilant Generics Limited, Noida, India. His major areas of research interest include QbD-driven development and characterisation of diverse drug delivery systems. He is the Regional Editor of Current Nanomedicine, Editorial Board Member of Bioavailability and Bioequivalence Journal and Nanotech Research Letter, and reviewer of several international journals.

DR VIKAS KUMAR is Assistant Professor (Pharmacognosy) at the Department of Pharmaceutical Sciences, Shalom Institute of Health and Allied Sciences, Sam Higginbottom University of Agriculture, Technology & Sciences (SHUATS), Allahabad, India. He has been working on traditional medicine in drug discovery leading to the development of therapeutic leads from natural resources. His research work is highlighted on screening, evaluation, formulation and standardisation of herbal drugs with their validation to ensure quality, efficacy and safety.