Targeting these brain circuits could offer a new way to reverse motor dysfunction and depression in Parkinson’s disease patients. 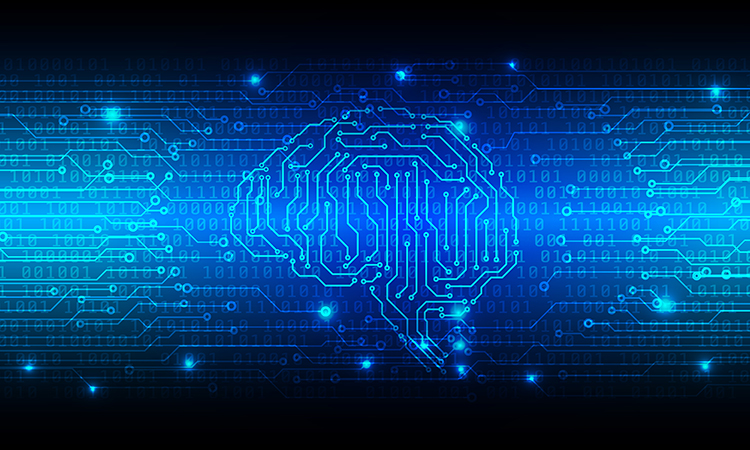 In a study of a small region of the thalamus, neuroscientists from the Massachusetts Institute of Technology (MIT), US, have now identified three distinct circuits that influence the development of both motor and nonmotor symptoms of Parkinson’s disease. Furthermore, they found that by manipulating these circuits, they could reverse Parkinson’s symptoms in mice.

The findings, which were recently published in Nature, suggested that those circuits could be potential targets for new drugs that could help combat many of the symptoms of Parkinson’s disease.

The thalamus consists of several different regions that perform a variety of functions. Many of these, including the parafascicular (PF) thalamus, help to control movement. Degeneration of these structures is often seen in patients with Parkinson’s disease, which is thought to contribute to their motor symptoms.

In this study, the team set out to trace how the PF thalamus is connected to other brain regions to learn more about its functions. They found that neurons of the PF thalamus project to three different parts of the basal ganglia, a cluster of structures involved in motor control and other functions: the caudate putamen (CPu), the subthalamic nucleus (STN), and the nucleus accumbens (NAc).

Further studies revealed those functions. The circuit that projects to the CPu appears to be involved in general locomotion, and functions to dampen movement. When the researchers inhibited this circuit, mice spent more time moving around the cage they were in.

The circuit that extends into the STN, on the other hand, is important for motor learning. The researchers found that this circuit is necessary for a task in which the mice learn to balance on a rod that spins with increasing speed.

Lastly, the researchers found that, unlike the others, the circuit that connects the PF thalamus to the NAc is not involved in motor activity. Instead, it appears to be linked to motivation. Inhibiting this circuit generates depression-like behaviours in healthy mice, and they will no longer seek a reward such as sugar water. 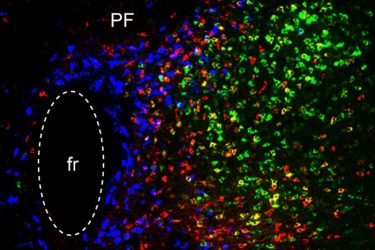 In this image of the parafascicular (PF) thalamus, the blue cells participate in reward processing/depression, the red cells are critical for motor learning, and the green cells are important for general locomotion. The ‘fr’ stands for a fibre bundle
[Credit: Ying Zhang and Dheeraj Roy].

Once the researchers established the functions of these three circuits, they decided to explore how they might be affected in Parkinson’s disease. To do that, they used a mouse model of Parkinson’s, in which dopamine-producing neurons in the midbrain are lost.

They found that in this Parkinson’s model, the connection between the PF thalamus and the CPu was enhanced, and that this led to a decrease in overall movement. Additionally, the connections from the PF thalamus to the STN were weakened, which made it more difficult for the mice to learn the accelerating rod task.

Lastly, the researchers showed that in the Parkinson’s model, connections from the PF thalamus to the NAc were also interrupted, and that this led to depression-like symptoms in the mice, including loss of motivation.

Using chemogenetics or optogenetics, which allows them to control neuronal activity with a drug or light, the researchers found that they could manipulate each of these three circuits and in doing so, reverse each set of Parkinson’s symptoms. Then, they decided to look for molecular targets that might be “druggable,” and found that each of the three PF thalamus regions have cells that express different types of cholinergic receptors, which are activated by the neurotransmitter acetylcholine. By blocking or activating those receptors, depending on the circuit, they were also able to reverse the Parkinson’s symptoms.

The researchers hope that the circuits they characterised in this study could be targets for new Parkinson’s therapies. The types of neurons that they identified in the circuits of the mouse brain are also found in the nonhuman primate brain, and the researchers are now using RNA sequencing to find genes that are expressed specifically in those cells.