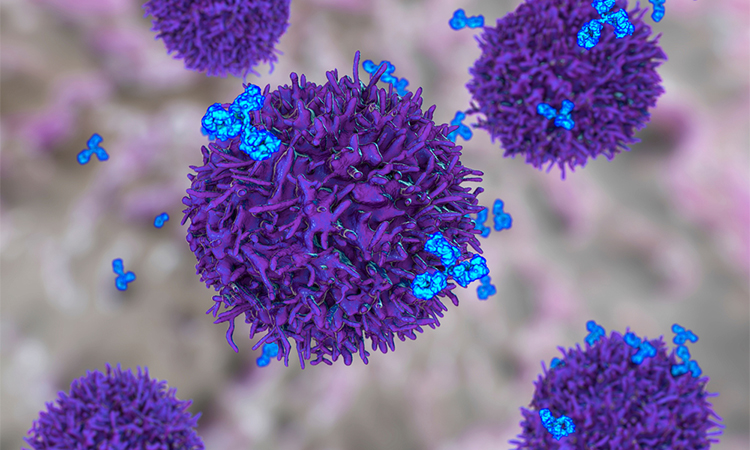 An international team of researchers from the Cluster of Excellence CIBSS of the University of Freiburg, Germany, and Harvard Medical School, US, has now published the exact molecular structure of an IgM-type B-cell receptor. Their findings indicate that the receptor on the surface of the B cell interacts with further receptors, thus controlling its signal transduction. The study was recently published in Nature.

“For a long time, we did not have the technical possibilities to study the exact structure of membrane proteins. Now, cryo-electron microscopy (cryo-EM) has enabled us to create a high-resolution image of the B-cell receptor,” said Dr Michael Reth.

With cryo-EM, the sample to be studied is cooled very rapidly to minus 183 °C. This reduces the natural movement of the molecules and prevents the formation of tiny ice crystals that otherwise would destroy the protein structure. In this way, it is possible to achieve resolutions that are many times higher than with other electron microscopic methods. In their current study, the researchers achieved a resolution of 3.3 angstroms, which corresponds to the width of just a few atoms. To do so, they combined hundreds of thousands of images of the entire receptor with those of a truncated version that lacked two flexible regions. They then used these data to calculate the complete three-dimensional structure of the B-cell receptor on the computer.

The researchers say the striking thing about the 3D structure is that the symmetrical membrane-bound antibody only binds to Ig alpha and Ig beta on one side, thus forming an asymmetrical complex, resembling a T-cell receptor.

“It is astounding that both types of antigen receptor form asymmetrical complexes,” explained Reth. “This leads us to conclude that the structure now elucidated is part of a larger receptor complex and that it interacts with still other molecules on the B-cell surface.” 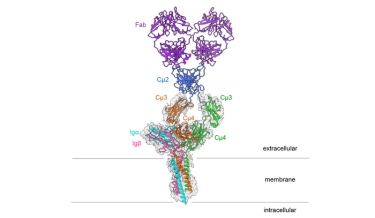 Such larger structures, which are held together through less powerful forces, cannot yet be studied with techniques like cryo-EM. However, the newly published molecular structure provides further evidence in favour of such an interaction with other molecules: It shows that the outside of the B-cell receptor contains conserved amino acids. Amino acids are described as conserved if they hardly change during evolution and are therefore identical in the antigen receptors of different organisms.

“The presence of conserved amino acids that are directed outward suggests that the IgM B-cell receptor has further binding partners,” said Reth. “In other words, we only know part of the machine so far – and now we want to identify the other building blocks and determine how they influence the signalling effect of the receptor.”

These other building blocks could explain how the receptor is normally kept quiescent and is activated only when it binds to an antigen.

“That will be one of the next important tasks in the study of adaptive immunity,” concluded Reth. “A better understanding of B-cell activation could also help us to further improve the development of vaccines or to understand the formation of lymphoma in which the B-cell receptor is activated in an uncontrolled manner.”

Cluster of Excellence CIBSS of the University of Freiburg, Harvard Medical School