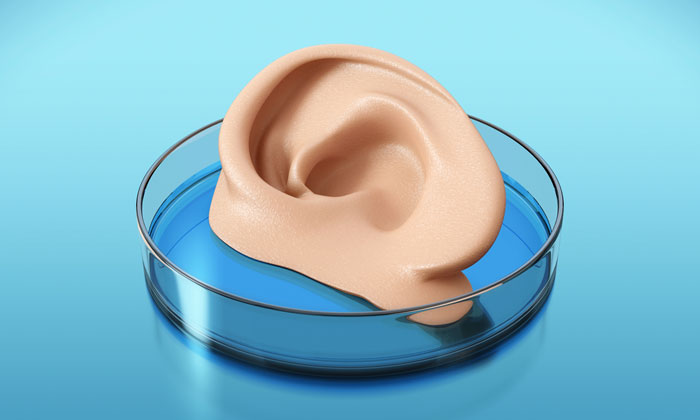 The fact that the stem cells survived being printed in this manner is a success in itself. In addition, the research team was able to influence the cells to multiply and differentiate to form chondrocytes (cartilage cells) in the printed structure.

The research project is being conducted in collaboration with a team of researchers at the Chalmers University of Technology who are experts in the 3D printing of biological materials. Orthopaedic researchers from Kungsbacka are also involved in the research collaboration.

The team used cartilage cells harvested from patients who underwent knee surgery, and these cells were then manipulated in a laboratory, causing them to rejuvenate and revert into pluripotent stem cells.

The stem cells were then expanded and encapsulated in a composition of nanofibrillated cellulose and printed into a structure using a 3D bioprinter. Following printing, the stem cells were treated with growth factors that caused them to differentiate correctly, so that they formed cartilage tissue.

Tricked into thinking that they aren’t alone

“In nature, the differentiation of stem cells into cartilage is a simple process, but it’s much more complicated to accomplish in a test tube. We’re the first to succeed with it, and we did so without any animal testing whatsoever,”

Most of the team’s efforts had to do with finding a procedure so that the cells survive printing, multiply and a protocol that works that causes the cells to differentiate to form cartilage.

“We investigated various methods and combined different growth factors. Each individual stem cell is encased in nanocellulose, which allows it to survive the process of being printed into a 3D structure. We also harvested mediums from other cells that contain the signals that stem cells use to communicate with each other so called conditioned medium.

In layman’s terms, our theory is that we managed to trick the cells into thinking that they aren’t alone,” clarifies Stina Simonsson.

Therefore the cells multiplied before we differentiated them.

A key insight gained from the team’s study is that it is necessary to use large amounts of live stem cells to form tissue in this manner.

The cartilage formed by the stem cells in the 3D bioprinted structure is extremely similar to human cartilage. Experienced surgeons who examined the artificial cartilage saw no difference when they compared the bioprinted tissue to real cartilage, and have stated that the material has properties similar to their patients’ natural cartilage. Just like normal cartilage, the lab-grown material contains Type II collagen, and under the microscope the cells appear to be perfectly formed, with structures similar to those observed in samples of human-harvested cartilage.

Potential for use in osteoarthritis therapies

The study represents a giant step forward in the ability to generate new, endogenous cartilage tissue. In the not too distant future, it should be possible to use 3D bioprinting to generate cartilage based on a patient’s own, “backed-up” stem cells. This bioprinted tissue can be used to repair cartilage damage, or to treat osteoarthritis, in which joint cartilage degenerates and breaks down. The condition is very common – one in four Swedes over the age of 45 suffer from some degree of osteoarthritis.

In theory, this research has created the opportunity to generate large amounts of cartilage, but one major issue must be resolved before the findings can be used in practice to benefit patients.

“The structure of the cellulose we used might not be optimal for use in the human body.

“Before we begin to explore the possibility of incorporating the use of 3D bioprinted cartilage into the surgical treatment of patients, we need to find another material that can be broken down and absorbed by the body so that only the endogenous cartilage remains, the most important thing for use in a clinical setting is safety”