MRC-funded researchers have identified properties in DNA’s protective structure that could transform the way scientists think about the human genome. 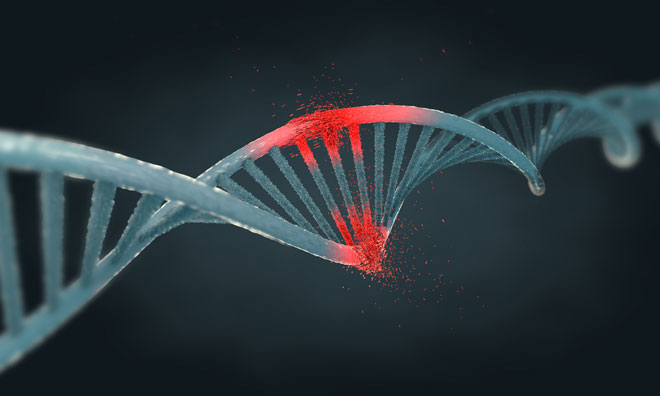 MRC-funded researchers have identified properties in DNA’s protective structure that could transform the way scientists think about the human genome.

Molecules involved in DNA’s supportive scaffolding – once thought to be fixed – go through dynamic and responsive changes to shield against mutations, the research shows.

The scientists say this finding is crucial to understanding DNA damage and genome organisation and could impact current thinking on DNA-linked diseases, including cancers.

In human cells, DNA is wrapped around proteins to form chromatin. Chromatin shields DNA from damage and regulates what genetic information can be read – a process known as transcription.

The study showed that a chemical – scaffold attachment factor A (SAF-A) – binds to specific molecules, known as caRNAs, to form a protective chromatin mesh.

For the first time, this mesh was shown to be dynamic, assembling and disassembling to allow the structure to be flexible and responsive to cell signals.

In addition, loss of SAF-A was found to lead to abnormal folding of DNA and to promote damage to the genome.

The scientists say the findings shed light on how chromatin protects DNA from high numbers of harmful mutations, a condition known as genetic instability.

SAF-A has previously been shown in mouse studies to be essential to embryo development and mutations of the SAF-A gene have repeatedly been found in cancer gene screening studies.

Professor Nick Gilbert, from the MRC Institute of Genetics and Molecular Medicine at the University of Edinburgh, who led the study said:

“These findings are very exciting and have fundamental implications for how we understand our own DNA, showing that chromatin is the true guardian of the genome. The results open new possibilities for investigating how we might protect against DNA mutations that we see in diseases like cancer.”

“This research uncovers how the genes in our cells are opened up and packed away, according to whether they’re needed. The study shows that gene expression determines when a responsive mesh of SAF-A protein and RNA packs and unpacks regions of DNA. Researchers can now use these findings to explore whether mistakes in this very dynamic mesh can cause diseases such as cancer. This is a great example of why the MRC supports basic science research: by changing how we think about our DNA, it suggests new ways to understand a range of diseases.”