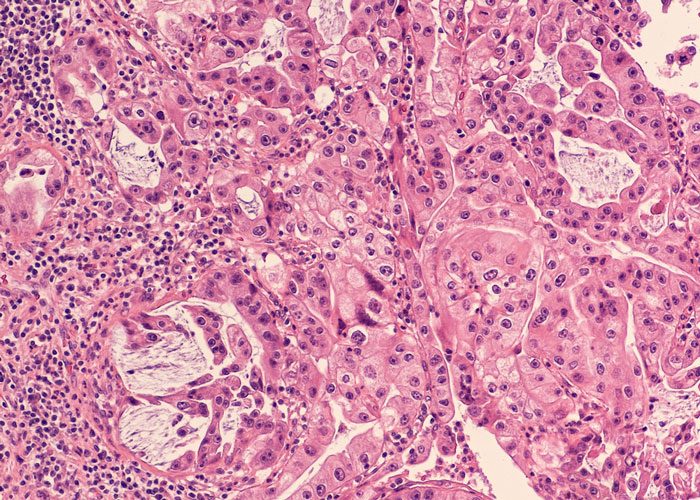 Researchers offer a promising target for future therapies that could potentially root out even well-hidden metastatic cancer lesions. When they deleted the gene encoding this protein in mice with the disease, the animals lived longer, and cancer’s spread to other organs was reduced.

“We thought that by targeting this protein we would see a big change in the primary tumor, and, while we do see a delay, the big change was in the metastasis,” said Ellen Puré, the study’s senior author and chair of the Department of Biomedical Science in Penn’s School of Veterinary Medicine. “It looks like this protein might be a druggable target, so we’re hoping that with some additional follow-up work, it’s something that we’ll see go into patients.”

To gain a clearer understanding of cancer biology and expand the range of potential therapeutics, researchers such as Dr Puré and her colleagues have increasingly expanded their research focus, from examining the tumour cells in isolation to a fuller picture of how tumours interact with their surrounding tissues.

This investigation of the so-called “tumour microenvironment” has revealed that seemingly “normal” tissues that envelop a tumour, known as the stroma, can impede, allow or even encourage tumour growth, depending on a host of factors.

The stroma is sometimes referred to as the “soil” in which cancers grow; the right conditions will either allow a tumour to grow or keep it from rooting.

“If you take a tumour cell and put it on normal stroma,” said Dr Puré, “it will typically inhibit tumour growth. You need to have a permissive stroma to let a neoplastic cell grow out of control and eventually metastasize.”

Many elements contribute to whether a stroma is tumour-permissive or not, but one that has been shown to be important is the tissue’s density and stiffness. Stroma can hold in tumour cells and prevent them from growing on the one hand, but, on the other, reorganised, tightly packed or dense stroma can promote tumour growth and make it difficult for immune cells or drugs to reach a tumour itself.

In earlier studies of the role of the tumour microenvironment, Dr Puré and colleagues discovered a protein that plays a role in shaping the physical nature of the stroma, a protein-cleaving enzyme called FAP, for fibroblast activation protein. In a 2016 publication, the researchers demonstrated that this enzyme digests collagen, a primary component of the stromal extracellular matrix, by snipping intermediate-sized pieces of collagen into degradable fragments.

This FAP-dependent turnover of stroma enhances tumour growth. When the team deleted or inhibited FAP in mouse models of lung and colon cancer, it led to an accumulation of matrix material and inhibited tumour growth because the undigested collagen restrained a tumour and prevented it from receiving an adequate blood supply.

“Collagen is something we have to understand a lot more about in the context of the tumour microenvironment,” said Dr Puré. “A lot of people think it’s just the amount of collagen present, but we’re showing that it’s more complicated; the architecture and structure play a critical role.”

In the current work, the researchers looked to pancreatic cancer, a tumour type that is dominated by connective tissue, to see whether modulating FAP could make a dent in the primary tumour growth and, importantly, whether it played a role in making other organ’s tissue more susceptible to metastatic lesions.

By targeting FAP with a drug, we may be able to slow down the spread of cancer

First, the researchers looked to tissues samples from human patients and found that FAP levels correlated with prognosis. Those patients with high levels of FAP expression in their stromal cells had shorter survival times compared with patients with lower FAP levels.

In a mouse model of pancreatic cancer, abolishing FAP expression delayed the onset of disease by five weeks and prolonged the animals’ overall survival by 36 days.

Drilling down into how FAP-affected the disease course, the researchers found that FAP-depleted tumours had more signs of necrosis, a form of cell death, and greater infiltration of white blood cells, suggesting that FAP may normally act to prevent the immune system from controlling tumours.

Perhaps the more significant effect of FAP, however, was to reduce cancer’s spread from the pancreas to other organs.

“This is the first time we’ve shown that FAP is important for promoting metastasis,” Puré said. “By targeting FAP with a drug, we may be able to slow down the spread of cancer by treating distal tissues that you don’t even realise are getting ready to accept tumour cells, a phenomenon referred to as treating premetastatic niches. That is the hope.”

In future work, Puré’s group will be narrowing down what aspect of FAP is responsible for promoting disease progression. Inhibitors of its protein-cleaving activity already exist, so, if that is found to be responsible for its role in driving cancer, the path to a human therapy may be alluringly in reach.

The research has been published in the Journal of Clinical Investigation Insight.