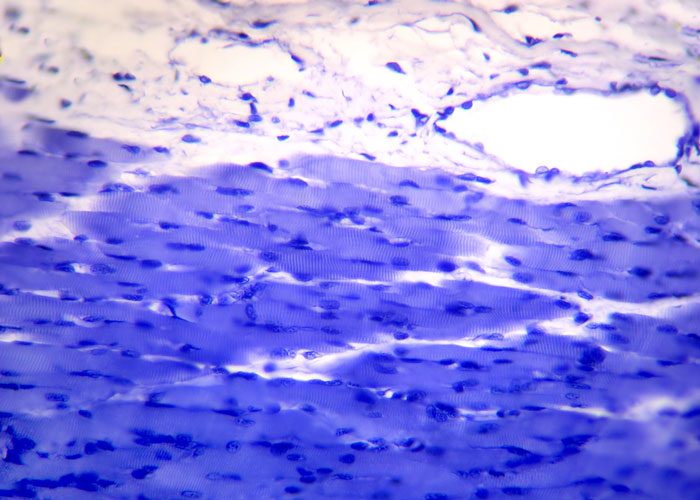 In the new study, the researchers started with human induced pluripotent stem cells. These are cells taken from adult non-muscle tissues, such as skin or blood, and reprogrammed to revert to a primordial state. The pluripotent stem cells are then grown while being flooded with a molecule called Pax7 — which signals the cells to start becoming muscle.

As the cells proliferated they became very similar to –but not quite as robust as — adult muscle stem cells. While previous studies had accomplished this feat, nobody has been able to then grow these intermediate cells into functioning skeletal muscle.

Once the cells were well on their way to becoming muscle, Nenad Bursac, Professor of Biomedical Engineering at Duke University and Dr Lingjun Rao, a postdoctoral researcher in the Bursac’s laboratory stopped providing the Pax7 signalling molecule and started giving the cells the support and nourishment they needed to fully mature.

In the study, the researchers show that after two to four weeks of 3-D culture, the resulting muscle cells form muscle fibres that contract and react to external stimuli such as electrical pulses and biochemical signals mimicking neuronal inputs just like native muscle tissue. They also implanted the newly grown muscle fibres into adult mice and showed that they survive and function for at least three weeks while progressively integrating into the native tissue through vascularisation.

The resulting muscle, however, is not as strong as native muscle tissue, and also falls short of the muscle grown in the previous study that started from muscle biopsies. Despite this caveat, the researchers say this muscle still holds potential that the stronger, older relative does not.

The pluripotent stem cell-derived muscle fibres develop reservoirs of “satellite-like cells” that are necessary for normal adult muscles to repair damage, while the muscle from the previous study had much fewer of these cells. The stem cell method is also capable of growing many more cells from a smaller starting batch than the biopsy method.

Both of the advantages point toward a possibility of using this new method for regenerative therapies and for creating models of rare diseases for future studies and individualised health care.

The Duke researchers succeeded where previous attempts had failed.

“Starting with pluripotent stem cells that are not muscle cells, but can become all existing cells in our body, allows us to grow an unlimited number of myogenic progenitor cells,” said Prof Bursac, Professor of Biomedical Engineering at Duke University. “These progenitor cells resemble adult muscle stem cells called ‘satellite cells’ that can theoretically grow an entire muscle starting from a single cell.”

In their previous work, Prof Bursac and his team started with small samples of human cells obtained from muscle biopsies, called “myoblasts,” that had already progressed beyond the stem cell stage but hadn’t yet become mature muscle fibres. They grew these myoblasts by many folds and then put them into a supportive 3-D scaffolding filled with a nourishing gel that allowed them to form aligned and functioning human muscle fibres.

“It’s taken years of trial and error, making educated guesses and taking baby steps to finally produce functioning human muscle from pluripotent stem cells,” said Dr Rao. “What made the difference are our unique cell culture conditions and 3-D matrix, which allowed cells to grow and develop much faster and longer than the 2-D culture approaches that are more typically used.”

“The prospect of studying rare diseases is especially exciting for us,” said Prof Bursac. “When a child’s muscles are already withering away from something like Duchenne muscular dystrophy, it would not be ethical to take muscle samples from them and do further damage. But with this technique, we can just take a small sample of non-muscle tissue, like skin or blood, revert the obtained cells to a pluripotent state, and eventually grow an endless amount of functioning muscle fibres to test.”

The technique also holds promise for being combined with genetic therapies. Researchers could, in theory, fix genetic malfunctions in the induced pluripotent stem cells derived from a patient and then grow small patches of completely healthy muscle. While this could not heal or replace an entire body’s worth of diseased muscle, it could be used in tandem with more widely targeted genetic therapies or to heal more localised problems.

The researchers are now refining their technique to grow more robust muscles and beginning work to develop new models of rare muscle diseases.