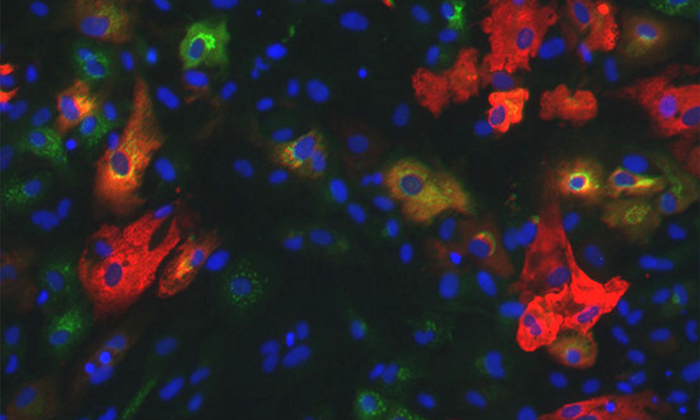 Enhanced reprogramming of skin cells (blue) to liver-like cells (red and green) by reducing expression of a repressive protein. Credit: The laboratory of Ken Zaret, PhD, Perelman School of Medicine, University of Pennsylvania

This could be used in regenerative medicine studies and one day in the clinic, according to a study in Molecular Cell by investigators from the Perelman School of Medicine at the University of Pennsylvania.

“In the past, most labs, including my own, used gene activators to turn on a new program to change the identity in a given cell,” said senior author Ken Zaret, PhD, director of the Penn Institute for Regenerative Medicine and a professor of Cell and Developmental Biology.

“Our study shows that in some cases we will need to disassemble a cell’s gene repression machinery to activate important genes to reprogram a cell’s identity.”

The team attempted to reprogram skin cells to make new liver cells. Conversions of one cell type to another usually have low efficiencies, and this study identifies one reason why. The long term goal of this preclinical research is to be able to replenish diseased liver tissue with healthy tissue derived from a different tissue, such as skin cells, from the same individual in a process called direct-cell reprogramming.

The Zaret lab untangled an extreme form of gene silencing, opening up regions of tightly wound DNA that is difficult for activators to reach to turn on certain genes. They found the regions by characterising an increase in chemical cross-linking due to DNA being more compacted in the scaffolding of repressed regions of chromosomes.

“Think of a piece of fishing line that has been used for a while, with several knots along its length,” Zaret said. “The knotted areas are more easily cross-linked regions, reflecting them being super-silenced areas of DNA.”

For the body to maintain its 200-plus different cell types, cells must activate genes specific to their type while simultaneously repressing genes of alternative types. Most genes in silenced DNA regions (not available to be ‘read’ and made into a protein) are typically functions not used by the current cell type. Zaret likens it to insurance so cells don’t mix up their identity, which could induce problems such as uncontrolled, cancerous cell replications, or so that brain or liver genes are kept from being expressed in skin cells, for example.

The team characterised the proteins that help make the regions ‘knotted’ and found they were more complex than expected. “We found more types of different proteins than we thought we would,” Zaret said. To do this, they turned on the activity of once-silenced genes in human skin cells grown in culture to see if the knotted domain would open more easily when each was eliminated. Of the 50 proteins tested, some are also mutated in such neurodegenerative disorders as Lou Gehrig’s disease.

“While most reprogramming genes are not in these super silent regions of DNA, very important genes are; so this gives us a new way to think about reprogramming,” Zaret said. The ultimate goal of their study is to find more efficient ways to reprogram one cell type into another by awakening silenced genes plus adding activators.