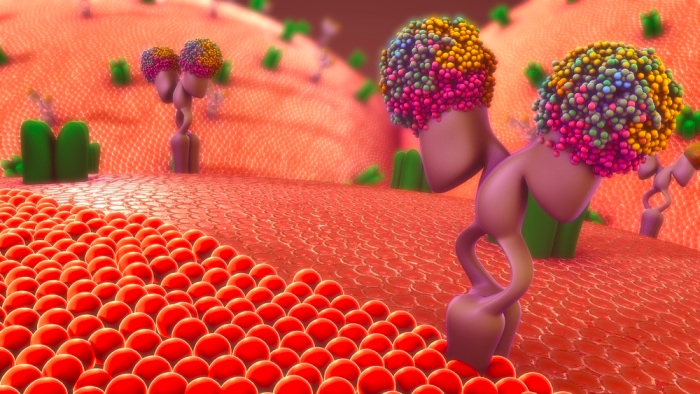 “Our results pave the way for the design of multispan membrane proteins that could mimic proteins found in nature or have entirely novel structure, function and uses,” said David Baker, a University of Washington School of Medicine Professor Biochemistry and director of the UW Institute of Protein Design who led the project.

But understanding how transmembrane proteins are put together and how they work has proved challenging. Because they act while embedded within the cellular membrane, transmembrane proteins have proven to be more difficult to study than proteins that operate in the watery solution that make up the cells’ cytoplasm or in the extracellular fluid. 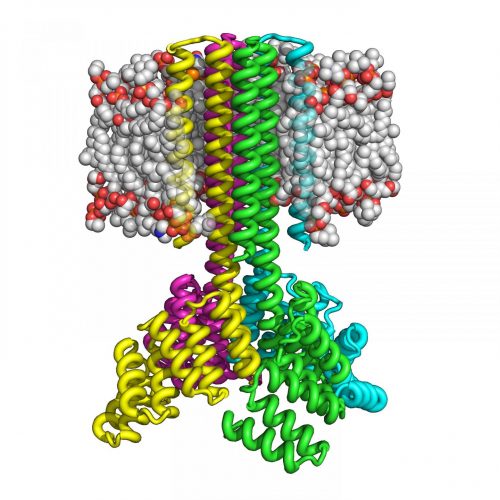 This illustration shows how four copies of computer-designed transmembrane protein assembled to form a rocket-shaped tetramer with a wide cytoplasmic base that funnels into eight transmembrane helices and which orients correctly in a membrane. University of Washington Institute for Protein Design.

The Rosetta program used by Dr Lu and his colleagues can predict the structure of a protein by taking into account these interactions and calculating the lowest overall energy state. It is not unusual for the program to create tens of thousands of model structures for an amino acid sequence and then identify the ones with lowest energy state. The resulting models have been shown to accurately represent the structure the sequence will likely assume in nature.

In aqueous fluids, amino acid residues that have polar sidechains – components that can have a charge under certain physiological conditions or that participate in hydrogen bonding — tend to be located on the surface of the protein where they can interact with water, which has negatively and positively side charges to its molecule. As a result, polar residues on proteins are called hydrophilic, or “water-loving.”

Non-polar residues, on the other hand, tend to be found packed within the protein core away from the polar aqueous fluid. Such residues are called hydrophobic or “water-fearing.” As a result, the interaction between the water-loving and water-fearing residues of the protein and the surrounding watery fluids helps drive protein folding and stabilizes the protein’s final structure.

In membranes, however, protein folding is more complicated because the lipid interior of the membrane is non-polar, that is, it has no separation of electrical charges. This means to be stable the protein must place nonpolar, water-fearing residues on its surface, and pack its polar, water-loving residues inside. Then it must find a way to stabilize its structure by creating bonds between the hydrophilic residues within its core.

The key to solving the problem, says Dr Lu, was to apply a method developed by Baker lab to design proteins so that the polar, hydrophilic residues fit in such a way that enough would form polar-polar interactions that can tie the protein together from within.

With this approach, Dr Lu and his colleagues were able to manufacture the designed transmembrane proteins inside bacteria and mammalian cells by using as many as 215 amino acids. The resulting proteins proved to be highly thermally stable and able to correctly orient themselves on the membrane. Like naturally occurring transmembrane proteins, the proteins are multipass, meaning they traverse the membrane several times, and assemble into stable multi-protein complexes, such as dimers, trimers and tetramers.

The research is reported in the journal Science.