Research shows that preventing or reversing ‘T-cell exhaustion’ with targeted therapies could enhance the effects of immunotherapy. 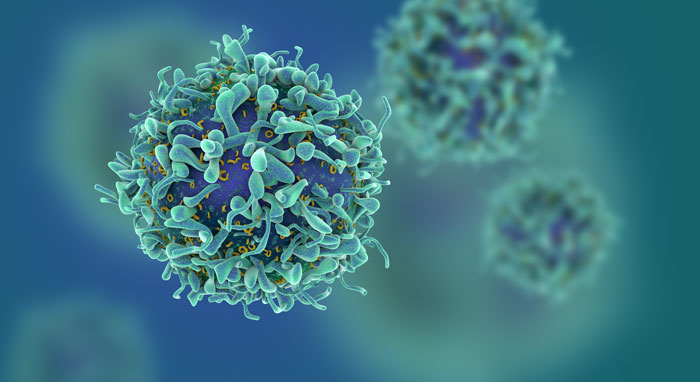 Cancer immunotherapies that improve the ability of T-cells – highly specialised immune soldiers – to attack cancer have made major strides in the clinic. However, they work only for 10 to 30 per cent of cancer patients. One reason for this is a phenomenon called ‘T-cell exhaustion’, where the T-cells that are most specialised to kill cancer are continually stimulated, becoming drained of their energy due to the harsh conditions inside the tumour. New research from the University of Pittsburgh School of Medicine and the UPMC Hillman Cancer Center shows that preventing or reversing this metabolic exhaustion with targeted therapies could enhance the effects of immunotherapy, potentially allowing them to help more patients.

The research, published in the Journal of Experimental Medicine, reveals this insight by uncovering how a protein on the surface of T-cells, called 41BB, works. 41BB is part of a family of ‘co-stimulators’ normally activated when T-cells are fighting infections, but the conditions inside a tumour prevent this from occurring. Previous research has shown that activating 41BB helps T-cells replicate and persist long-term, but how it does that has remained a mystery.

“What we found is that 41BB’s effect can be almost completely chalked up to how it alters T-cell metabolism. In a sense, activating 41BB keeps the T-cells well fed so they last longer in a fight,” said Greg M. Delgoffe, Ph.D., assistant professor of immunology at Pitt’s School of Medicine and an investigator at the UPMC Immune Transplant and Therapy Center.

In lab-grown mouse T-cells, the researchers found that a protein antibody that activated 41BB caused its mitochondria to both grow in number and fuse with each other.

“Activating 41BB increased the energy reserves of T-cells so they were ready to swiftly unleash their killing ability on demand,” said Ashley Menk, a researcher in Delgoffe’s lab and the first author of the study.

However, drugs that activate 41BB have not had much success on their own in clinical trials. To overcome this, the researchers tested whether 41BB activation, while not effective on its own, could improve the effect of two immunotherapy approaches: a checkpoint inhibitor drug that blocks the PD1 protein on T-cells and a cellular therapy that uses engineered T cells to recognise tumour cells.

When tested in a mouse model of melanoma that normally responds poorly to PD1 immunotherapy or therapeutic T cells on their own, the combination resulted in much better outcomes.

“While activating 41BB fixes the fuel issue, it doesn’t appear to fix the immunological issue, which is what checkpoint inhibitors or cellular therapies are great at. The combination of the two, we found, was better than the sum of its parts,” said Delgoffe.

Intriguingly, the team also found that pre-treating mice with a short duration of 41BB activation followed by PD1 immunotherapy was as good as using both drugs throughout, an approach that could potentially avoid side effects associated with long-term 41BB activation.

The researchers are testing the combination treatment in human tumour models and expect to conduct clinical trials in the near future.