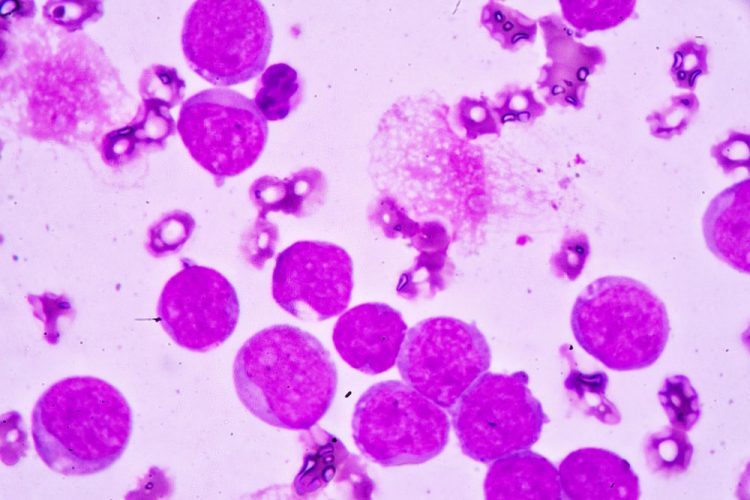 Researchers in New York have discovered that a signalling protein elevated in patients with acute myeloid leukaemia (AML) plays a much wider role in the disease than previously thought. The study raises hopes that current efforts to target this signalling protein could be a successful strategy to treat AML and other blood cancers.

One possible target is a protein called interleukin-1 receptor accessory protein (IL1RAP), which is often highly expressed on the surface of leukaemia stem cells but largely absent from normal blood stem cells. But whether leukaemic stem cells require IL1RAP to survive and proliferate–and therefore whether inhibiting IL1RAP could be a successful way to treat AML–is unclear.

In the femur of a control mouse (left), AML cells (white arrowhead) have displaced most of the normal bone marrow cells (black arrowhead). But the situation is reversed upon treatment with antibodies targeting IL1RAP (right).  (Mitchell et al., 2018)

A team of researchers led by Ulrich Steidl at the Albert Einstein College of Medicine found that antibodies, small hairpin RNAs, or genetic deletion targeting IL1RAP induce the death of AML cells, including leukaemia stem cells, isolated from patients. The effects were seen in the absence of immune effector cells, indicating that AML cells intrinsically depend on IL1RAP. In contrast, antibodies targeting IL1RAP had no effect on the growth and survival of normal blood cells. Antibody treatment also inhibited the proliferation of AML cells in mice without causing any negative side effects.

As its name suggests, IL1RAP works in conjunction with the interleukin-1 receptor to promote an inflammatory signalling pathway that could play a key role in the development of AML. But Dr Steidl and colleagues found that IL1RAP also enhances the activity of two other membrane receptor proteins, FLT3 and c-KIT, that are known to stimulate the proliferation of leukemic stem cells when activated by their ligands. IL1RAP antibodies inhibited the ability of these ligands to induce the proliferation of AML cells.

“Our findings show that IL1RAP can amplify multiple key pathways in AML, demonstrating a much broader role for this protein in disease pathogenesis than previously appreciated,” Dr Steidl explains.

Researchers are currently developing ways to prompt a patient’s own immune cells to selectively recognise and kill IL1RAP-expressing cancer cells, but AML patients generally have defective immune systems. This new research suggests that directly targeting IL1RAP with antibodies or specific drug molecules could be even more effective at killing AML cells. The findings also suggest that IL1RAP-directed immunotherapies could be even more promising than currently assumed. Because AML cells functionally depend on IL1RAP, they cannot simply down-regulate the protein to escape immunotherapy and are therefore less likely to develop therapeutic resistance.

The study is published in the Journal of Experimental Medicine,