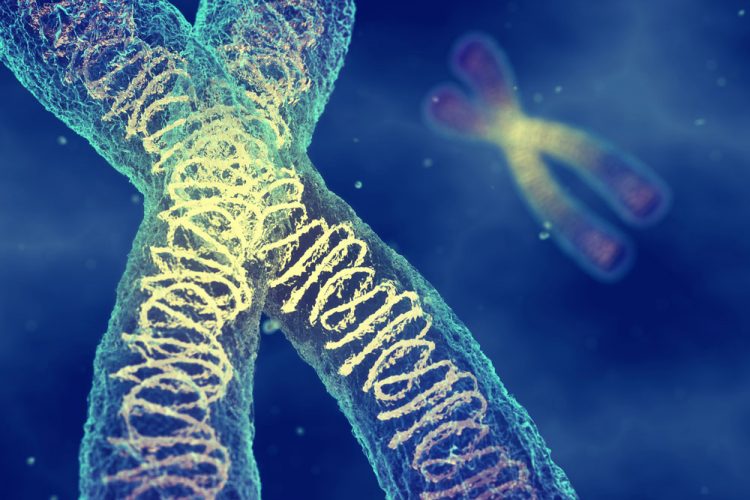 “We showed that the SMCHD1 protein influences gene expression by regulating the folding of the inactive X chromosome into its unique conformation, which prevents expression of its genes,” says Dr Chen-Yu Wang, of the MGH Department of Molecular Biology, lead author of the paper. “Mutations in SMCHD1 are associated with several human diseases, including a severe form of muscular dystrophy and a syndrome in which an infant’s nose fails to develop. Our finding suggests that misfolded chromatin – the chromosomal structure consisting of DNA wrapped around proteins called histones – may play a role in those diseases.”

When mammalian chromosomes fold themselves to fit into the nucleus of a cell, they typically are organised into two “compartments” – an active A compartment, which contains many actively transcribed genes, and an inactive B compartment, which contains a few genes that are rarely if ever transcribed. Each compartment is further partitioned into “topologically associated domains” (TADs) that contain genetic elements that frequently interact within a TAD but rarely between TADs.

X chromosome inactivation – which occurs in early embryonic development – reconfigures chromatin into a unique formation through the mediation of a large RNA molecule called Xist. The spreading of Xist across the chromosome induces it to fold into two large structural domains, which then merge into a “compartment-less” structure that suppresses transcription of the genes on the chromosome.

To investigate protein factors that may regulate the process of X inactivation, the team focused on the SMC family of structural proteins, which are known to regulate chromosome conformation. Previous studies found that SMCHD1 was highly enriched on inactive X chromosomes and appeared to be critical to the inactivation process. The team’s experiments in mouse cells first confirmed that the presence of SMCHD1 was necessary for the silencing of a large subset of genes on the inactive X chromosome.

They then found that the loss of SMCHD1 prevented the spreading of Xist across the chromosome and kept the two large domains, which the team named S1 and S2 compartments, from being merged into the typical compartment-less inactive X structure. By bridging the S1 and S2 compartments, SMCHD1 was found to induce their merging into the confirmation that prevents gene expression. Without the protein, the two compartments persist, allowing the expression of about 40 percent of the genes on what should be an inactive chromosome.

Senior author Dr Jeannie T. Lee, MGH Molecular Biology, notes that her team hopes to investigate further the process by which SMCHD1 merges the S1/S2 compartments and potentially how disease-associated SMCHD1 mutations may affect inactive X conformation and gene silencing. She says, “The knowledge gained could also be used to reactivate the inactive X chromosome to treat certain diseases, such as the neurodevelopmental disorders Rett syndrome and CDKL5 disorder. But because whole-X reactivation could potentially have unwanted side effects, one of the major goals of our research is to achieve specificity – turning on one or several specific genes but not all X-linked genes. We know that certain X chromosome genes are particularly sensitive to the loss of SMCHD1, so in the future, we may be able to harness that differential sensitivity to turn on specific genes.”

The study has been published online in the journal Cell.