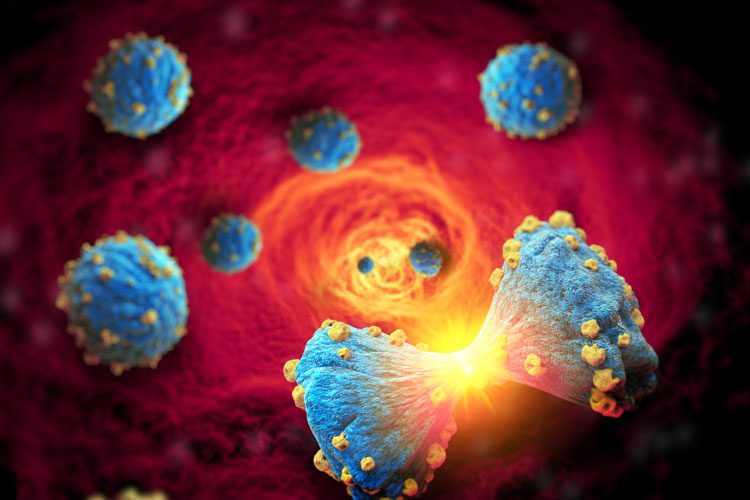 BRCA1 and BRCA2 are critical tumour suppressor genes–women carrying a mutation in one of these genes have up to an 80 percent risk of developing breast cancer and a 50 percent risk of developing ovarian cancer. Cancer drugs known as Parp inhibitors have recently been approved for treating patients with BRCA-driven metastatic breast cancer or recurrent ovarian cancer, but many patients’ cancers become resistant to the drugs. New drug targets for treating BRCA-driven cancer are urgently needed. Investigators from Brigham and Women’s Hospital have conducted a study to systematically identify new genetic targets on which BRCA2 cancer cells are more dependent than healthy cells and have tested these targets in the lab. Such “synthetic lethals” point to potential avenues for drug development.

“I’ve been studying DNA damage response for many years and have been developing tools to look for vulnerabilities in cancer cells,” said corresponding author Stephen Elledge, PhD, the Gregor Mendel Professor of Genetics and of Medicine at Harvard Medical School and Brigham and Women’s Hospital. “While Parp inhibitors are important, many people are developing resistance to them. We thought we might be able to find other pathways through which we could effectively kill cancer cells without harming normal cells.”

To search for new targets, lead author Kristen Mengwasser, an MD-PhD student at Harvard Medical School, Elledge and colleagues, used CRISPR and short-hairpin RNAs (shRNAs) to test 380 genes with a known or suspected role in DNA-damage response. The team carried out its tests in a pair of colon cancer cell lines–one with a BRCA2 mutation and one without–and in a pair of ovarian cancer cell lines. These screens and follow-up experiments helped the researchers narrow in on the two most promising targets: APEX2 and FEN1. Neither gene has been reported previously as a potential target for BRCA-driven cancer.

The team’s strongest finding was the flap endonuclease FEN1. When working appropriately, this enzyme plays several essential roles in DNA repair events, including removing “flaps” (overhangs of single-stranded DNA) during DNA replication. Normal cells can survive without it, but in cancer cells in which both copies of BRCA2 have been compromised, the loss of FEN1 results in cell death. The team found similar results for APEX2, which encodes an enzyme involved in another important DNA repair pathway. The team tested an existing FEN1 inhibitor on cells in the lab and found that it preferentially killed cancer cells with the BRCA mutation.

“It will be interesting to see whether drugs targeting these genes could complement Parp inhibitors and address the issue of drug resistance,” said Elledge. “This work is a good example of how studies rooted in genetics and basic biology can result in therapeutic implications that could be quite profound.”

The team’s findings are published in Molecular Cell.

One response to “New drug targets for BRCA-driven cancer uncovered”