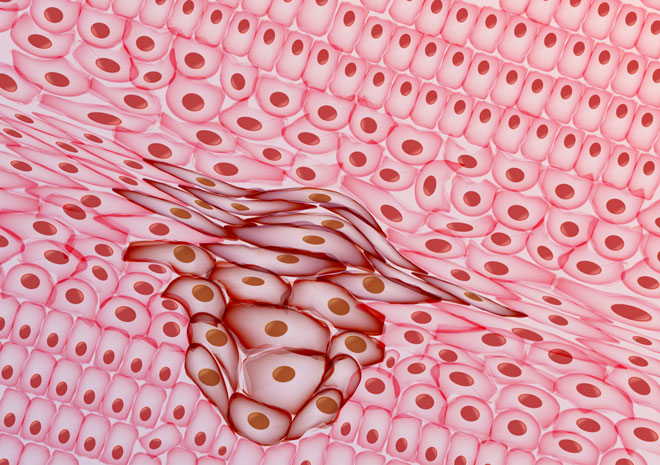 Vaccination with as few as four tumour antigens generated antigen-specific responses, reduced intestinal tumours, and improved survival in a mouse model of Lynch syndrome, suggesting that it may be possible to develop a cancer preventive vaccine for patients with Lynch syndrome, according to data presented at the AACR Annual Meeting 2019 last week.

“Lynch syndrome is an inherited condition that affects about one in every 280 individuals in the United States,” said Steven M. Lipkin, MD, PhD, the Gladys and Roland Harriman Professor of Medicine, professor of medicine in the Division of Gastroenterology and Hepatology, and vice chair for research in the Weill Department of Medicine at Weill Cornell Medicine in New York; and a geneticist at NewYork-Presbyterian/Weill Cornell Medical Center. “People with Lynch syndrome have a 70–80 percent lifetime risk of colorectal cancer, as well as an increased risk for other types of cancer, including small intestine, stomach, endometrial, bladder, and ovarian cancers.

“Currently, frequent screening to detect pre-cancers and early-stage cancer is the main approach used to prevent cancer in people with Lynch syndrome, although some people have risk-reducing surgeries and some take aspirin for colorectal cancer prevention,” continued Lipkin, who is also a member of the Sandra and Edward Meyer Cancer Center and the Caryl and Israel Englander Institute for Precision Medicine at Weill Cornell Medicine. “We are extremely encouraged by our pre-clinical data, which suggest that rationally designed cancer vaccines may prevent some cancers associated with Lynch syndrome. We are in the process of designing a clinical trial to test this hypothesis.”

The genetic mutations that cause Lynch syndrome prevent the proper repair of damaged DNA, leading to the accumulation of mutations in certain parts of the genome called coding microsatellites, explained Lipkin. The coding microsatellite mutations generate novel or modified proteins called neoantigens, which can be recognised by the patient’s immune system but usually do not yield a sufficiently robust immune response to prevent cancers from developing, he added.

In this study, Lipkin and colleagues investigated whether vaccinating mice with Lynch syndrome-associated neoantigens could stimulate a robust immune response that would have anti-tumour activity.

“Our preclinical data are very exciting because they provide strong support for continuing the investigation and development of immunoprevention strategies for patients with Lynch syndrome,” said Lipkin.