A new platform has the potential to better understand what dictates the invasive behaviour of brain tumours. 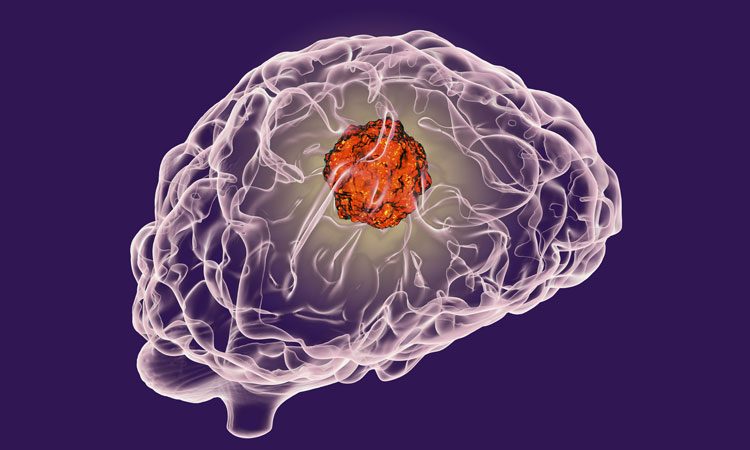 Three-dimensional (3D) human tissue culture models of brain cancers in a brain-mimicking micro-environment have been created which could advance the study of brain tumour biology and pharmacological response.

The researchers from Tufts University, US created models that include brain-derived extracellular matrix (ECM) – the network of proteins and amino acids with bound sugars in the brain. Alterations in ECM composition have been associated with brain tumour progression, which in turn alters patterns of genetic and protein expression in the tumour cells. 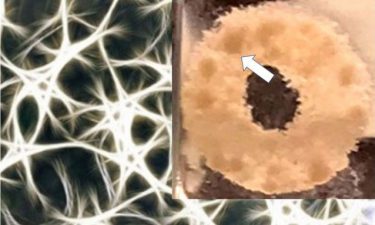 This shows a doughnut-shaped 3D silk scaffold (represented as a schematic in the background) treated with ECM and seeded with glioblastoma cells. Spherical growths of the tumour cells (~1mm dark spots – indicated by arrow) are observed after 1.5 months (credit: Tufts University).

The ECM-containing 3D matrix in this study has allowed for the propagation and study of primary tumour cells taken directly from the patient and to grow them in an environment more similar to the brain.

“The power of this platform is that we can tune the composition of the ECM to find out the role of each component in tumour growth and we can see the effect on tumour cells derived directly from the patient,” said David Kaplan, Stern Family Professor in Engineering. “Another important feature is that we can track the 3D growth of cells with non-invasive two-photon excited fluorescence metabolic imaging.

In other words, we can use non-invasive imaging to assess if they are viable and growing, or stressed and dying, in real-time.”

“With this platform, we have the potential to better understand what dictates the invasive behaviour of brain tumours and screen drugs for their effect on tumour growth of patient-derived cells,” added Disha Sood, first author of the study. “Although it’s a preliminary notion, the ability to maintain viable cultures of patient-derived tumour cells and metabolically track them non-invasively, suggests the possibility of monitoring the cells’ behaviour and drug sensitivity over time, to inform treatment decisions.”