Protein tag developed to aid in study of the immune system

A novel approach to better understand a basic defence mechanism of the immune system has been developed using the ISG15 protein which could lead to novel antimicrobial drugs. 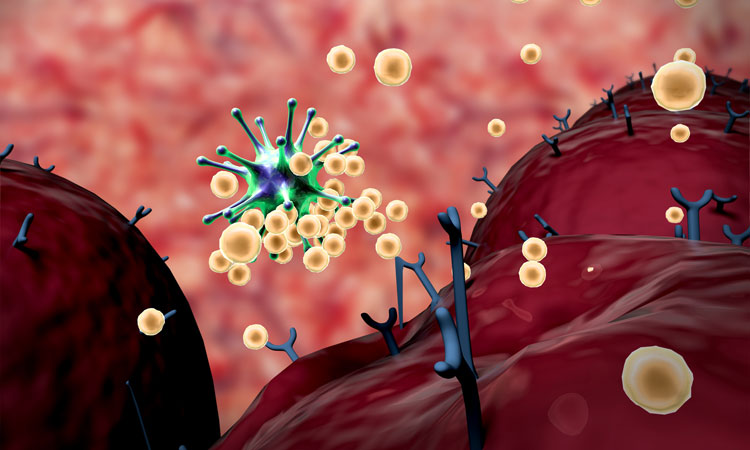 A novel approach has been developed using ISG15 (a small protein with a role in the immune system) to better understand a basic defence mechanism of the immune system. This means proteins tagged with ISG15 can now be identified and studied, allowing scientists to unravel its many functions in fighting disease, potentially leading to novel antimicrobial drugs.

The method was developed by scientists from VIB-UGent Center for Medical Biotechnology, University of Iowa, US and other collaborators.

To keep control of expressed proteins, cells can attach a chemical ‘tag’ onto a protein to modify its activity. One of the most well-known protein modifications is ubiquitin, which has various functions.

The scientists in this study investigated an ubiquitin-like modification called ISG15 which can be attached to target proteins. However, the molecular function of ISG15 is elusive, since the identity of the modified proteins and their exact sites of modification are still unknown.

“ISG15 and ubiquitin share the same amino acid sequence at their end, exactly where these modifiers are attached to target proteins,” said Francis Impens at the VIB-UGent Center for Medical Biotechnology. “As a result, the peptides derived from the proteins modified by ISG15 display the same tag as peptides derived from proteins modified by ubiquitin. So, we took advantage of the technology developed to identify ubiquitin modification sites for the identification of ISG15 modification sites.”

ISG15 is only expressed upon stresses such as a viral or bacterial infection so the scientists had to complement their approach with an infection model.

“As infection model, we chose the bug Listeria monocytogenes,” said Fabien Thery, co-first author of the study. “Leading to the ‘old French cheese disease’, Listeria is a food-borne bacterial pathogen hiding from the immune system inside host cells.”

This has led to the discovery of nearly a thousand ISG15 sites on more than four hundred protein targets during bacterial infection.

“We found that ISG15 targets numerous enzymes involved in metabolic processes, but also that it targets key regulators of autophagy, a process in response to a lack of nutrients inside a cell,” added Lilliana Radoshevich, PhD, University of Iowa. “It leads to the destruction of cellular components to generate new sources of energy and promote cell survival. Alternatively, autophagy can be used as an antibacterial strategy.”

This work revealed a new link between ISG15, cellular metabolism and autophagy. The scientists have already started to use their approach to investigate ISG15 targets during infection with other pathogens such as the Influenza virus or Coxsackie virus. These studies may reveal antimicrobial pathways of the immune system that can be exploited to design new drugs, the scientists have said.

The study appeared in Nature Communications.