The nucleocapsid as a novel drug target for Ebola virus

Using supercomputer stimulations researchers reveal that the structural stability of the Ebola nucleocapsid is depended on the presence of RNA and interactions with charged ions. 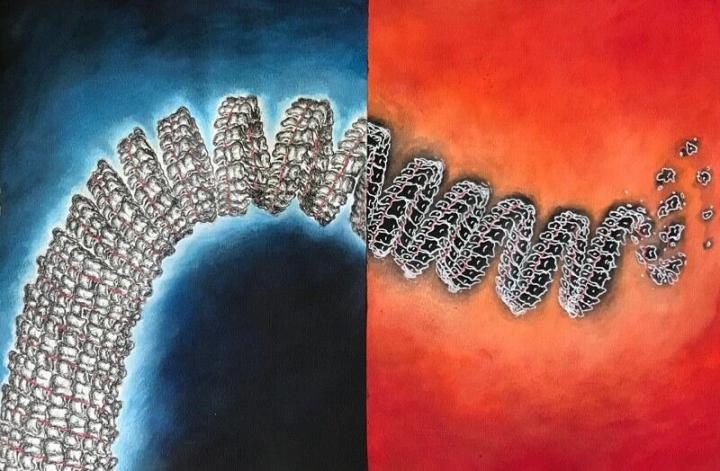 A coiling protein 'shell,' called a nucleocapsid, shown here, surrounds Ebola's genetic material, which consists of single-strand RNA. University of Delaware researchers are simulating the way molecules of this nucleocapsid move and interact, atom by atom, to understand their functions and expose targets for anti-viral treatments [Credit: Juan Perilla Laboratory].

As the world grapples with the COVID-19 pandemic, caused by the SARS-CoV-2 virus, there has been another outbreak of Ebola virus in the Democratic Republic of the Congo in recent months. Since the first outbreak in 2013, the Ebola virus has periodically emerged in Africa, causing bleeding and in many cases, death (mortality rate between 50 and 90 percent).

Researchers in the laboratory of Professor Juan Perilla at the University of Delaware, US, believe that the best way to combat viral pathogens is to understand them at the molecular level. So, Perilla and his team are using supercomputers to simulate the inner workings of Ebola, observing the way molecules move, atom by atom, to carry out their functions. In their latest study, published in the Journal of Chemical Physics, they reveal how the structure of the virus’s coiled protein shell, called the nucleocapsid, may be targeted by drugs that would destabilise it and destroy the virus.

“The Ebola nucleocapsid looks like a Slinky walking spring, whose neighbouring rings are connected,” Perilla said. “We tried to find what factors control the stability of this spring in our computer simulations.”

According to the researchers, the life cycle of Ebola is highly dependent on its nucleocapsid, which surrounds the virus’s genetic material: a single strand of ribonucleic acid (ssRNA). Nucleoproteins protect this RNA from being recognised by cellular defence mechanisms and also interact with other viral proteins, such as VP24 and VP30, to form a minimal functional unit for viral transcription and replication. The rod-like nucleocapsid also acts as a scaffold for viral assembly and a template for transcription.

To study the virus, the team built two molecular dynamics systems of the Ebola nucleocapsid. The first had 4.8 million atoms and included the ssRNA, alongside the nucleoprotein, water molecules and ions that stabilise the highly charged structure; the other contained only the nucleoprotein and these molecules and ions, included as a control to investigate the role of ssRNA. The systems were then simulated using the Texas Advanced Computing Center’s Frontera supercomputer, a task which took two months to complete.

“We found that ssRNA encapsidation results in stabilisation of the Ebola virus nucleocapsid and is essential for maintaining structural integrity of its helical assembly,” said Perilla.

Perilla commented that their new understanding of the nucleocapsid, the most abundant protein in the virus and a highly immunogenic component, “may facilitate the development of new antiviral treatments”.

Currently, Perilla and Jodi Hadden-Perilla are using supercomputer simulations to study the novel coronavirus that causes COVID-19. Although the structures of the nucleocapsid in Ebola and COVID-19 share some similarities – both are rod-like helical protofilaments involved in the replication, transcription and packing of viral genomes – that is where the similarities end. “We now are refining the methodology we used for Ebola to examine SARS-CoV-2,” Perilla said.