Scientists developed a new culture technique for alveolospheres which they used to study how alveolar cells respond to SARS-CoV-2 infection. 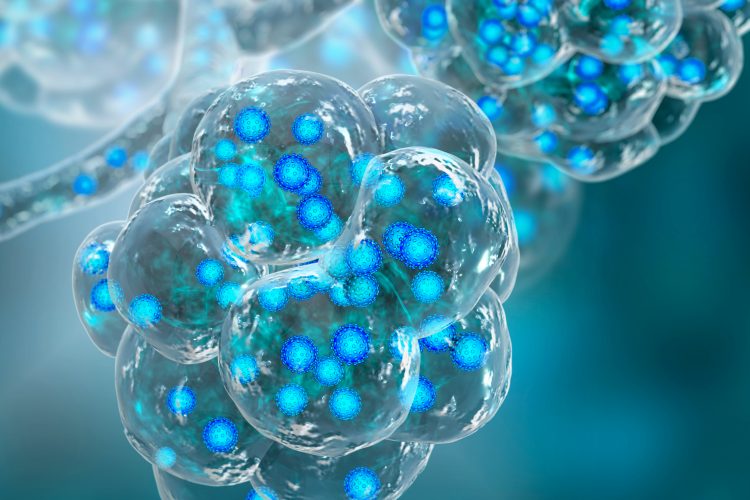 Researchers have created ‘alveolospheres’, a novel organoid model of the alveoli, and used them to study SARS-CoV-2 infection. In their experiments, the team found the lung tissue may initiate the cytokine storm that can lead to Acute Respiratory Distress Syndrome (ARDS) and that infected cells can induce apoptosis is their healthy neighbours.

Organoids, sometimes referred to as mini-organs, are derived from human tissue and therefore provide the closest ex vivo reproduction of many human diseases. Having been used to study and screen drugs for a wide range of diseases, including diabetes and fatty liver disease, researchers have now applied the tool to study SARS-CoV-2, the virus that causes COVID-19.

SARS-CoV-2 is known to infect a variety of cells in the airway, so long as they express the angiotensin-converting enzyme type-2 (ACE2) receptor which the virus uses to infect human cells. One cell type they infect is alveolar epithelial type-2 cells (AT2s). To establish the mini-lung organoid, researchers took a single adult stem cell from healthy lungs and used a new culture system to encourage it to divide and differentiate into AT2s. These cells were then allowed to multiply and went on to spontaneously assemble into structures that closely resemble alveoli.

The team said one reason that SARS-CoV-2 research had been held back was the lack of ex vivo models of human alveolar epithelium. They revealed that alveolospheres had been hard to grow because the medium required to propagate and drive the differentiation of AT2s was not well categorised. The researchers state that their new alveolosphere culture system is “scalable, chemically defined and modular” and, once infected with SARS-CoV-2, produces cells that are transcriptomically and histologically similar to samples taken from patients with severe COVID-19.

According to Purushothama Rao Tata, who led the research at the Duke University School of Medicine, US, cells infected with SARS-CoV-2 in their alveolospheres began producing pro-inflammatory cytokines, in particular interferons. Heightened production and secretion of these molecules is believed to cause the severest symptoms of COVID-19, including ARDS and organ failure. The team suggests that the lung tissue itself may initiate cytokine storm (the release of huge amounts of cytokines resulting in cell death and tissue damage) before the immune cells even arrive in the lungs.

The researchers added that they observed the ability of infected cells, which naturally go on to die, to induce the death of uninfected neighbouring cells. They said that both their findings provide new insights into COVID-19 pathogenesis.

The team concluded that now they had a defined alveolosphere culture system they would produce more organoids and continue to model COVID-19, in the hopes of identifying and testing promising new treatments.