A new study has identified the mechanisms through which the SARS-CoV-2 virus enters the brain and how the immune system responds once it does. 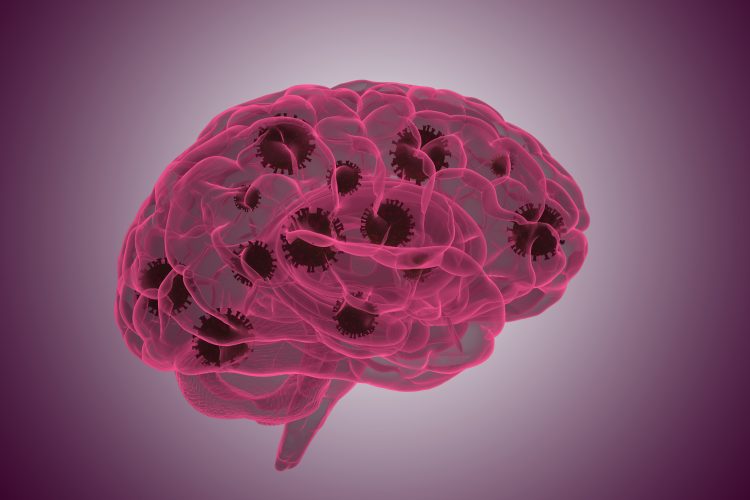 Using post-mortem tissue samples, researchers at Charité – Universitätsmedizin Berlin in Germany identified that the SARS-CoV-2 virus enters the brain via nerve cells in the olfactory mucosa.

The researchers said that it is well recognised that COVID-19, the disease caused by SARS-CoV-2 infection, is more than a respiratory disease. In addition to affecting the lungs, SARS-CoV-2 has also been shown to impact the cardiovascular system, the gastrointestinal tract and the central nervous system. More than a third of COVID-19 patients report neurological symptoms such as loss of/change in their sense of smell or taste, headaches, fatigue, dizziness and nausea. In some patients, the disease can even result in stroke or other serious conditions. While researchers thought these symptoms must be caused by the virus entering and infecting specific cells in the brain, they did not know how.

Under the joint leadership of Dr Helena Radbruch of Charité’s Department of Neuropathology and the Department’s Director, Professor Dr Frank Heppner, a multidisciplinary team of researchers has now traced how the virus enters the central nervous system and subsequently invades the brain.

In the study, researchers from various fields analysed tissue samples from 33 patients (average age 72) who had died after contracting COVID-19. They specifically looked at tissue from the olfactory mucosa and four different brain regions. Both the tissue samples and distinct cells were tested for SARS-CoV-2 genetic material and the Spike (S) protein found on the surface of the virus. They found that while there was evidence of the virus in various structures connecting the eyes, mouth and nose with the brain stem, the highest viral load was in the olfactory mucosa. 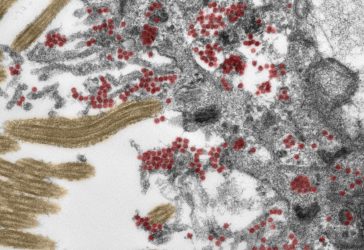 An electron microscope image (ultrathin section, artificially colored) shows a section of a ciliated cell in the olfactory mucosa. Large numbers of intact SARS-CoV-2 particles (red) are found both inside the cell and on cellular processes. Yellow: kinocilia [Credit: Michael Laue/RKI & Carsten Dittmayer/Charité].

By staining the tissue samples, the team were able to show using electron microscopy that there were intact coronavirus particles within the olfactory mucosa. These were found both inside nerve cells and in the processes of nearby epithelial cells supporting the nerves.

“These data support the notion that SARS-CoV-2 is able to use the olfactory mucosa as a port of entry into the brain,” said Professor Heppner. This is also supported by the close anatomical proximity of mucosal cells, blood vessels and nerve cells in the area. “Once inside the olfactory mucosa, the virus appears to use neuroanatomical connections, such as the olfactory nerve, in order to reach the brain,” he added. “It is important to emphasise, however, that the COVID-19 patients involved in this study had what would be defined as severe disease, belonging to that small group of patients in whom the disease proves fatal. It is not necessarily possible, therefore, to transfer the results of our study to cases with mild or moderate disease.”

Dr Radbruch commented that while their data suggests “that the virus moves from nerve cell to nerve cell in order to reach the brain” there may be other ways in which SARS-CoV-2 is transported, such as through the blood vessels.

In their paper, the team also investigated how the immune system responded to SARS-CoV-2 infecting cells in the central nervous system. In addition to finding evidence of activated immune cells in the brain and in the olfactory mucosa, they detected the immune signatures of these cells in the cerebral fluid. In some of the cases studied, the researchers also found tissue damage caused by stroke as a result of thromboembolism.

“In our eyes, the presence of SARS-CoV-2 in nerve cells of the olfactory mucosa provides good explanation for the neurologic symptoms found in COVID-19 patients, such as a loss of the sense of smell or taste,” explained Professor Heppner. “We also found SARS-CoV-2 in areas of the brain which control vital functions, such as breathing. It cannot be ruled out that, in patients with severe COVID-19, presence of the virus in these areas of the brain will have an exacerbating impact on respiratory function, adding to breathing problems due to SARS-CoV-2 infection of the lungs. Similar problems might arise in relation to cardiovascular function.”

The paper was published in Nature Neuroscience.