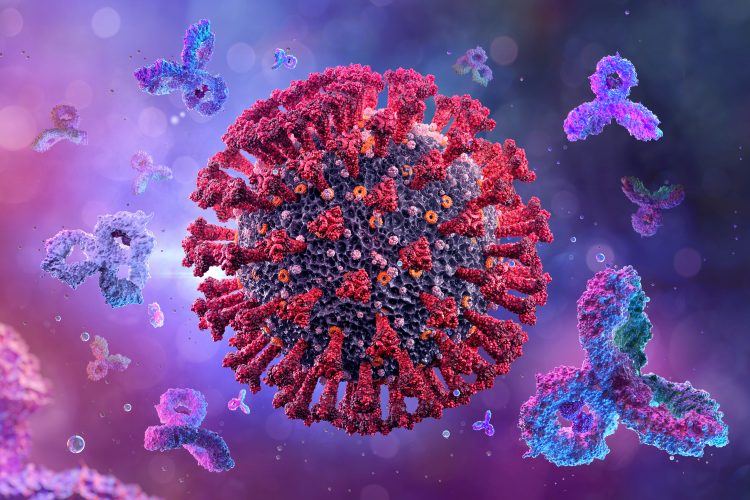 Using cryogenic electron microscopy (cryo-EM), researchers analysed the interactions of eight SARS-CoV-2 neutralising antibodies isolated from COVID-19 patients and classify them into categories by their structural confirmation. Their findings could be used to inform the development of antibody cocktails for clinical use.

COVID-19 is the disease caused by infection with the SARS-CoV-2 virus.

To infect human cells, Spike (S) proteins on the surface of the SARS-CoV-2 virus must bind to the human angiotensin-converting enzyme 2 (hACE2) receptor on the surface of host cells. The components of the S protein that actually interact with hACE2 are a trio of three protein domains, called receptor-binding domains (RBDs). These RBDs have two possible confirmations, they can either be ‘up’ – the open confirmation, which is required to bind to hACE2 – or down – the closed confirmation that enables SARS-CoV-2 to evade the immune system. 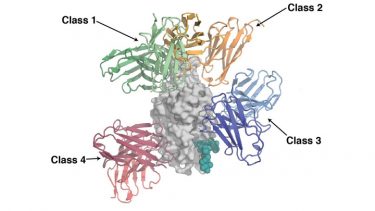 In a recent study published in Nature¸ a team of structural biologists at the California Institute of Technology, US, used cryo-EM to capture the complex molecular interactions between eight different antibodies isolated from the blood of people recovering from COVID-19 and SARS-CoV-2 at near-atomic scale. Each of the antibodies was shown to be highly effective at blocking SARS-CoV-2 infection in laboratory tests before being used in the study. The team say their findings offer important biological clues for how to treat and prevent COVID-19.

In their paper, the researchers used structural comparisons to classify the antibodies into four categories:

The researchers suggest that their findings explain why antibody cocktail therapies, those including multiple different types of antibodies, may offer better protection than monoclonal antibody treatments and could be used to identify combinations for clinical testing.

Additionally, the team suggest the information could be used to custom-design synthetic antibodies to neutralise SARS-CoV-2. The scientists said that others may want to copy one of the Class 2 antibodies for drugs or vaccines because it used a long CDRH3 with a hydrophobic tip to bridge between adjacent down RBDs, thereby locking the S into a closed conformation.

Article: Tackling the challenges of limited resources during a pandemic