Researchers have shown how different viruses such as HSV-1 and Zika can lead to microcephaly using brain organoids. 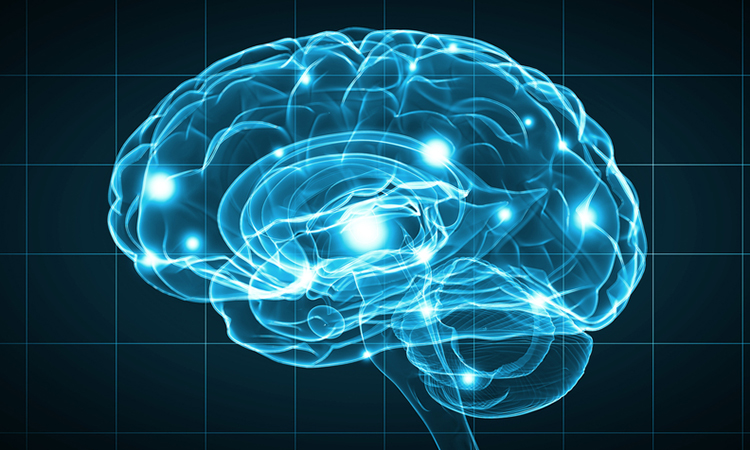 Researchers at the Institute of Molecular Biotechnology of the Austrian Academy of Sciences have demonstrated that different viruses can lead to brain malformations through diverse mechanisms by using human brain organoid models.

According to the team, microcephaly, a term referring to developmental malformations of the foetal brain, can be caused by diverse infections during pregnancy. The infectious agents in question are grouped under the general term of TORCH pathogens, in reference to Toxoplasma gondii, Rubella, Other, Human Cytomegalovirus (HCMV) and Herpes Simplex Viruses 1 and 2 (HSV-1 and HSV-2), as well as the more recently emerged Zika virus (ZIKV), which was also added to the group.

The question whether all TORCH pathogens lead to microcephaly through the same mechanism has remained obscured due to the absence of suitable experimental models.

“The two major difficulties in researching these conditions are, first, the delicate topic of testing noxious effects on foetal brain development during pregnancy which, understandably, prevents direct research on human foetuses and second, the unsuitability of laboratory animal models, as they are neither the natural hosts of the viruses nor do they represent an accurate model of human brain development. To this end, our group was able to compare three-dimensional (3D) human brain organoid models infected with different viruses. These infection models give us the closest possible insight into the human brain developmental outcomes of the viruses we study and help us dissect the underlying structural, cellular, transcriptional and immunological parameters,” explained first author Veronica Krenn, a postdoctoral researcher. 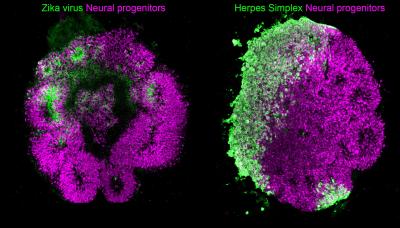 HBOs stained for the human neural progenitor cell (hNPC) marker Sox1 (magenta) showing infection by Zika virus (left, green) and by Herpes Simplex Virus 1 (right, green). These models were used to uncover the mechanisms used by these two viruses to cause microcephaly during pregnancy [credit: Krenn/CellStemCell/IMBA].

In the study, the researchers are able to bypass these difficulties and gain precious insights on phenotypes reminiscent of microcephaly in organoids. They did so by infecting 3D HBO cultures with TORCH viruses such as ZIKV and HSV-1, demonstrating that both ZIKV and HSV-1 spread in organoids and halt their growth by promoting cell death. Through transcriptional profiling, the team revealed a unique feature of HSV-1 infection in organoids, namely a propensity to impair their neuroepithelial identity. Another major finding is that although both ZIKV and HSV-1 attenuate the Type I interferon (IFN) immune response system in organoids, they appear to do so through different mechanisms, as is made evident by rescue experiments using distinct Type I IFNs.

The findings highlight the distinct paths used by various TORCH viruses to cause microcephaly and reveal complex cellular immune defences, such as a neuroprotective role of various Type I IFN responses. The importance of these findings also resides in their unique observation in 3D brain organoid cultures and not in two-dimensional (2D) culture systems, thus stressing the superiority of HBO models in reproducing virus-induced neuropathological conditions and their relevance in studying the mechanisms of viral infections.

Taken together, the researchers say this new research presents organoid infection models that could help test therapeutic agents against ZIKV and HSV-1 infections and better dissect the human interferon responses.

“By specifically infecting organoids with viruses, we can not only learn a great deal about the critical brain development interactions that are typically complex in humans. We will also be able to better target weak points of these viruses to find possibilities for new therapies,” said Jürgen Knoblich, the corresponding author of the study.

The results are published in Cell Stem Cell.

Institute for Molecular Biotechnology of the Austrian Academy of Sciences