Read our in-depth focus on biomaterial and nanoparticle-based formulations and a new rhinovirus vaccine
Discover how very long-chain polyunsaturated fatty acids could be used as a strategy to protect patients
Download your complimentary copy of our latest digital journal
[EBOOK] Read about the critical developments and applications in the antibody development workflow
Hear from industry leaders in our upcoming webinars – reserve your place today!
Free membership: sign up today to access all of our exclusive content
news

A combination of computer simulations and fragment screening have uncovered 27 molecular binding sites on tubulin, a protein of the cell cytoskeleton. 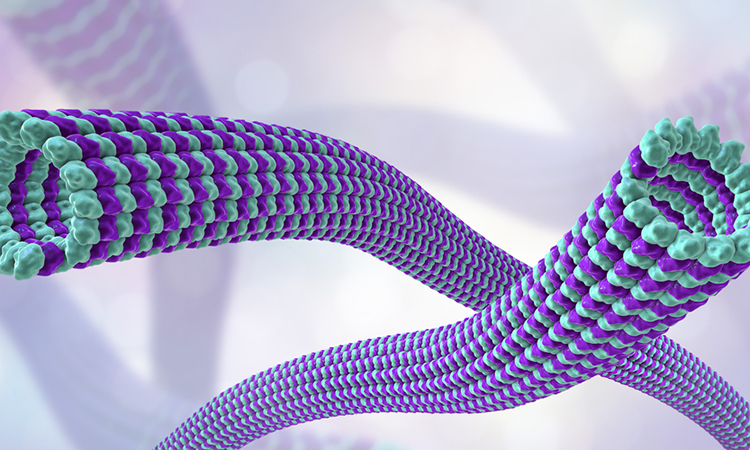 Through a combination of computer simulations and fragment screening, researchers at the Paul Scherrer Institute (PSI), Switzerland, along with collaborators, have discovered new binding sites for active agents – against cancer, for example – on a vital protein of the cell cytoskeleton. Eleven of the sites had not been known before.

According to the team, the protein tubulin is an essential building block of the so-called cell cytoskeleton. In cells, tubulin molecules arrange themselves into tube-like structures, the microtubule filaments. These give cells their shape, aid in transporting proteins and larger cellular components and play a crucial role in cell division. Tubulin thus performs diverse functions in the cell and in doing so interacts with numerous other substances.

“Tubulin can bind an astonishing number of different proteins and small molecules, several hundred for sure,” said Tobias Mühlethaler, first author of the study. “In this project, we addressed the fundamental question of how many binding sites in total exist on this vital protein. If we discover new ones, these could possibly be used therapeutically.”

In computer simulations, the researchers combed through the structure of the protein and identified places where other molecules could dock particularly well to tubulin, called binding pockets.  Subsequently, the researchers sought to verify such sites. For this, they used a method called fragment screening.

Starting with hundreds of crystals of tubulin, the researchers added individual solutions containing fragments of molecules that are typical precursors for promising active agents. Within an hour, the tubulin crystals were able to soak up as much of the fragment solution as they could hold. Finally the crystals were fished out of the liquid and exposed to synchrotron X-ray radiation. On the basis of the resulting diffraction pattern, the researchers are able to infer the structure of the crystal. Thus it could be determined if and where the molecule fragments have bound to the protein.

“Both methods, computer simulations and fragment screening, have their respective strengths and weaknesses,” said Michel Steinmetz, one of the lead researchers. “By combining them, we ensure that no binding site on the protein escapes our search.”

Overall, the researchers found 27 binding sites on tubulin where molecules or other proteins can dock, of which 11 had never been described before. In addition, the researchers identified 56 fragments that bind to tubulin and might be suitable for developing new active agents.

“Here we have developed a method for early discovery of so-called lead molecules and with that, new starting points for the development of active agents,” said Steinmetz.

The study is published in Angewandte Chemie International Edition.

Structure of protein that triggers neurodegeneration isolated and analysed