Professors Piergiorgio Percipalle and Gennaro Esposito summarise their study which revealed two nanobodies that could inhibit a non-structural protein of SARS-CoV-2. 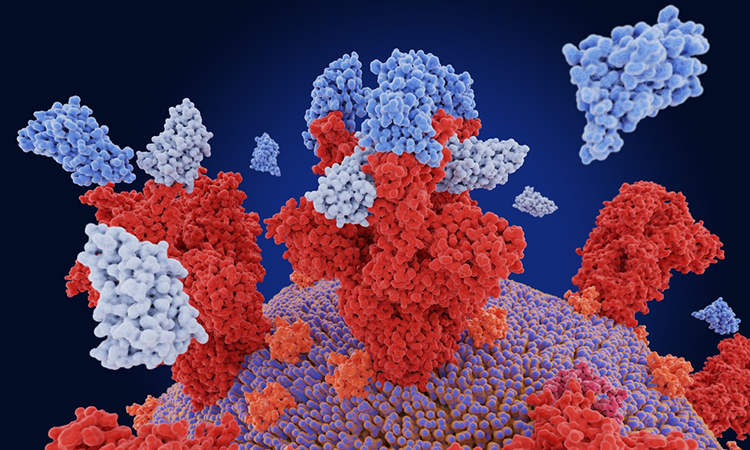 The need to counter the ongoing COVID-19 pandemic originating from the spread of the SARS-CoV-2 virus has prompted vast scientific research activity all over the world. The most tangible results are the different vaccines which, with varying efficacy, are making it possible to cope with infection, although mostly in richer countries for the time being. The recent research efforts have also led to diagnostic products, monoclonal antibodies (mAbs) and the first antiviral drugs to tackle SARS-CoV-2. The availability of effective drugs together with vaccines will be crucial for the eradication of the virus, as well as for the preparation of therapy protocols that can be administered in the event of the onset of viral variants that would prove resistant to the available vaccines.

As a part of this framework, an interesting and promising result came out in Advanced Biology1 from the groups of the New York University of Abu Dhabi (NYUAD) led by Professor Piergiorgio Percipalle and Professor Gennaro Esposito. The team reported the identification of two new nanobodies that could potentially inhibit the non-structural protein Nsp9 of SARS-CoV-2, which is crucial for the virus replication following infection of host cells.

Nanobodies are domains, that is, structurally autonomous regions, of single-chain antibodies, a class of antibodies smaller than conventional analogues. They were discovered over twenty years ago in camelids and sharks. In this study in particular, the scientists studied the interaction of Nsp9 with the two most promising species of a nanobody library, obtained from the immune response that lamas produce against Nsp9.

First, the two nanobodies were shown to be capable of binding to Nsp9 in biological samples, namely with purified recombinantly-expressed Nsp9 and with endogenous Nsp9 in the saliva of patients infected with COVID-19. 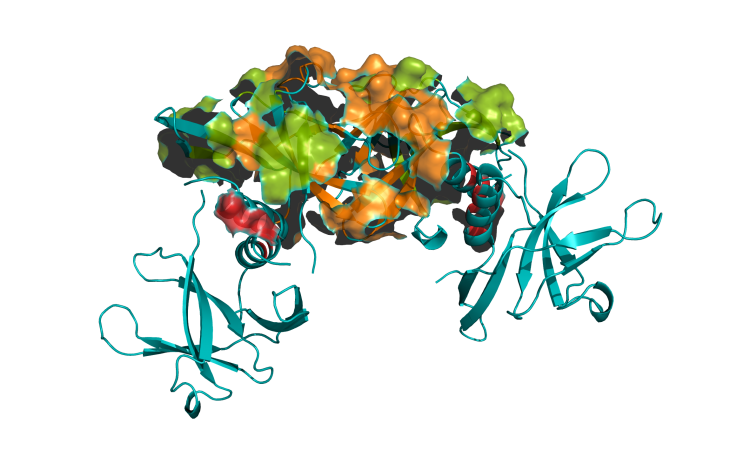 NMR-based mapping of the nanobody contacts on the SARS-CoV-2 Nsp9 tetramer. The SARS-CoV-2 Nsp9 tetramer with the dimer-dimer and monomer-monomer interfaces are highlighted in orange and red, respectively. The green surfaces indicate the location of the tetramer epitopes contacting the two identified nanobodies. An analogous epitope pair is present on the opposite face of the tetramer.

“The characteristics of those assays suggest that the nanobodies could lead to the development of highly sensitive, cost-effective diagnostic tools,” said Percipalle.

“The two discovered nanobodies could therefore represent the basis of an antiviral drug since the promoted Nsp9 aggregation is incompatible with the formation of the virus replication and transcription complex, which is essential for the propagation mechanism,” the two NYUAD scientists conclude.

Further studies are now underway to define the antiviral efficacy of the nanobodies and to formulate a diagnostic kit for a rapid salivary test.

To find out more about this study, read an exclusive Drug Target Review interview with Professor Esposito on determining the structure of nanobodies using NMR spectroscopy.

Professor Piergiorgio Percipalle is a tenured professor in the Science Division, NYUAD, in the Biology Department, NYU New York and Guest Professor at Stockholm University, Department of Molecular Biosciences. Before joining NYU, he was associate professor at the Karolinska Institute. As a postdoc, he trained at the Medical Research Council Laboratory of Molecular Biology, Cambridge, and at the Karolinska Institute. Following an undergraduate degree in chemistry, he performed predoctoral work at the International Centre for Genetic Engineering and Biotechnology (ICGEB) and received his PhD in molecular genetics from the International School for Advanced Studies. The research of Percipalle focuses on gene expression regulation during mammalian development and differentiation to implement personalised medicine. He also studies environmental effects on gene expression and cell metabolism, including simulated loss-of-gravity and pathogens such as SARS-CoV-2.

Professor Gennaro Esposito graduated in chemistry at Naples University in 1979. In 1982 he became NMR researcher at ENI, the Italian public oil company. In 1990 he moved to Udine University as biophysics researcher and then as associate professor of applied physics. In 2018 he joined NYUAD as visiting professor of chemistry. He also worked as visiting scientist in the UK (Oxford, London) and Switzerland (Lausanne) and visiting professor in France (Grenoble) and Japan (Osaka). The research area of Esposito mainly involves NMR studies of protein structure and dynamics, in particular on DNA binding domains, extracellular matrix components, amyloidogenic proteins and more recently nanobodies.