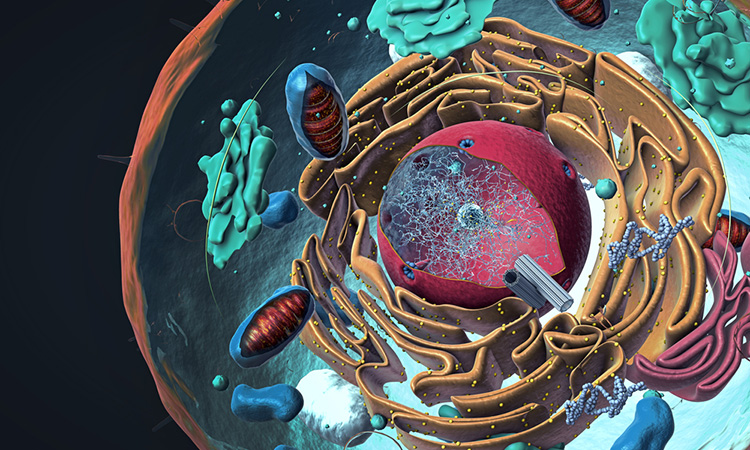 A team of Italian scientists from the Universities of Bologna, Campania and Naples have developed a novel method for screening and measuring intracellular lipid droplets (LDs). The researchers from the team also propose a novel biomedical application based on a recently developed tool, named tomographic phase microscopy in flow cytometry (TPM-FC), as outlined in Opto-Electronic Advances.

TPM is an optical microscopy technique that enables the reconstruction of three-dimensional (3D) spatial distributions of the refractive index (RI) of a single cell without using exogenous labels. Therefore, it provides a quantitative characterisation of a cell’s biophysical properties (mechanical, electrical and optical) that can be inferred from the 3D morphological and RI-based tomographic information.

…the potential of TPM and FC have now been combined, creating the TPM-FC imaging technique”

According to many researchers, TPM has great potential in biomedical sciences as it can be a very powerful tool for early disease detection and drive clinical applications towards personalised medicine. The most important feature of TPM is that the 3D information it provides is quantitative and achieved without chemical markers, unlike conventional fluorescent and confocal microscopy. This label-free aspect avoids the common limitations related to cell staining, which can be costly, labour-intensive, operator-dependent and time-consuming. Labels can also alter the overall imaging (photobleaching) or change the cell physiology (photodamaging), hindering applications for disease diagnosis or screening. TPM is therefore a non-destructive microscopy technique and thus a cell can survive the measurement. Cells can also be observed and analysed in their natural state without being affected by the toxic effects of exogenous agents that can alter their morphology and/or functions. From this 3D data assay, various information about the cell can be retrieved or inferred, for example, cancer cells can be distinguished among the healthy tissue or it can be discovered if a drug has the expected effects on cell diseases. Subcellular structures can be visualised and measured by getting information on cell phenotypes, morphogenesis or some of their functionalities can be revealed by evaluating their number and size.

However, conventional TPM systems work in static conditions, which limit the possibility of performing high-throughput experiments. As cellular populations are often heterogeneous with respect to cell cycle phase, size, volume and physiological state, a low-throughput analysis risks discarding the intracellular variability, which is essential for assaying diversity and searching for rare cells with specific features (eg, tumour or stem cells).

The most commonly used modality of TPM is for analysing cells in a plate or cell-culture dish, with single cells analysed one at a time. What is important to consider with personalised medicine, though, is that to have single cell information for a high number of cells is to also have significant statistical data.

FC systems are currently adopted for this purpose in combination with fluorescent microscopy. FC represents the gold standard technique since it combines the single-cell imaging capabilities of microscopy with the high-throughput capabilities of FC. In conventional imaging FC, thousands of two-dimensional (2D) images are collected per second, but their informative content is often limited to the cell morphology and fluorescence-based signature. In the last decade, imaging FC aroused much interest due to its ability to catch the intracellular variability inside heterogeneous populations. However, combining a TPM with an FC system has been challenging to date.

A combination with flow cytometry

In the new study, the potential of TPM and FC have now been combined, creating the TPM-FC imaging technique. According to the researchers, this is a significant step forwards along the path of development for TPM-FC methods as a key biological issue is solved – the 3D high-throughput visualisation and RI-based quantitative measurement of LDs in each live suspended cells.

Analysis of LDs is a growing field, especially since these organelles have been recognised as dynamic particles with key roles in several cell regulation processes. Initially described exclusively as fat storage organelles, it is now understood that LD dysregulation may have implications in diseases and so evaluation of LD-related parameters may be exploited as biomarkers. Indeed, LDs have been described to have a role in various pathologies, including diabetes, atherosclerosis, fatty liver disease, pathogen infections, neurodegenerative diseases and cancer. Moreover, they are recognised as structural markers of inflammation, since a remarkable increase in LD number and size rapidly occurs in immune cells in response to inflammatory stimuli. Most recent evidence shows that monocytes from COVID-19 patients display an increased LD accumulation with respect to healthy blood donors, suggesting a possible involvement of these organelles in SARS-CoV-2 pathogenesis. Although the mechanisms linking specific LD structural characteristics to a certain function are still not completely known, much evidence shows that variation in LD number, size, ultrastructure, motility, lipid/protein content and interactions with other organelles significantly influences many cellular processes. Furthermore, LDs dynamically interact with most intracellular organelles, including the mitochondria, peroxisome, lysosomes, Golgi apparatus and nuclei. Therefore, their 3D spatial organisation inside the cellular volume could be a potential disease biomarker.

However, dissecting an LD’s number, size and interactions with other organelles in a non-destructive, high-throughput mode has been elusive, especially in terms of evaluating LD 3D spatial organisation. Gold standard techniques for LD analysis such as transmission electron microscopy (TEM) and fluorescent microscopy (FM), while being highly specific and sensitive, present a bottleneck, supplying only 2D images on a small portion of the cell volume. Furthermore, both approaches are destructive and low-throughput.

The method proposed in the new study retrieves significant parameters on spatial correlations and LD 3D positioning in cells. In the study, for the first time, LDs are visualised and quantitatively measured in 3D in live suspended cells while they are flowing along a simple and commercially available microfluidic channel. According to the researchers, this enables the high-throughput detection and investigation of LDs in cell populations. 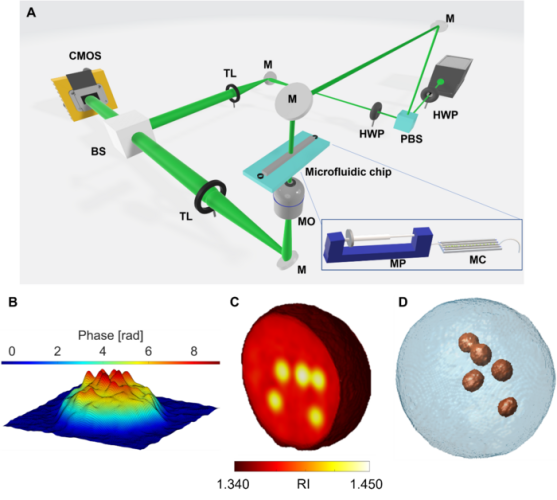 Tomographic reconstruction of LDs in live suspended cells by TPM-FC. A Opto-fluidic configuration of the TPM-FC system. PBS – polarising beam splitter; HWP – half wave plate; M – mirror; MO – microscope objective; MC – microfluidic channel; MP – microfluidic pump; TL – tube lens; BS – beam splitter; CMOS – camera. B pseudo-3D visualisation of the phase-contrast map of an ovarian cancer cell, in which LDs are localised at the highest peaks (ie, phase values). C 3D RI tomogram of a monocyte cell, in which LDs are evident at the highest RIs (from yellow to white). D Isolevels representation of the monocyte cell in C, in which LDs (red particles) have been segmented at the highest RIs [credit: OEA].

To test the robustness and reliability of this strategy, the researchers investigated human ovarian cancer cells and monocytes, comparing the results with TEM and FM imaging techniques. Numerical image processing was implemented for identifying the phenotype of each detected LD and their spatial correlations and positioning into the 3D cell volume. On the basis of the attained results, the researchers say it will be possible to investigate a high number of cells and thus accomplish significant statistical analysis in a label-free and non-destructive mode.

This makes the development of novel diagnostic or therapeutic tools in biomedicine viable, to provide the exact 3D location of LDs inside cells, as well as their volume, shape, RI-based statistics and dry mass at the single-cell level.

The combination between the 3D label-free and quantitative single-cell analysis of TPM and the high-throughput single-cell recording of imaging FC could open new powerful applications in biomedicine or strengthen the existing ones. Thanks to the results reported, the team say that it is evident TPM-FC has advanced in terms of both experimental recording and numerical processing for addressing successfully real-world biomedical issues, while pushing into the direction of label-free intracellular imaging.

The scientists expect that the new method will greatly contribute to the field of LD biology, enabling researchers to dissect their roles with more detail and consequently take full advantage of their clinical potential.