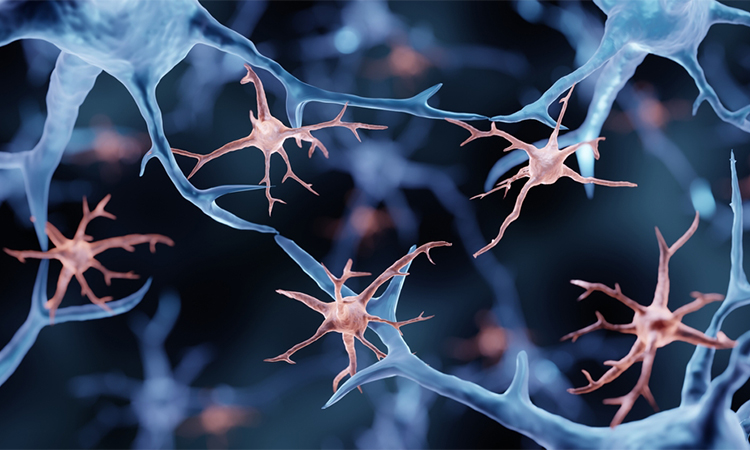 A ground-breaking study by researchers at the Picower Institute for Learning and Memory at the Massachusetts Institute of Technology (MIT), US, found two problems that emerge in Alzheimer’s disease in mouse models and human post-mortem tissue: a build-up of double-stranded breaks (DSBs) in the DNA of neurons and the inflammatory behaviour of microglia, the brain’s immune cells.

The study, recently reported in Science Advances, found that neurons actively trigger an inflammatory response to their genomic damage. The researchers say neurons have not been known to signal the brain’s immune system in Alzheimer’s disease.

“This is a novel concept in neuroscience: the idea that neurons can be activating inflammatory activity in response to DNA damage,” said lead author of the study Dr Gwyneth Welch. “The general idea was that neurons have a more passive relationship with microglia regarding age-associated neuroinflammation.”

Instead, the team reported that neurons coping with mounting DSBs go through stages of first trying to fix their fractured DNA and then, when it fails, sending out via molecular signals to microglia, which responded by taking on a more inflammatory state. In experiments where the scientists interrupted the immune signalling, they prevented microglia from entering that state and degrading neural circuit connections or synapses.

This is a novel concept in neuroscience: the idea that neurons can be activating inflammatory activity in response to DNA damage”

Members of the research team have been studying DSBs in the context of Alzheimer’s for over a decade. The scientists say the new findings add to the emerging understanding of their role in Alzheimer’s.

“We have a long-standing interest in understanding DNA breaks in neurons,” said senior author Professor Li-Huei Tsai. “We previously showed that DNA double-stranded breaks are necessary for the induction of activity-regulated gene expression in neurons, but we also observed profound DNA damage in neurons in the early stages of neurodegeneration.

“We now know that DNA-damaged neurons exhibit senescent phenotypes and play an active role in eliciting an immune response from microglia and perhaps astrocytes,” Tsai added. “This is mediated by the activation of the NFkappaB transcription factor. Moreover, we identified two cytokines secreted by damaged neurons to recruit microglia and elicit microglial response. Importantly, we show that inhibition of NFkappaB rescued synaptic loss in neurodegeneration, further elucidating of impact of neuroimmune response on synaptic integrity and cognitive function.”

In her thesis research, Welch used the lab’s “CK-p25” mouse model of Alzheimer’s, in which disease pathology can be induced. She observed a timeline in which neurons with DSBs appeared within a week, peaked in number after two weeks and then tapered off, becoming notably reduced by six weeks. Meanwhile, those neurons also lost their ability to express a standard marker of neuronal identity. Welch realised there seemed to be stages to the process of coping with DSBs. First, neurons have few DSBs and strong identity (baseline), then high DSBs with no loss of identity (stage one), then high DSBs and a loss of neuronal identity (stage two).

To understand what cells were doing differently in each stage, the team used multiple transcriptomics technologies, which track differences in gene expression. Their analyses revealed that neuronal identity genes were most strongly expressed at baseline, DNA repair genes were strong during stage one, and immune signalling genes were particularly prominent during stage two.

Among the immune signalling genes were ones governed by the master transcription regulator NFkappaB. These included the cytokines Ccl2 and Cxcl10.

To see if these changes were due specifically to DSBs, the team treated neurons without any induced pathology with a chemical called etoposide that causes DSBs. Similar gene expression patterns evident in the induced mice were recapitulated in the ones treated with etoposide. When the researchers also looked at gene expression in the brains of people with DSBs and with Alzheimer’s they also found many significant overlaps.

“We found that stage one and stage two gene signatures were active in human DSB-bearing neurons,” Welch and her co-authors wrote. “This neuronal immune signature was further amplified in the context of AD pathology, suggesting that it may serve a functional role in disease-associated neuroinflammation.”

A big role for microglia

Having established that DSB-afflicted neurons employ NFkappaB to send out immune signals such as Ccl2 and Cxcl10, Welch and the team then asked what the effect was. Given that the lab in 2017 had characterised a late-stage inflammatory response on the part of microglia in Alzheimer’s, they hypothesised that neurons might be responsible.

For this analysis, the used spatial transcriptomics. They divided up both uninduced and induced mouse brains into many areas and rated each area based on the strength of their DSB signal. Then they analysed gene transcription in each area and found that locations with high DSBs also had many more microglia in an inflammatory state than locations with low DSBs. They could also directly image this relationship, yielding the observation that inflammatory microglia (evidenced by abnormally large cell bodies) were co-located with high-DSB neurons. 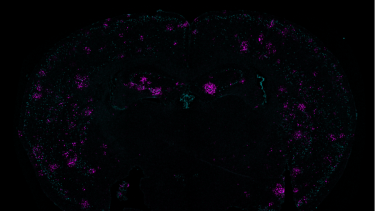 To further test the hypothesis, they disrupted NFkappaB-regulated transcription in neurons by interfering with a key molecular cog in that machinery called p65. That step resulted in reduced proliferation of microglia and reduced microglia cell body size. It also induced beneficial changes in microglia gene expression, making them more consistent with their normal “homeostatic” state.

In other experiments, they found that etoposide-treated neurons expressed Cxcl10 and Ccl2 but that disrupting NFkappaB reduced that expression. The team also saw that depleting the two molecules from the brains also prevented microglia from becoming reactive.

Looking back at the neurons, the researchers saw that while knocking down NFkappaB activity did not prevent them from dying, it did preserve circuit connections, or synapses, on the neurons that remained alive. The team explain that this finding is critical as because the circuit connections that underlie brain function and microglia are known to prune those.

As NFkappaB is known to help prevent cell death, Welch said knocking it down is not likely to be a therapeutic strategy.

“It is more a proof-of-principle that if you turn off a major switch for inflammation, that will change how microglia and neurons interact,” she concluded. “If your goal is to target inflammatory pathways, focusing on specific signalling molecules might be the more precise way to intervene.”

Related organisations
MIT, Picower Institute for Learning and Memory at the Massachusetts Institute of Technology (MIT)

MIT, Picower Institute for Learning and Memory at the Massachusetts Institute of Technology (MIT)