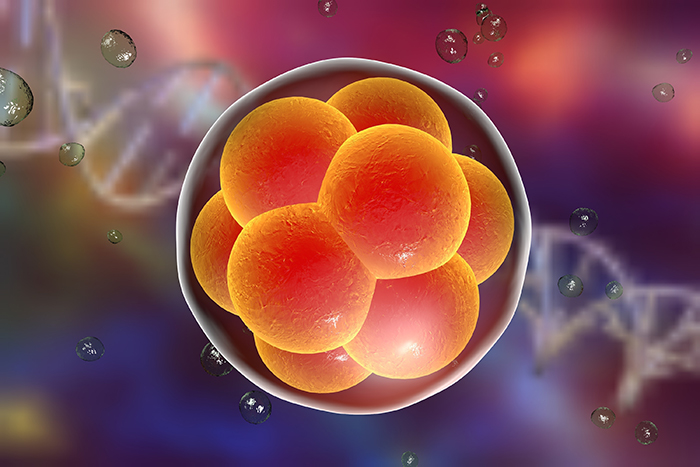 A landmark study using CRISPR-Cas9 to edit a genetic mutation in human embryos has shown that the DNA-repair mechanism(s) is more effective in early embryos than in patient-derived induced pluripotent stem cells (iPSCs) and maybe even somatic cells.

Researchers repaired DNA in embryos made with sperm containing the inherited heterozygous MYBPC3 genetic mutation responsible for hypertrophic cardiomyopathy (HCM) and found that, if performed at the same time as fertilisation, 72% were free of the HCM mutation – a higher rate than in previous studies, and without off-target effects.

Professor James Adjaye, Director of the Institute for Stem Cell Research and Regenerative Medicine at Heinrich Heine University in Dusseldorf, and member of the Drug Target Review Editorial Advisory Board, described the study, published in Nature, as “well thought through and executed brilliantly, especially regarding the comparative use of iPSCs and the derived embryos after in vitro fertilisation.”

This is an important finding for basic research and a necessary pre-requisite for correcting mutations at the oocyte or preimplantation embryo level, said Prof Adjaye. But he pointed out that the results were based on a single patient as the donor, so additional replicates / donors were needed to statistically validate the finding.

While the drug discovery industry did not, and would not, use gene edited/corrected human preimplantation embryos for drug screening or testing, CRISPR per se was ideal for generating isogenic iPSC-based disease (same genetic background composed of healthy and disease cells) models for drug screening.

Prof Adjaye suggested that the industry should focus on identifying the components of the repair machinery in the embryo compared to adult derived cells, discover how to take advantage of it, and incorporate it into CRISPR-based protocols in adult cells.

In earlier studies on CRISPR-Cas9 editing in human preimplantation embryos, gene-editing components were added after fertilisation, in contrast to this latest US-Korean study from Oregon Health and Science University. The low levels of mosaicism observed in this study could be attributed to the fact that gene editing occurred before the first cell division took place.

“Interestingly, the gene-corrected preimplantation embryos developed in a similar manner to the control embryos, with 50% developing to the blastocyst stage, which is the stage where the embryos have the potential to develop further into the foetus and placenta.”

Study authors Ma et al did not observe off-target effects and they suggested this might be due to the fact that they – unlike other previous investigators – used purified recombinant Cas9 protein instead of plasmid DNA, which might have enhanced the specificity due to a more controlled level of Cas9 enzyme activity.

“All said and done, more experiments are needed to address these and other yet-to-emerge questions before CRISPR-Cas9 can be routinely implemented in therapy. Pre-implantation Genetic Diagnosis (PGD) still remains the favoured and standard approach in preventing the transmission of deleterious genetically inherited diseases to offspring.”

Justin Bryans, Executive Director of Drug Discovery, at LifeArc, described the work as: “An exciting development for the drug discovery industry, who have attempted gene therapy in the past with rather underwhelming results (for example trials on cystic fibrosis), and will likely lead to a significant investment in this field by pharma and biotech companies to capitalise on this discovery. Of course, it is too early to say if this therapy would work for all monogenic diseases, including those caused by autosomal dominant mutations, so traditional drug discovery efforts in this area will likely continue until this becomes clear.”

Dr Bryans warned of potential issues, however. At present this technology is only useful for in vitro gene correction in embryos so it would not work after birth (although research is ongoing in the pharma/biotech sector on cell therapies to tackle genetic defects after birth). This would necessitate an extensive screening programme of in vitro fertilised embryos to spot those that have a mutation and where this technology could work, which would be unlikely to be available to all, he said. Many diseases do not become apparent until after birth so traditional drug discovery and cell therapy efforts would still be required for these individuals.