Under the microscope: Exploring phage display technologies for drug discovery and early development

With over 20 years’ of expertise in phage display, IRBM applies its extensive peptide and antibody libraries to discover lead therapeutic candidates. Dr Licia Tomei, Director of Display Technologies, IRBM, discusses the company’s phage display capabilities and how they accelerate the drug discovery process.

What is the advantage of using phage display technology to detect binding partners compared to other methods?

I think the beauty of utilising the phage display platform is that you can interrogate a vast number of different molecules quickly and efficiently. Applying iterative rounds of affinity selection (panning) allows you to investigate a huge biological space, to identify the best and most promising binders for a particular target in a relatively short timeframe. Compared to mRNA display, which can only screen receptors in vitro, phage display has the added advantage of being able to screen cells.

While most of our panning is performed on cells, it is also possible to run affinity selection of our libraries in vivo – particularly peptide libraries. This can be useful when interrogating a complex biological process that cannot be easily replicated in vitro, such as penetration of the blood-brain barrier.

With antibody libraries, we can rapidly conduct an affinity maturation step on phage after initial lead selection with our IgG1 affinity maturation library. For peptides, it is slightly different as affinity maturation on phage is not easily done. At IRBM this step is managed by our peptide chemistry team, which takes putative leads, optimises them and dials out liabilities. Both teams are located at our state‐of-the-art facility near Rome, Italy, facilitating close collaboration and integration.

Which libraries does IRBM offer and what features do they provide?

We offer both peptide and antibody libraries, with significant work being done to constantly improve the quality and number of phage libraries. We deliberately construct libraries, replicating natural features so we can almost always discover a peptide with very high affinity to a target. Our peptide libraries are primarily cyclic, in a Cys-constrained format and therefore rigid in conformation, increasing the possibility of finding a hit that binds well to its target. As we expand our collection, we are also incorporating macro-cyclic libraries to increase the conformational rigidity of the displayed peptides. This could potentially enhance selectivity and binding affinity of positive hits.

We can also build focused libraries based on the known interaction surfaces between two proteins. If the interaction is defined and we can access the crystal structure of the proteins, we can begin to generate a target‐dependent library. One successful example of utilising a target‐dependant library allowed us to increase the affinity of a lead to a target protein from micromolar to picomolar affinities within five months, something peptide chemistry would struggle to achieve alone in such a short time.

What are the most effective methods for screening phage display-generated peptide and/or antibody candidates?

Phage display – for peptides and antibodies – is mostly used to find binders to surface proteins. The best strategy is to use cells during the selection process, if possible, as this is the most relevant approach to interrogate libraries for targets in their native state.

For one project, we could not directly verify the binding of phages to their cellular target and were unable to measure the interaction.

However, we did observe that the phages were able to activate the receptor of interest, indirectly demonstrating a binding effect.

The screening thus indicated that the peptides activating the receptors were real hits. They were then converted into high-affinity binders during a lead optimisation campaign.

How important is collaboration to IRBM’s approach?

All our processes are designed in close collaboration with our partners, which is one of the advantages of working with IRBM.

We always share a common goal and are relentless – never giving up until we have explored every possible avenue.

At IRBM, having a clear understanding of our partner’s vision, paired with our passion for science and focus on integrity, forms an important foundation that promotes success. 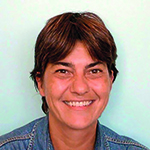