A new CAR T-cell therapy for B-cell cancers promises to reduce the antigen escape currently found in therapies that only target CD19. 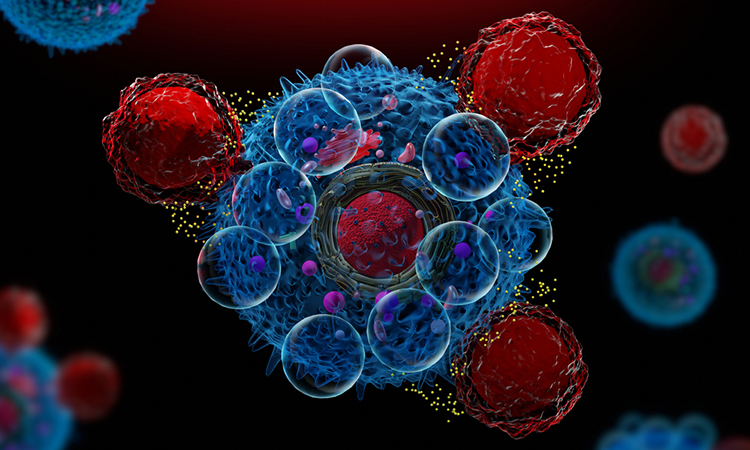 Researchers at University Hospitals Seidman Cancer Center and Case Western Reserve University, both US, have developed a novel approach to chimeric antigen receptor (CAR) T-cell therapy for B-cell cancers that has shown success in pre-clinical studies. The team say that the new therapy triples the targeted antigens on cancer cells – a “back up” approach that promises to greatly reduce the potential for antigen escape currently found in CAR T-cell therapies that solely target CD19.

The new B-cell activating factor (BAFF) CAR T product developed by the researchers binds specifically to three receptors instead of one – BAFF-R, BCMA and TACI, providing more therapeutic options. At least two of these three receptors are found in almost all B-cell cancers, with some cancers expressing all three. Experimental results show that the BAFF CAR T is effective at killing multiple B-cell cancers in vitro and in vivo. According to the team, because the new BAFF CAR T-cell therapy is based on a ligand protein and not an individual antibody fragment, it can target all the BAFF receptors on the cancer cell.

“Cancer cells are tricky,” said Dr Reshmi Parameswaran, senior author of the study published Nature Communications. “The cancer cells will shed the CD19 antigen and suddenly become CD19-negative and therefore not respond to the CD19 CAR T-cell therapy. Thus, there is a great need to identify alternative targeting strategies and CAR designs. With the BAFF CAR T, we hope that even if one receptor is lost, the others will do the job. Also, cancer cells that do not express CD19 but express BAFF receptors can be targeted, such as multiple myeloma.”

The researchers showed that these BAFF CAR T cells are both functional and specific in targeting the three BAFF receptors expressed by multiple B-cell cancers. They demonstrated robust in vitro and in vivo cytotoxicity exerted by BAFF CAR T-cells against mantle cell lymphoma, multiple myeloma and acute lymphoblastic leukaemia xenograft mouse models.

Unlike CAR T products that target CD19, which kill both early and mature B cells, the BAFF CAR T spares early B cells because these cells do not express BAFF receptors.

An Investigational New Drug (IND) application to the US Food and Drug Administration (FDA) will be filed in the coming weeks and the team is looking to launch a clinical trial of BAFF CAR T-cell therapy in patients with non-Hodgkin lymphoma in the next several months.