Researchers have eradicated malignant tumours in mice by combining an immunotherapy agent with a molecular delivery system that targets tumour acidity. 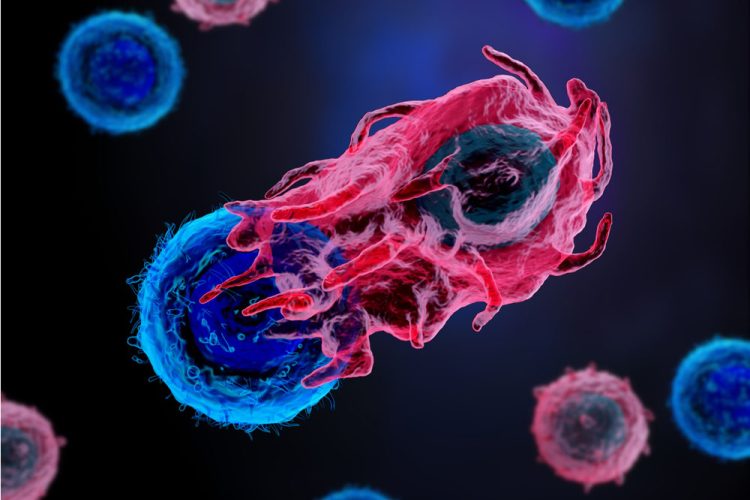 Researchers from the University of Rhode Island (URI) and Yale University, both US, have demonstrated the efficacy of a promising new approach to deliver immunotherapy agents to fight cancer.

The approach involves tethering an immunotherapy agent called a STimulator of InterferoN Gene (STING) agonist to an acid-seeking molecule called pH-low insertion peptide (pHLIP®), which is derived from bacteriorhodopsin. The pHLIP molecules target the high acidity of cancerous tumours, delivering their immunotherapy cargo directly to cells in the tumour microenvironment. Once delivered, the STING agonists engage the body’s innate immune response to fight the tumour.

Research led by Donald Engelman at Yale showed that pHLIP has a special affinity for acidic environments. Engleman commented: “When pHLIP encounters a cell membrane with a neutral pH, it will sit on the surface briefly and then pull away. But if it is in an acidic environment, then the peptide folds into a helix, crosses the cell membrane and stays there.”

The team has shown that they can tether molecules to the part of the pHLIP peptide that enters the cell membrane. Those cargo molecules could be diagnostic agents that help doctors to see tumours more clearly, toxins that kill cancer cells or immuno-modulators like the STING agonist. pHLIP, as it only enters cells in highly acidic environments, can target tumour cells while leaving healthy cells alone.

In a study published in Frontiers of Oncology, the team tested whether targeting via pHLIP would increase the effectiveness of STING agonist activity. They gave 20 mice with small colorectal tumours (100mm3) a single injection of the pHLIP-STING agonist. Within days, the tumours disappeared entirely in 18 mice.

The researchers also treated 10 mice with larger tumours (400 to 700mm3) with a single injection. Seven of those mice saw tumour eradication. For comparison, 10 mice received injections of untargeted STING agonist. Tumours remained in all mice, despite a modest slowing of growth for a short time.

When cancer cells were injected in mice that had been tumour-free for 60 days, new tumours failed to develop in those mice. The scientists therefore suggest that once the immune system is primed to attack tumour cells, it continues to do so without additional treatment.

While the researchers caution that results in mice do not always translate to humans, the findings lay the groundwork for a potential clinical trial testing the safety and effectiveness in cancer patients. pHLIP-based treatments are already approved for clinical trials, so the team hopes they will be able to move forward quickly.

“What we show here is that using pHLIP to target tumours through their acidity, we can successfully go after a variety of different cell types within the tumour microenvironment and achieve synergistic and quite dramatic therapeutic effects,” said Professor Yana Reshetnyak, senior author of the new research from URI.”