In this article, Dr Lien Lybaert describes how the innate and adaptive immune system work together to produce an effective and durable antitumour response. She explains why the best strategy for personalised cancer therapy is therefore to identify major histocompatibility (MHC) binding epitopes to cover the full antigenic repertoire of tumour cells. 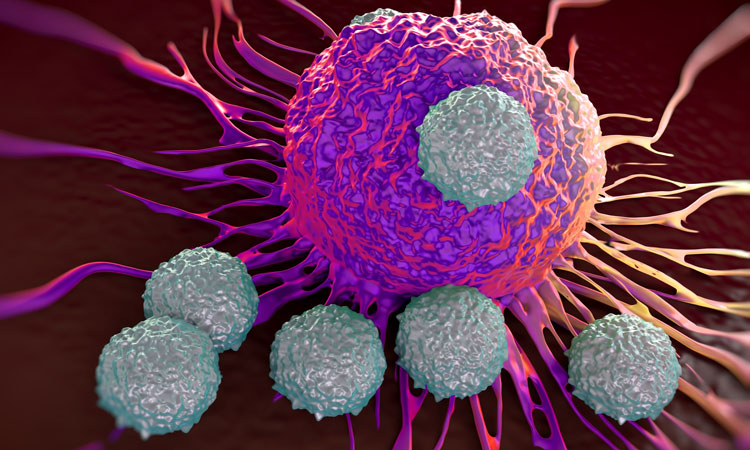 The immuno-oncology field has emerged based on a concept called cancer immunoediting, which encapsulates the dual role of the immune system in providing protective immunity against malignancies but also shaping – and even promoting – tumour growth.1 This article focuses on how the immune system can promote successful tumour remission, highlighting the crucial role of CD4 T cells and neoantigens present via the MHC class-II pathway.

Immunosurveillance – an interplay of the innate and adaptive immune system

Immunosurveillance involves the processes by which immune cells scan the body for foreign pathogens, such as bacteria, viruses, but also cancer cells, and eliminate them. Different immune cells are recruited when cancer growth is detected, involving both innate immune cells – macrophages, natural killer (NK) cells and dendritic cell (DCs) – and adaptive immune cells – B cells and T cells.2 Macrophages are primarily phagocytes triggered by cytokines which are produced by tumour cells or CD4+ helper T cells (TH1) to differentiate into tumoricidal M1 macrophages. NK cells are designed to recognise those cells that downregulate MHC-I expression to evade immune recognition, a process cancer cells often exploit. The absence of MHC-I results in the triggering of NK cells, leading to lysis of the target cells via secretion of perforin and granzymes. In addition, both M1 macrophages and NK cells produce pro-inflammatory mediators, thereby inducing recruitment and activation of other immune cells, such as DCs.

DCs are the critical connection between the innate and adaptive arms of the immune system, as they are highly efficient in pathogen recognition, eg high expression of pathogen recognition receptors (PRRs), uptake, processing and antigen presentation, as well as providing the necessary signals for optimal activation of lymphocytes. Upon recognition and uptake of tumour antigens, DCs maturate due to stimulation of the PRRs and processing of the antigen. This is followed  on the DC cell surface via MHC-I or MHC-II.3,4 The latter is necessary to activate the adaptive immune system. These mechanisms enable DCs to provide the three necessary signals to activate T lymphocytes.5,6 Indeed, CD4+ and CD8+ T lymphocytes are primed upon recognition of MHC oncopeptide complexes by their T-cell receptor, and are simultaneously activated through cytokine secretion as well as by co-stimulation of their CD28 receptor by CD80 or CD86 which is present on the DC surface. This ultimately leads to clonal expansion of the T lymphocytes. Depending on the cytokine profile different subsets are activated, ie, CD4+ TH1 or follicular helper T cells (TFH), CD4+ and CD8+ effector T cells as well as memory T cells, all with their own task in building a strong antitumour response.

CD8+ effector T cells or cytotoxic T lymphocytes (CD8+ CTLs) and CD4+ CTLs are specialised in recognising MHC oncopeptide complexes presented on tumour cells for which they are primed by the DCs. This leads to the destruction of their target through apoptosis or lysis via secretion of cytotoxins. Whereas effector CD8+ cells recognise MHC-I-antigen complexes, the CD4+ T cells focus on MHC-II-peptide complexes.7,8

Next to effector T cells, memory T cells are also induced, which are essential for prolonged protection against relapse and/or metastasis. CD4+ helper T cells provide support to immune cells and aid the development of an all-embracing antitumour response. CD4+ TH1 cells facilitate CTL as well as macrophage-mediated killing of tumour cells, induce immune cell recruitment and provide help in CD8+ memory T cell differentiation, expansion and maintenance.9-11 In addition, TFH cells interact with B cells, promoting their differentiation into memory B cells as well as plasma cells, which in turn secrete antibodies that can bind the oncopeptides presented on the tumour cell surface for which they are primed. This binding evokes antibody-dependent cellular cytotoxicity (ADCC) or complement-dependent cytotoxicity (CDC), leading to cancer cell lysis.9,12,13

Altogether, it is clear that a wide network of different immune cells work together to achieve tumour eradication (see Figure 1). The overall result is tumour cell lysis or apoptosis, which evokes the release of endogenous danger signals (DAMPs), cytokines and cancer antigens within the vicinity of the tumour. It enhances the immunogenicity of the tumour microenvironment, leading to recruitment and activation of immune cells against other antigens. This further fortifies and broadens the anti-tumour immune response.14-16

The importance of CD4 T cells

A distinction should be made in the different pathways that MHC-I versus MHC-II-bound oncopeptides trigger on binding with T cells. It has previously been believed that the MHC-I pathway was the main driver in antitumour immunity, however, it has been shown that the MHC-II pathway is of equal importance.

MHC-I-oncopeptide presentation by antigen‑presenting cells (APCs) is necessary to activate CD8+ T lymphocytes. DCs mainly drive the CD8+ T-cell activation as they are the most efficient APCs next to macrophages, which also have antigen-presenting capabilities, although to a lesser extent as their primary function is phagocytosis.16 The MHC-I pathway is crucial because successful T-cell activation leads to proliferation to CD8+ CTLs, which are highly efficient in recognising and eradicating the tumour cells that present these oncopeptides on their cell surface.8 The latter also explains why it was long believed that CD4+ T cells cannot induce tumour cytolysis and the MHC-II pathway was thought to be not that important as the majority of the malignancies lack MHC‑II expression.9 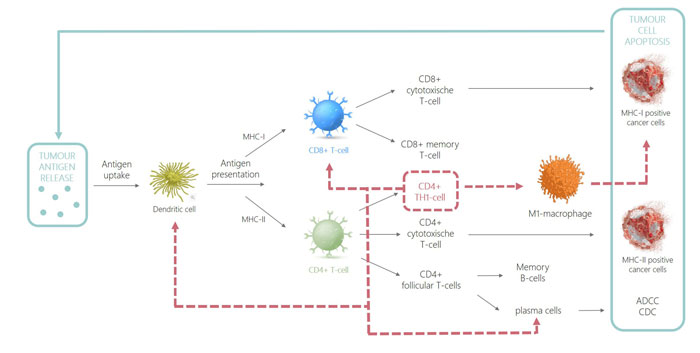 As CD4+ T cells only recognise MHC-II-peptide complexes, it was assumed that CD4+ T lymphocytes did not have tumoricidal functionality. However, it has been shown that CD4+ T cells have both indirect and direct effector functions. CD4 T cells can directly eradicate tumour cells provided that they are MHC-II-positive. It has additionally been shown that CD4+ T cells can also indirectly be tumoricidal in cancers that lack MHC-II expression. This is possible due to the secretion of tumour antigens by cancer cells followed by processing and presentation of the oncopeptide onto MHC-II in antigen-presenting cells like DCs or macrophages in the tumour-draining lymph nodes.17 Recognition of this MHC-II-peptide complex by CD4+ T cells leads to activation and polarisation into CD4+ TH1 cells, which can in turn indirectly induce cytolysis by stimulation of M1 macrophages and plasma cells. This enhances their cytolytic function and production of opsonising antibodies, respectively.7,18 In addition, CD4 TH1 cells recruit innate immune cells as well as activate dendritic cells and license them into efficient induction of CD8 memory T cells.19 An overview of how tumour eradication is achieved by the immune system, highlighting the prominent role of CD4+ TH1 cells (dotted red line), is illustrated in Figure 1.

Aside from these newly found direct and indirect effector functions of CD4+ T cells, this subset also has a broad spectrum of helper functions described above that are highly important to obtain a robust and long-lasting immune response. Without CD4+ TH1 cells, the efficacy and duration of the effector function of CD8+ CTLs would not be optimal due to the lack of TH1 cytokine stimulation2,10,20 and no CD8+ memory T cells would be formed as well.9-11 Additionally, TFH cells can activate a humoral response through interaction with B cells. Following uptake, processing and presentation onto MHC-II of tumour antigens on the B-cell surface, this complex is recognised by TFH cells stimulated by the same antigen. TFH cells offer additional stimulation of B cells, which induces proliferation and differentiation into plasma cells and memory B cells.9,12 The combination of these functions clearly shows that the MHC-II pathway is of utmost importance in developing a strong immune response.

Both the innate and adaptive immune system work in close collaboration together, and in the case of the adaptive immune response, both CD4+ and CD8+ T cells are required21,22 to ultimately result in a broad and durable antitumour response. In the case of personalised cancer treatment, utilising only CD8 epitopes could result in a suboptimal immune response that is not strong enough and does not evoke a long-lasting memory response. In most situations, it is therefore important to identify both MHC-I and MHC-II binding epitopes for treatment purposes, effectively including the complete antigenic range of a tumour cell.

Dr Lien Lybaert studied pharmaceutical sciences at Ghent University, Belgium, after which she obtained her PhD in pharmaceutical sciences wherein she focused on the design of immune‑modulating personalised cancer vaccines. She is now Scientific Alliance manager at myNEO, a Ghent-based startup that focuses on personalised medicine and genomic-informed drug discovery in key therapeutic areas of oncology and immunology. 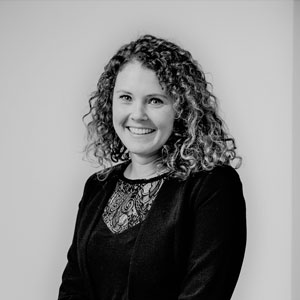