Scientists have made a significant breakthrough in understanding how the molecular machines that produce key proteins are cleaned and maintained.  .. 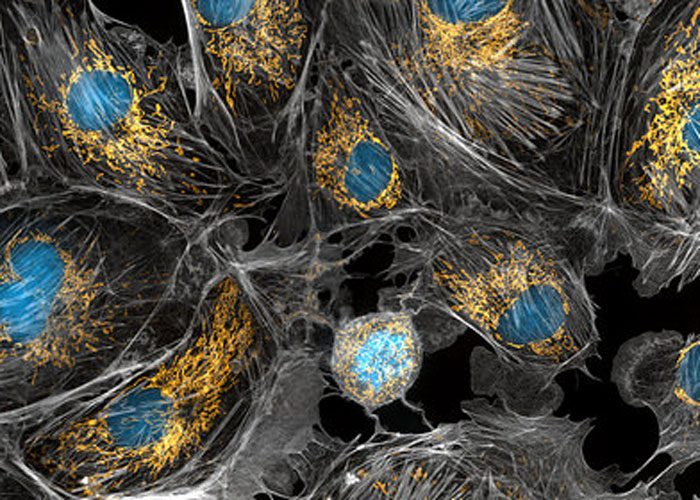 Scientists have made a significant breakthrough in understanding how the molecular machines that produce key proteins in the power packs of cells are cleaned and maintained.

University of Sussex academics, working with colleagues around the globe on a project led by the Institute for Research in Biomedicine (IRB Barcelona), have shown that the enzyme EXD2 is critically involved in maintaining efficient protein production in mitochondria – the compartment responsible for making the energy required for cells to survive and replicate.

It is hoped the discovery, could be used to target tumours in cancer patients in a new way while also significantly adding to the understanding of the vital role mitochondria plays in the functioning of a healthy cell.

The research indicates that mitochondrial ribosomes, the cellular machines responsible for protein production in the mitochondria, interact with EXD2. Ribosomes read RNA messages to convert genetic information encoded by genes into the production of proteins that carry out the major functions within cells.

However, in cells, these protein production machines must first be assembled and during this process they can prematurely bind to RNA molecules that “clog up” the works, preventing efficient protein production. It appears that a major role of EXD2 is to bind to these RNA molecules and cut them up to prevent this from happening.

Dr Joana Silva, of the Genomic Instability and Cancer Laboratory at IRB Barcelona, said: “EXD2 targets messenger RNA to keep the mitoribosome “clean” until it is mature and ready to generate proteins. In the absence of EXD2, cells are severely defective for mitochondrial protein production.”

Sussex’s role in the project, which involved scientists based at a host of institutions worldwide, was to identify what “flavour” of nucleic acid (DNA or RNA) EXD2 prefers to bind to and cut up.

Aidan Doherty, Professor of Biochemistry at Sussex’s  Genome Damage and Stability Centre, said: “Our role in this incredibly complex project was to help pinpoint the molecular function of this enzyme. It was clear that EXD2 looked like a known DNA repair enzyme called WRN but we showed that, despite this similarity, it is preferentially involved in RNA, rather than DNA, metabolism. This project has helped further our understanding of the importance of maintaining efficient protein production in mitochondria, which are vitally important for supplying the energy required to enable cells to survive. Its importance can be seen in the devastating impact of often fatal genetic disorders caused by malfunctioning mitochondria and in the growing global effort to correct these disorders.”

These findings run contrary to a previously published study claiming that EXD2 was involved in DNA repair processes within the nucleus of the cell.

Travis H. Stracker, head of the laboratory from the Genomic Instability and Cancer Laboratory at IRB Barcelona, said: “We have provided extensive evidence that EXD2 is a mitochondrial protein and that its main function is to facilitate the production of proteins in the mitochondria. The results highlight the complexity of mitochondrial protein production and demonstrate that many levels of regulation remain to be elucidated.”

Mitochondrial energy generation in tumours is gaining increased scrutiny in the fight against cancer, with some advocating the inhibition of protein production as a possible therapeutic target. It is hoped this discovery could be useful in designing such strategies to target tumours in patients, while also adding to our understanding of the vital role that efficient mitochondrial protein synthesis plays in the functioning of healthy cells.

The study has been published in Nature Cell Biology.

Institute for Research in Biomedicine (IRB Barcelona), University of Sussex