Researchers in Spain have identified a function of the MT4-MMP protease (an enzyme that breaks down proteins) that could be targeted as a potential treatment for some infections, as well as tumour metastasis. 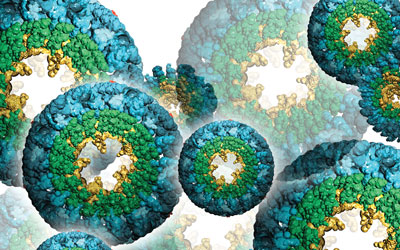 The study was carried out at the Centro Nacional de Investigaciones Cardiovasculares Carlos III (CNIC) in Madrid, Spain and was led by Dr Alicia G Arroyo. The results showed that blockade of the protease MT4-MMP increases the surveillance activity of a type of white blood cell in the circulation; that of monocytes. These cells are the largest white blood cells in the immune system and detect foreign invading material in the blood.

Commenting on the implications of these findings, Dr Arroyo said: “(they) have possible clinical implications and could contribute to strategies to eliminate foreign or undesired materials from the blood, such as infectious agents or tumour cells.” Furthermore, it “suggests new strategies to combat infection or prevent metastasis, which are currently being evaluated for patent protection.”

Our immune system consists of circulating leukocytes (white blood cells) that have specialised functions. One portion of this population is inflammatory monocytes that are released rapidly to the circulation in response to injury and generate an immune response at the injury site. However, there is another monocyte population tasked with “surveillance of the blood-vessel interior, giving rise to the name blood-patrolling monocytes,” explained Dr Arroyo. These monocytes rarely migrate to sites of tissue injury, and therefore their role in inflammation is less known.

The CNIC team conducted in-depth analysis of the function of patrolling monocytes in inflammatory disease and the mechanisms that regulate their vascular surveillance activity. As a model, the researchers studied the inflammatory process of atherosclerosis, wherein the injury signal is triggered by the deposition of cholesterol, which induces the migration of inflammatory monocytes and, to a lesser extent, patrolling monocytes. Once in the vessel wall, the monocytes differentiate to macrophages, which engulf injurious material, such as the accumulated cholesterol.

First author Cristina Clemente explained: “The first things we observed were that early atherosclerotic plaques in mice lacking MT4-MMP (a member of the matrix metalloprotease family) accumulated more macrophages and that atherosclerosis was accelerated when these mice were fed a high-fat diet.” The researcher also observed that early lesions in mice lacking MT4-MMP selectively accumulated more patrolling monocytes, whereas inflammatory monocytes were recruited as normal.

However, when the MT4-MMP-deficient mice were treated with the CCR5 inhibitor Maraviroc (used to treat patients with HIV) the migration of patrolling monocytes to atherosclerotic plaques was blocked, preventing the macrophage accumulation and accelerated atherosclerosis. Thus, blockade of MT4-MMP in early phases promotes atherosclerosis, yet could also potentiate the response to treatments to combat infection or prevent metastasis. However, Dr Arroyo stressed that “we don’t know if this acceleration of atherosclerosis is maintained at later stages, and this is something that will need to be analysed.”

The authors also identified that MT4-MMP can cut integrin αM, a crucial leukocyte adhesion receptor. Thus, in the absence of the protease, this receptor accumulates on the surface of patrolling monocytes. Through collaboration with CNIC colleague Cristina Rus, the research team used intravital microscopy to visualise the surveillance activity of patrolling monocytes, detecting increased numbers of these cells in inflamed vessels of mice lacking MT4-MMP.

This research paper was published in Nature Communications.