Cryo-EM was used to image the antibodies attaching to the circumsporozoite protein, which is the most abundant protein on the surface of malaria… 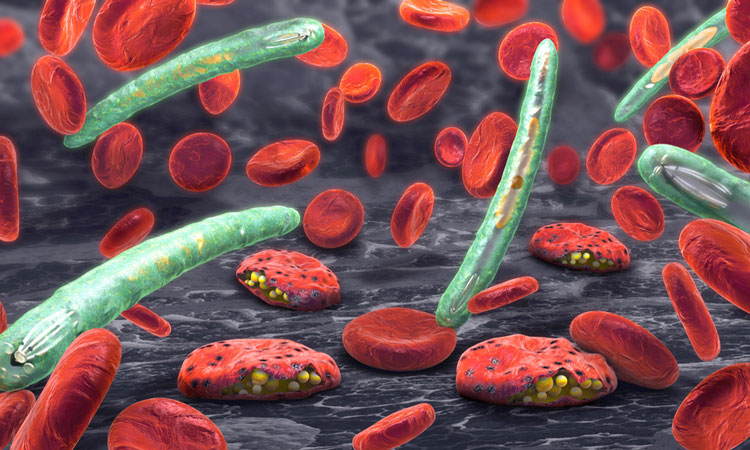 Researchers investigating how the human immune system defends against malaria have uncovered a rare phenomenon: antibodies working together to bind to a vulnerable spot on the parasite.

The new research, shows that antibodies working together can result in a protein on the parasite’s cell surface locking it into a spiral conformation, like a wide corkscrew, blocking the parasite from starting its life cycle in the human host and, hence, protecting against infection.

“The first images were quite remarkable and gave us our first insights into how the extended surface peptide could be recognized,” said Dr Andrew Ward, a Scripps Research Professor and corresponding author of the study. “CryoEM was uniquely suited to solving this structure and opens up the door to solve others like it. To help make an effective vaccine, we need to understand the right mode of recognition of this typically flexible peptide by antibodies.”

The study is part of an international effort to improve upon the most advanced malaria vaccine, called RTS,S, that has been in clinical trials. The candidate vaccine is currently about 25 to 50 percent effective depending on the vaccine regimen, but with hundreds of thousands of people still dying of malaria each year, researchers are looking for ways to redesign or reformulate vaccines.

To do this, scientists on the California campus of Scripps Research are investigating the antibodies that the human body produces when given the RTS,S vaccine. They are especially interested in antibodies that bind to the malaria parasite early in its life cycle and protect against infection-and whether these antibodies mimic those produced by natural infection.

“If you can block that first stage in humans, you can block the entire life cycle of the parasite,” said Jonathan Torres, research assistant at Scripps Research and co-first author of the study.

These protective antibodies are known to bind to malaria’s circumsporozoite protein, the most abundant protein on the surface of the parasite, but no one has been able to get a clear look at how they do it. Understanding how these antibodies do their jobs may help guide the design of malaria vaccines that can spark the same antibody response. This technique is called rational vaccine design.

Using an imaging technique called cryo-electron microscopy (EM), the scientists got the first images of an antibody bound to the circumsporozoite protein. Study co-first author Dr David Oyen, a research associate at Scripps Research, said he was surprised by what the cryo-EM structures revealed.

The protein’s shape has always been hard to picture because of a large low-complexity region in the center of the protein consisting of many four amino acid repeats that give the protein a floppy, flexible shape. Dr Oyen thought antibodies would bind to this area “like beads on a string.”

Instead, the cryo-EM structures showed the repeat region of the circumsporozoite protein locked into a spiral structure, with 11 antibody fragments (Fab311) jutting out from their binding sites, which consist of two repeats, and radiating tangentially from the elongated spiral.

Even more surprising, the spiral stability is imparted by the contacts between the antibodies. “It’s as if they link arms together to form a stronger complex,” said Dr Oyen. As far as the scientists are aware, this is the first time the three-dimensional structure of the repeat region of the circumsporozoite protein has been elucidated, thanks to the stabilizing inter-antibody contacts. “It’s only because of the multiple sequence repeats on this protein that these inter-antibody contacts are possible,” Dr Oyen said.

“This structure is very exciting–the four amino-acid repeat sequence by itself had been experimentally found many years ago to form a beta-turn and the multiple repeats predicted to helical-type structures, but this structure is very different from those as it is a very wide and very elongated corkscrew like a grand spiral staircase,” said Dr Ian Wilson, Hansen Professor of Structural Biology at Scripps Research, chair of the Department of Integrative Structural and Computational Biology and co-corresponding author of the study.

The antibody shown with the circumsporozoite protein in this study is just one of many that the team plans to image with cryo-EM. They hope to compare structures to see if protective antibodies share any features. Some might have inter-antibody contacts, some might not.

“We want to make the malaria vaccine as good as possible,” Dr Oyen said. “And we’re hoping we can use these cryo-EM structures to design new or improved vaccine candidates.”

The paper was published recently in Science Advances.