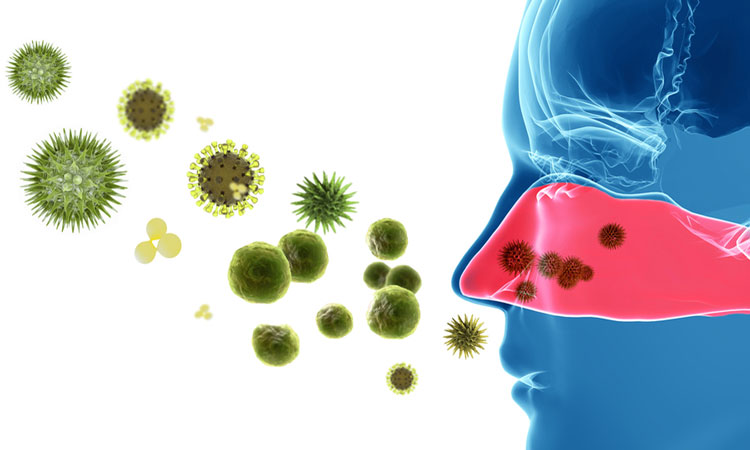 Researchers from Massachusetts Eye and Ear have found that exosomes are immediately secreted after we inhale bacteria through the nose. Theses tiny sacs of fluid attack the bacteria and shuttle protective antimicrobial proteins from the front of the nose, through to the back of the nose in order to protect other cells before the bacteria gets too far into the body.

“Similar to kicking a hornets nest, the nose releases billions of exosomes into the mucus at the first sign bacteria, killing the bacteria and arming cells throughout the airway with a natural, potent defense” said senior author Dr Benjamin Bleier, a sinus surgeon at Massachusetts Eye and Ear and Associate Professor of Otolaryngology at Harvard Medical School. “It’s almost like this swarm of exosomes vaccinates cells further down the airway against a microbe before they even have a chance to see it.”

The research team identified how cells near the front of the nasal cavity triggered a receptor called TLR4. This stimulates the release of exosomes, which activates an immune response within five minutes.

The team described how the body doubles the number of exosomes released into the nose, and also doubles the amount of nitric oxide synthase. This enzyme act as a protective antibiotic molecule that arms the exosomes against the bacteria.

Mucocilliary clearance was also shown to aid the exosomes, by sweeping the activated ones towards the back of the nose, with information from the cells that have already been alerted to the presence of bacteria, arming them with defensive molecules and proteins. This, in turn, prepares cells toward the back of the nasal cavity to fight off the bacteria.

The team grew cells in culture using samples of patients’ mucus, and simulated exposure to bacteria. They then measured the number and composition of the exosomes released, and found that they, along with the antibacterial molecules, doubled after the simulation.

The findings were repeated and confirmed in living patients. The team also found how the exosomes were taken up by endothelial cells, where they could ‘donate’ their antimicrobial properties.

“The nose provides a unique opportunity to directly study the immune system of the entire human airway – including the lungs,” said Prof Bleier.

The team believe their findings can contribute to the way scientists design methods of drug delivery techniques.

The study was published in the Journal of Allergy and Clinical Immunology (JACI).