In a recent study in mice, researchers have found a way to deliver specific drugs to parts of the body that are exceptionally difficult to access. 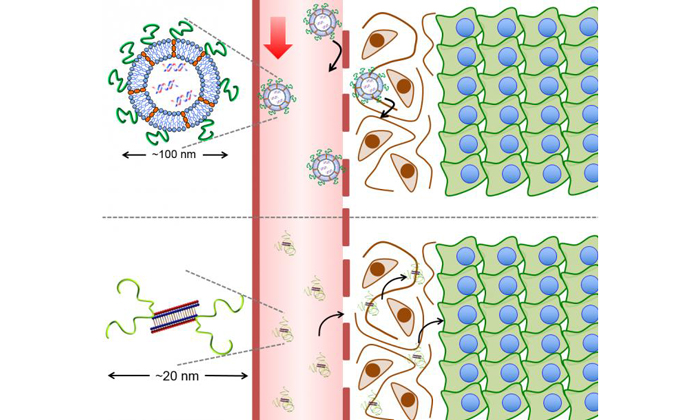 The researchers' nanomachine is just under 20 nanometers (nm), around the size of a microchip transistor (credit: © 2019 Kanjiro Miyata)

The researchers’ Y-shaped block catiomer (YBC) binds with certain therapeutic materials to form a package that is 18 nanometers wide – this is less than one-fifth the size of those produced in previous studies, so can pass through much smaller gaps. This allows YBCs to slip through tight barriers in cancers of the brain or pancreas.

A promising field in the fight against cancer is gene therapy, which targets genetic causes of diseases to reduce their effect. The idea is to inject a nucleic acid-based drug into the bloodstream – typically small interfering RNA (siRNA) – which binds to a specific problem-causing gene and deactivates it. However, siRNA is fragile and needs to be protected within a nanoparticle or it breaks down before reaching its target.

“siRNA can switch off specific gene expressions that may cause harm. They are the next generation of biopharmaceuticals that could treat various intractable diseases, including cancer,” explained Kanjiro Miyata, associate professor of the University of Tokyo, who jointly supervised the study. “However, siRNA is easily eliminated from the body by enzymatic degradation or excretion. Clearly a new delivery method was called for.

“We used polymers to fabricate a small and stable nanomachine for the delivery of siRNA drugs to cancer tissues with a tight access barrier,” Miyata continued. “The shape and length of component polymers is precisely adjusted to bind to specific siRNAs, so it is configurable.”

The team’s nanomachine is called a Y-shaped block catiomer because two component molecules of polymeric materials are connected in a Y-shape formation. The YBC has several sites of positive charge which bind to negative charges in siRNA.

The number of positive charges in YBC can be controlled to determine which kind of siRNA it binds with. When YBC and siRNA are bound, they are called a unit polyion complex (uPIC), which are under 20 nanometers in size.

“The most surprising thing about our creation is that the component polymers are so simple, yet uPIC is so stable,” Miyata concluded. “It is early days but I hope to see this research progress from mice to help treat people with hard-to-treat cancers one day.”