MIT engineers have designed tiny robots that can help drug-delivery nanoparticles push their way out of the bloodstream and into a tumour or another disease site. 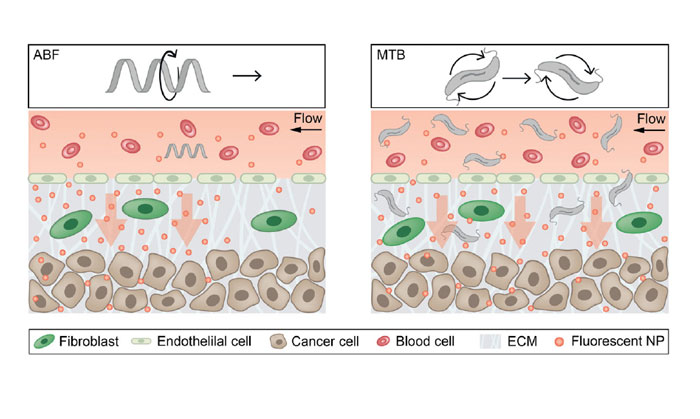 The magnetic microrobots could help to overcome one of the biggest obstacles to delivering drugs with nanoparticles: getting the particles to exit blood vessels and accumulate in the right place: “When you put nanomaterials in the bloodstream and target them to diseased tissue, the biggest barrier to that kind of payload getting into the tissue is the lining of the blood vessel,” said Sangeeta Bhatia, the John and Dorothy Wilson Professor of health sciences and technology and electrical engineering and computer science, a member of MIT’s Koch Institute for Integrative Cancer Research and its Institute for Medical Engineering and Science, and the senior author of the study.

“Our idea was to see if you can use magnetism to create fluid forces that push nanoparticles into the tissue,” added Simone Schuerle, a former MIT postdoc and lead author of the paper, which appeared Science Advances.

The MIT team decided to explore whether the forces generated by magnetic robots might offer a better way to push the particles out of the bloodstream and into the target site.

The robots are 35 hundredths of a millimeter long, similar in size to a single cell, and can be controlled by applying an external magnetic field. This bioinspired robot, which the researchers call an “artificial bacterial flagellum,” consists of a tiny helix that resembles the flagella that many bacteria use to propel themselves. These robots are 3D-printed with a high-resolution 3D printer and then coated with nickel, which makes them magnetic.

To test a single robot’s ability to control nearby nanoparticles, the researchers created a microfluidic system that mimics the blood vessels that surround tumours. The channel in their system, between 50 and 200 microns wide, is lined with a gel that has holes to simulate the broken blood vessels seen near tumours.

Using external magnets, the researchers applied magnetic fields to the robot, which makes the helix rotate and swim through the channel. Because fluid flows through the channel in the opposite direction, the robot remains stationary and creates a convection current, which pushes 200-nanometer polystyrene particles into the model tissue. These particles penetrated twice as far into the tissue as nanoparticles delivered without the aid of the magnetic robot.

This type of system could potentially be incorporated into stents, which are stationary and would be easy to target with an externally applied magnetic field. Such an approach could be useful for delivering drugs to help reduce inflammation at the site of the stent, Bhatia says.

The researchers also developed a variant of this approach that relies on swarms of naturally magnetotactic bacteria instead of microrobots.

For this study, the researchers used a type of bacteria called Magnetospirillum magneticum, which naturally produces chains of iron oxide. These magnetic particles, known as magnetosomes, help bacteria orient themselves and find their preferred environments.

This bacterial approach could be better suited for drug delivery in situations such as a tumour, where the swarm, controlled externally without the need for visual feedback, could generate fluidic forces in vessels throughout the tumour.

Bhatia now plans to collaborate with Schuerle to further develop both of these magnetic approaches for testing in animal models.