Salk scientists discover a pair of enzymes that drive non-small-cell lung cancer by promoting inflammation which could inform the development of new therapies. 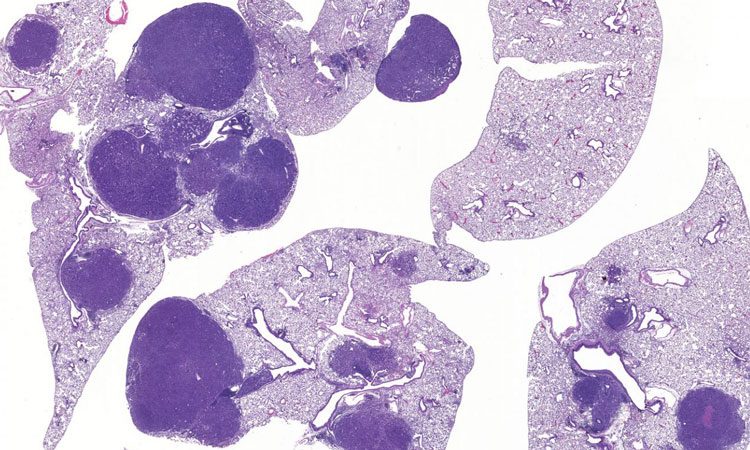 Salk Institute researchers have discovered precisely why inactive LKB1 (the mutated gene within non-small-cell lung carcinomas – NSCLC) results in cancer development. According to the team, the findings could lead to new therapies for NSCLC.

They have shown how LBK1 communicates with two enzymes that suppress inflammation in addition to cell growth, to block tumour growth.

“For the first time, we’ve found specific direct targets for LKB1 that prevent lung cancer and discovered – very unexpectedly – that inflammation plays a role in this tumour growth,” said Professor Reuben Shaw, director of the Salk Cancer Center and senior author of the paper. “With this knowledge we can hopefully develop new treatments for this large fraction of lung cancer patients.”

When functioning normally, LKB1 acts as a tumour suppressor, actively preventing cancer from forming. LKB1 works by passing cellular signals to kinases, that then passes the signal to other enzymes in a chain reaction. LKB1 leads this action, while the 14 different kinase follows. But which of these kinases is specifically responsible for carrying on LKB1’s tumour suppressive function has been unclear.

To figure it out, the team used CRISPR technology combined with genetic analysis to inactivate each suspected kinase one at a time and then in combinations. They observed how the inactivations affected tumour growth and development in both cell cultures of NSCLC cells and in a genetic NSCLC mouse model.

…when LKB1 or SIK1 and SIK3 become mutated in tumours, inflammation is increased, driving tumour growth

The experiments pointed the researchers to two kinases: SIK1 had the strongest effect in stopping tumours from forming. When SIK1 was inactivated, tumour growth increased and when a related kinase, SIK3, was also inactivated, the tumour grew even more aggressively.

LKB1 is also known to play a role in suppressing inflammation in cells generally, so the researchers were intrigued to discover that SIK1 and SIK3 were specifically inhibiting the cellular inflammation response in lung cancer cells. Thus, when LKB1 or SIK1 and SIK3 become mutated in tumours, inflammation is increased, driving tumour growth.

Next, the researchers plan to further investigate how these kinase-driven switches in inflammation trigger lung tumour growth in NSCLC.

The study was published in the online version of Cancer Discovery.