The cause and trigger of the large clumps of protein beta-amyloid found in the brains of early-stage Alzheimer’s patients have been discovered. 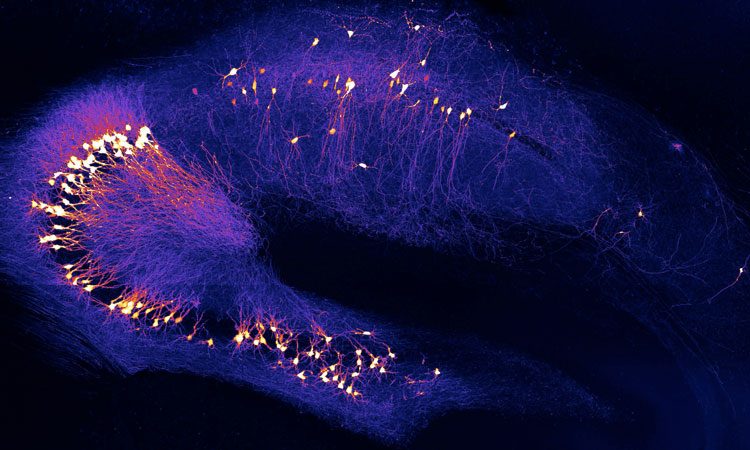 Neurons in the hippocampus, a brain region for learning and memory that is already at an early stage of Alzheimer's disease (credit: Yonghai Zhang and Arthur Konnerth/TUM).

A research team has identified the cause and trigger of the large clumps of protein beta-amyloid (plaques) that are found in the brains of Alzheimer’s patients who have already developed clinical symptoms. The discovery may open the way to new therapeutic approaches.

“It’s crucial that we detect and treat the disease much earlier,” explained Professor Arthur Konnerth, Hertie Senior Professor of Neuroscience at the Technical University of Munich (TUM), Germany. “We therefore focused on hyperactive neurons, which occur at a very early stage – long before patients develop memory loss.” As a consequence of hyperactivation, connected neurons in the circuits constantly receive false signals, leading to impairments in signal processing.

Together with his doctoral student Benedikt Zott and the entire research team, Konnerth has discovered that high concentrations of glutamate persisted too long in the synaptic cleft of hyperactive neurons. This was due to the action of beta-amyloid molecules, which blocked glutamate transport out of the synaptic cleft. The team tested the mechanism using beta-amyloid molecules from patient samples and by using various mouse models obtaining similar results with both approaches.

The team discovered that the neurotransmitter blockade was mediated by an early soluble form of beta-amyloid and not by the plaques. Beta-amyloid occurs initially as a single molecule form and then aggregates to double-molecule forms (dimers) and larger chains resulting, eventually, in plaques. The researchers found that glutamate blockade is caused by the soluble dimers.

“Our data provide clear evidence for a rapid and direct toxic effect of a particular beta-amyloid type, the dimers,” added Benedict Zott, first author of the study. “We were even able to explain this mechanism.”

The researchers now want to use this knowledge to further improve their understanding of the cellular mechanisms of Alzheimer’s and to support the development of strategies for treatment at the early stages of the disease.

The study appeared in the journal Science.