A team has developed a technique for identifying pluripotent stem cells that could help research on transplantation medicine.

A new nanotechnology has been developed which could boost research on stem cell transplantation. According to the team behind the method, the platform could help patients with neurodegenerative diseases and central nervous system (CNS) injuries by identifying pluripotent stem cells for use in transplantation medicine.

The research was conducted at Rutgers University-New Brunswick, US. The technique uses tiny rods for a non-destructive, selective and sensitive detection platform. This allowed the researchers to confirm the identity of human stem cells and their biomarkers without destroying them.

“One of the major hurdles in the current cell-based therapies is the destructive nature of the standard cell characterisation step. With our technology, we can sensitively and accurately characterise the cells without compromising their viabilities,” said senior author Professor Ki-Bum Lee.

Controlling and characterising stem cells is a critical issue to address before transplantation medicine can be fully developed. Current methods destroy cellular activities and functions, making it difficult to conduct more definitive research that could lead to biomedical applications.

The new nanotechnology the researchers developed is a multifunctional magneto-plasmonic nanorod (NR)-based detection platform. The team were able to successfully monitor the generation of neurons from human stem cells by characterising next generation biomarkers called exosomes. These cells play a critical role in cellular communication. 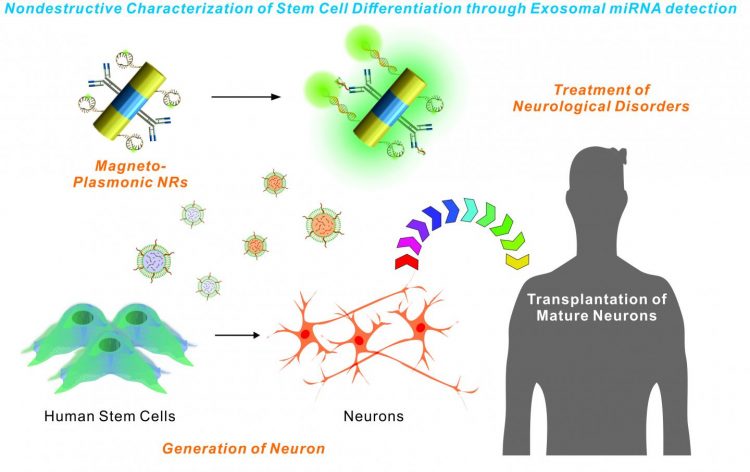 The scientists’ nanotechnology platform uses special rods with nickel and gold to detect microRNA inside exosomes, next generation biomarkers. The scientists successfully monitored the generation of neurons from human stem cells by characterising exosomes without destroying them (credit: Jin-Ho Lee/Rutgers University-New Brunswick).

The findings were published in ACS Nano.

One response to “Nanotechnology platform could improve stem cell transplantation”