A genetic mutation that causes idiopathic pulmonary fibrosis has been identified and could lead to a new therapeutic approach to treating the disease. 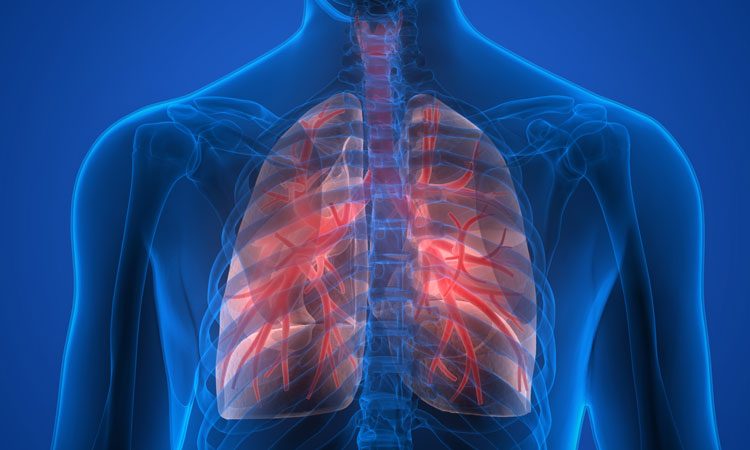 A genetic mutation that causes a severe lung disease called idiopathic pulmonary fibrosis (IPF) by killing the cells lining the lung’s airways has been identified. Protecting these cells by inhibiting a cell death pathway called necroptosis could, according to the researchers, be a new therapeutic approach to treating IPF.

Dr Koji Yasutomo and colleagues have previously studied IPF, revealing a mutation – dubbed T622C – in both copies of a gene called SFTPA1 carried by those with the disease. This gene encodes a protein, surfactant protein A1, that is secreted by the cells lining the lung’s alveoli. This usually helps to prevent the alveoli from collapsing and protects them from bacterial infection.

For this study, researchers from Tokushima University Graduate School of Medicine, Japan generated mice carrying the T622C mutation and found that they, too, developed idiopathic pulmonary fibrosis. Similar to IPF patients, the animals’ condition was fatally exacerbated by influenza A infection. “This strongly suggests that the mutation we identified in human SFTPA1 was the cause of IPF in this family,” Yasutomo said.

They determined that the T622C mutation in STFPA1 blocks the protein’s release from alveolar cells, causing the cells to die via necroptosis. They also found that, instead of being secreted, the mutant form of SFTPA1 builds up inside the alveolar cells and activates a cellular stress pathway that boosts the levels of necroptosis-promoting proteins.

Blocking this stress pathway, or otherwise reducing the levels of these necroptosis-promoting proteins, slowed the development of IPF in SFTPA1 mutant mice and allowed them to survive influenza A infection.

“Our study suggests that necroptosis is one of the crucial initiators of pulmonary fibrosis and that the necroptosis signalling pathway could be a potential target for its treatment,” Yasutomo added.