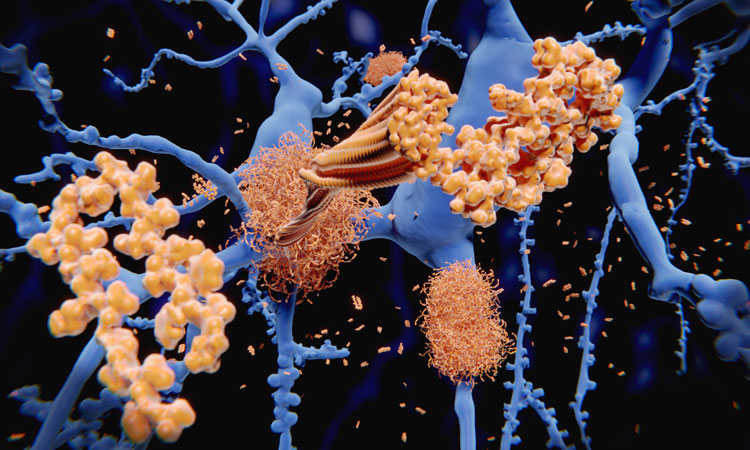 A new study from IFM Therapeutics, LLC has demonstrated that NLRP3 inflammasome activation is required for tau pathology both directly and downstream of amyloid beta (Aβ), in tauopathies (such as frontotemporal dementia) and Alzheimer’s disease. This suggests that patients with these disorders could benefit from NLRP3 antagonists.

Tau protein is critical to maintaining healthy brain function in that it stabilises neuron microtubules. Tau hyperphosphorylation and aggregation of tau proteins form the core of neurofibrillary tangles (NFTs), which are shown to be one of the pathological hallmarks of Alzheimer’s disease (AD). Primary tauopathies, such as frontotemporal dementia (FTD), are also present with neuroinflammation and cognitive deficits.

Aβ is a protein that accumulates in the brain between the neurons, disrupting communication between brain cells and eventually killing them, making it the primary cause of AD. Aggregation of tau proteins, which accumulates within neurons, occurs later. When Aβ is deposited, it causes a pathological innate immune response and activation of the NLRP3 inflammasome has been documented in the brains of patients with AD.

In the study of both patients and animal models, the scientists analysed cortex samples from patients with FTD and found elevated ASC levels and increased active caspase-1 and mature IL-1β, indicative of NLRP3 inflammasome activation.

In a mouse model designed to mimic human tau FTD mutations, the mice developed tau pathology over time and the presence of NLRP3 activation was also detected. It was also found that tau activated the NLRP3 inflammasome in an NLRP3-dependent manner.

“Our results indicate that the inflammasome and the inflammatory reactions it triggers play an important role in the emergence of tau pathology,” said Michael Heneka, MD, Director of the Department of Neurodegenerative Diseases and Gerontopsychiatry at University Hospital of Bonn. “This study provides a strong rationale for influencing tau pathology via the inhibition of the NLRP3 inflammasome. If tau pathology could be contained, this would be an important step towards a better therapy for those living with tauopathies and AD.”

“In showing that the NLRP3 Inflammasome directly leads to the decline associated with tau pathology in serious neurodegenerative diseases, this study underscores the potential of targeting this pathway,” added H Martin Seidel, Executive Vice President of Research and Development at IFM.