The body’s means of maintaining health are diverse and plentiful, and now researchers in Japan have identified another metaphorical string to its bow: the ability to prevent cell damage using cleanup clusterin proteins that channel damaged proteins for disposal. 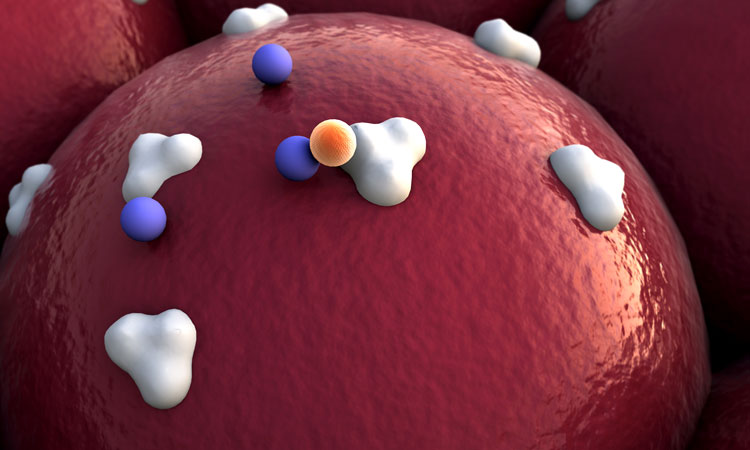 In a study at Chiba University, Japan, scientists have identified an important mechanism by which cells can clear away potentially destructive proteins from their external environment. Their research shows that a protein called clusterin combines with heparan sulfate proteoglycans, which are present on the surface of cells, to usher misfolded proteins into cells for degradation. The findings may lead to new therapeutic targets for neurodegenerative disorders, including Alzheimer’s disease.

Scientists believe that when misfolded proteins accumulate, they can damage neurons and other cells, leading to numerous forms of disease. To help prevent this damage, cells have developed numerous quality control systems that recognise misfolded proteins within the cell and either fold them back into their correct shape or else degrade them before they start to aggregate.

“However, approximately 11 percent of human proteins exist outside of the cell, where they are subjected to even more stresses that may cause them to misfold,” says Eisuke Itakura, an assistant professor in the Department of Biology at Chiba University in Japan. “In addition, Alzheimer’s disease, the most prevalent cause of dementia affecting 47.5 million people worldwide, is characterised by aggregates of amyloid β protein in the extracellular space. Despite this, how aberrant extracellular proteins are degraded remains poorly understood.”

What is understood, however, is that a protein called clusterin can bind to misfolded extracellular proteins and prevent them from aggregating. In the new study, Itakura and colleagues discovered that clusterin can escort misfolded proteins into the cell and deliver them to the cell’s means of disposal – the lysosomes – where they can be degraded. The team also discovered that, after binding to misfolded proteins, clusterin enters cells by binding to other proteins known as heparan sulfate proteoglycans, which are present on the surface of almost all human cells.

Itakura and colleagues found that, together, clusterin and heparan sulfate proteoglycans allow many different cell types to internalise and degrade a wide range of misfolded extracellular proteins. “We therefore think that this pathway is a general extracellular protein quality control system responsible for the clearance of misfolded proteins from diverse tissues and body fluids,” Itakura says.

In addition, the researchers found that clusterin and heparan sulfate proteoglycans can also import amyloid β (a marker of Alzheimer’s disease) into cells for degradation. Mutations in the gene encoding clusterin have been linked to an increased risk of developing Alzheimer’s, and experiments in rats have shown that injecting clusterin into the brain can prevent amyloid β-induced neurodegeneration. “Our results therefore suggest new avenues for the possible treatment or prevention of disorders such as Alzheimer’s disease that are associated with aberrant extracellular proteins,” Itakura says.

The study was published in the Journal of Cell Biology.