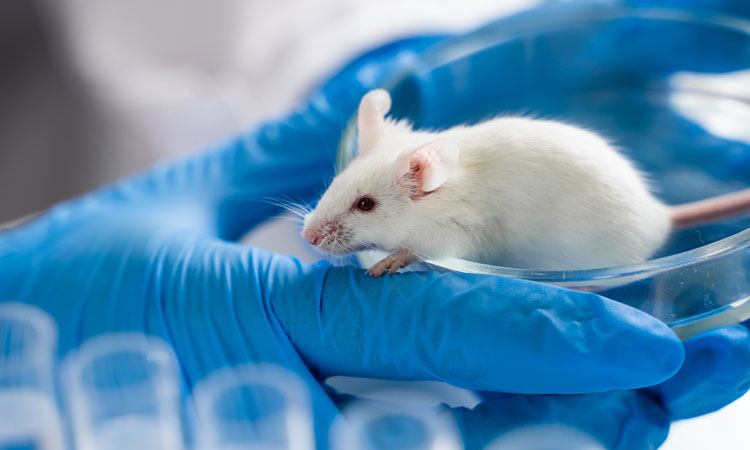 The team used the gene editing technology to generate mice that express human angiotensin-converting enzyme 2 (hACE2), the receptor that SARS-CoV-2 interacts with to initiate invasion of human cells.

According to the Wang and colleagues, their genetically edited mouse model has advantages over other mice genetically engineered to express hACE2 for modelling SARS-CoV-2 infection:

Infected via the airways

Once infected with SARS-CoV-2 via the nose, the mice showed evidence of robust viral RNA replication in the lung, trachea and brain. “The presence of viral RNAs in the brain was somewhat unexpected, as only a few COVID-19 patients have developed neurological symptoms,” said co-senior study author, Cheng-Feng Qin, of the Academy of Military Medical Sciences (AMMS) in Beijing, China.

The researchers identified that Clara cells, which produce a protein called CC10, were the main target of infection in the airways. They also reported that the mice developed interstitial pneumonia, a condition in which the air sacs and surrounding space are infiltrated by inflammatory immune cells which cause a thickening of the structures separating the air sacs and blood vessel damage.

The study revealed older mice had more severe lung damage and increased production of inflammatory cytokines, compared to younger mice. This is similar to how the disease presents in humans.

Infected via the stomach

The team administered SARS-CoV-2 to the mice through the stomach, two of the three mice in this experiment had high levels of viral RNA in the trachea and lung, which also had signs of inflammation. According to the authors, 10 times the dose of SARS-CoV-2 that was needed to establish an infection in the lungs was required to do the same via the stomach.

The team concluded that further studies may shed light on how SARS-CoV-2 infects the lungs and brain, and the resultant symptoms, as well as how the virus survives in the stomach.

“The hACE2 mice described in our manuscript provide a small animal model for understanding unexpected clinical manifestations of SARS-CoV-2 infection in humans,” said co-senior study author Chang-Fa Fan of NIFDC. “This model will also be valuable for testing vaccines and therapeutics to combat SARS-CoV-2.”

The study was published in Cell Host & Microbe.